Yesterday, I wrote to you about the turmoil in the markets… and the role the uncertainty around the Fed’s inflation-fighting interest rate policies is playing in it.

Now as I said, even with inflation above 8%, I don’t expect the Fed to follow through on its hawkish stance to the extent it has hinted at in recent months…

But the market will continue to be choppy and throw a tantrum any time a new interest rate hike is mentioned.

Yet even with so much turmoil in the market, one spot has steadily held its own – the U.S. dollar.

The strength and fate of the world’s primary reserve currency are common themes in the emails we receive from Inside Wall Street readers.

Several readers have been in touch in recent months to share their concerns about the possibility of the dollar being overtaken by other currencies.

But the dollar is not showing any signs of relinquishing its status as the world’s leading currency… In fact, right now, it’s on a winning streak.

Today, I’ll show you how the U.S. dollar has been performing in the face of global adversity… and why it is in such a position of strength right now…

Plus, I’ll also show you a way to play that in your portfolio…

I recently wrote to you about the rise of the U.S. dollar after World War II.

Today, it is the world’s primary reserve currency.

Foreign banks need dollars to conduct business and pay interest on borrowed funds. In 2018, banks in Germany, France, and the U.K. held more debt denominated in dollars than in their own currencies.

All this has helped the dollar reign supreme in recent years, as this chart shows.

The U.S. Dollar Index (DXY) is a measure of the U.S. dollar’s value relative to its most significant trading partners. Last year, it gained 6.4%. So far this year, it has risen another 8.3%. 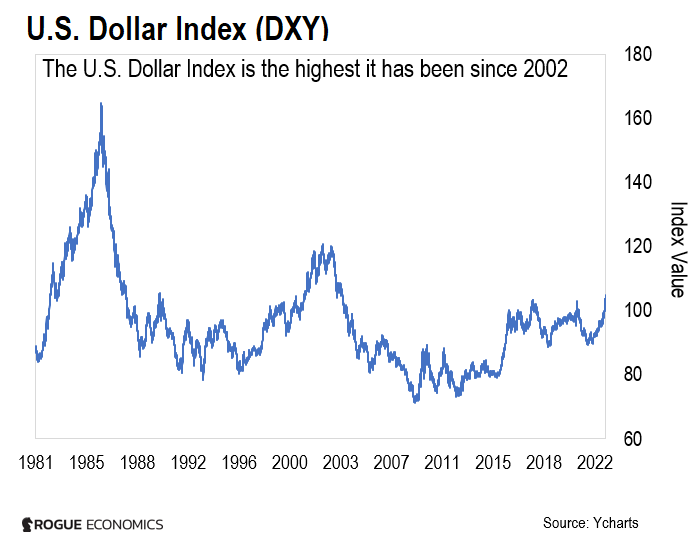 That’s up from 98.98 when I last wrote to you on this just two months ago.

That was at the start of the Cold War period that lasted from 1985 to 1991, when the Soviet Union split up into pieces.

Now, we have a renewed version of a Cold War. And today’s spike is due to investors fleeing toward a safe haven in the face of the war in Ukraine.

They’re also reacting to panicked markets, supply chain disruptions, and worries that ongoing inflation will bring a barrage of interest rate hikes from the Fed.

And all these factors could press the U.S. dollar still higher toward – or even past – the previous all-time high.

Why The Dollar Remains the Strongest World Currency

And today, there’s another key reason why the U.S. dollar is performing so well amidst market volatility.

The U.S. economy is strong compared to other economies.

In fact, a big part of the dollar’s rise stems from its appreciation relative to the euro. You can see that appreciation in the next chart of the exchange rate between the two currencies… 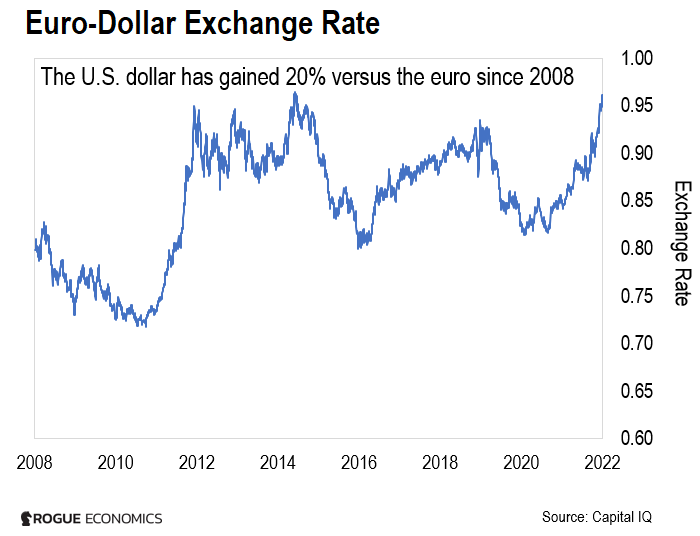 As you can see from the chart above, since 2008, the U.S. dollar has appreciated 20% relative to the euro. It is now at 0.96, having gained 4.3% since Russia invaded Ukraine in February.

That’s because the Russia-Ukraine war is hurting Europe’s economy more than the U.S. economy right now.

Europe has tighter economic ties with Russia. Plus, Europe gets 45% of its natural gas and a quarter of its oil from Russia.

Sharp rises in gas and oil prices have pushed European inflation to a record of 7.5% in April. That’s up from 1.3% a year earlier.

This shows a much faster rise than we’ve seen here in the U.S. This time last year, U.S. inflation was already at 5%. It shot up to 8.5% last month. And the most recent readings show a slight pullback.

Meanwhile, in Europe inflation is surging.

And as I wrote last week, if the European Union goes ahead with its proposed ban of Russian crude oil within the next six months, we can expect European prices to rise even further…

If this proposal gets voted into law, it will undoubtedly lead to fuel shortages and price hikes across the bloc.

So the U.S. dollar will likely continue to gain against the euro while war rages in Ukraine and uncertainty continues in Europe.

How to Make This Work For You

As you can see in this next chart, the U.S. Dollar Index (DXY) has been steadily climbing over the last year. 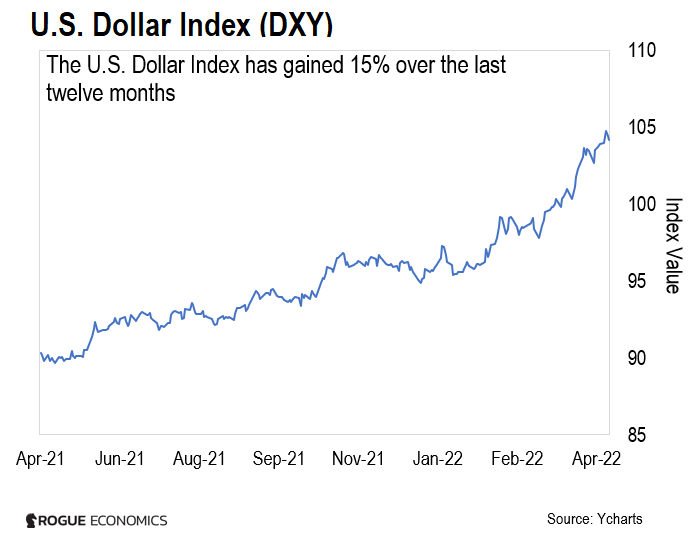 And hopefully, we won’t see geopolitical tensions rise to the levels we experienced back then…

But I do still see the dollar continuing to gain strength versus other currencies in the coming months as the war in Ukraine dominates the geopolitical arena.

Back in March, I wrote that the best way to play the rise of the U.S. dollar is to buy the ProShares Ultrashort Euro ETF (EUO).

This exchange-traded fund (ETF) rises when the U.S. dollar outperforms the euro.

Since I first recommended EUO, it’s gained about 10%.

But while the world remains on edge, I think it has room to rise further.