I’ve written a lot about the energy crisis and its link with our food supply this week.

And with energy prices up 30% in the last year, according to the latest U.S. inflation figures released yesterday, I hope you’ve been keeping up with my essays…

Because on Tuesday, I told you why rising energy prices will lead to higher food prices.

And yesterday, I wrote to you about the energy-related factors that will drive fertilizer prices up… which will catapult food prices higher, too.

And I showed you a couple of ways you can use your portfolio to make back some of the extra you’re spending on your monthly grocery shopping.

If you know where to invest, you can profit from the flood of money that’s going to hit the New Energy sector in the coming years.

Let me show you what I mean…

Now, I know not everyone feels the same way about climate change. But no matter what your views are on environmental matters, what’s coming down the tracks brings with it a huge opportunity to profit…

See, global governments put a price tag of up to $150 trillion on their plans to reach COP26 goals.

More recently, the war in Ukraine has been a major catalyst in their push for renewable energy and related technologies…

At the time, the European Union (E.U.) treaded softly.

It outlined a plan to become independent from all Russian fossil fuels “well before 2030.” And it announced plans to triple its renewable energy capacity by 2030.

But last month, it stepped things up a gear. It banned Russian coal imports.

And last week, it proposed phasing out Russian crude oil within the next six months.

If this proposal gets voted into law, it will undoubtedly lead to fuel shortages and price hikes across the bloc.

So the E.U.’s 27 member countries must now find alternative ways to power their economies… fast.

And if the E.U. goes ahead with its Russian oil ban, we can expect further price increases here. That’s because any sanctions have global ramifications on oil and gas prices.

So the race to ramp up production from renewable energy sources is on, both here and across the pond…

The Cost of Our Carbon Footprint

That’s where our New Energy theme comes in. It covers everything from renewable energy to cleaner infrastructure.

Essentially, New Energy is about reducing our carbon footprint. There’s a big push to cut back on carbon dioxide emissions, and to replace them with less harmful alternatives.

Perhaps one of the main reasons governments and industry alike are paying attention is that there is now a cost associated with our carbon emissions and consumption.

The airline industry is a great example. If you’ve booked a flight on Google Flights recently, you’ve probably noticed this:

Google shows you how much carbon dioxide each flight will emit. And it compares it with average emissions. Airlines will be charged for these emissions.

To stay competitive, the world has to transition to new sources of energy that emit less carbon.

The world’s governments have accepted that climate change is real. And this is unleashing a massive new investment trend.

$750 billion was spent on clean energy technologies and efficiency worldwide in 2021.

And as we’ve been telling you, the White House has allocated $100 billion to clean energy projects under the Bipartisan Infrastructure Law.

We’ve already shown you several ways to profit from the increasing investment in this sector. (Catch up here, here, and here.)

The search for alternative energy isn’t just a political battle cry. It’s something even the largest oil companies are embracing.

For example, BP has committed to shrinking its oil and gas production by 40%. It plans to invest $5 billion per year in low-emission businesses. Recently, it spent $220 million on a pipeline of 9 gigawatts (GW) of solar projects in the United States.

And oil and gas company, Total, invested $2.5 billion in an Indian renewable energy company. It aims to have 35 GW of gross renewable energy generation capacity by 2025 (up from around 9 GW today).

So with massive government investment in renewables on the way, more of the big energy companies are likely to follow suit…

The chart below comes from the U.S. Energy Information Administration (EIA). It tracks the trend of energy consumption needs globally through 2050.

And it shows the growth in renewable energy (blue line at the top) as well as traditional energy. 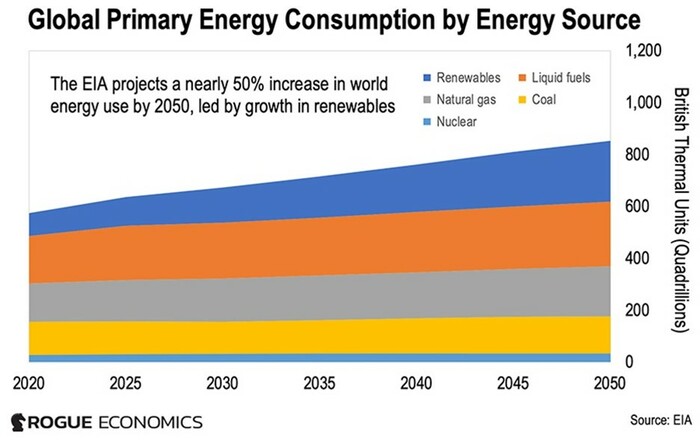 As you can see, the projection is for a 50% growth in the New Energy space.

And we’re already seeing rising demand. 2021 was another record year for renewable energy, according to the International Energy Agency (IEA).

The world added a record 295 GW of new renewable power capacity in 2021. That was despite the pandemic and rising costs for raw materials globally.

Now, from the chart above, we can see that traditional energy consumption will remain more or less flat.

But even in traditional energy production, carbon-neutral technologies will play a bigger and bigger role.

Even minor adjustments to their processes and maintenance routines could help companies reduce their energy consumption.

This transition to New Energy represents a windfall magnet for you. As I mentioned earlier, up to $150 trillion is about to flow into this sector.

As we’ve been showing you, global governments are backing the New Energy transition.

And even the traditional fossil-fuel giants are coming on board.

This does not mean that oil and gas will go away, or that I will ignore opportunities in the traditional energy space.

But as the energy crisis unfolds… and the E.U. and the rest of the world exerts more and more pressure on Russia… I will pay close attention to New Energy companies.

For now, I recommend keeping an eye on the best emerging energy sources. These include wind, solar, geothermal, next-generation nuclear, and carbon-capture coal.

And I’ll be sure to let you know how to invest as this trend develops. So stay tuned…

P.S. Millions of Americans are looking for ways to reduce their energy bills. And it’s no wonder… with energy costs up 30%, gasoline up 43%, and fuel oil up 80% in the last twelve months, according to the latest U.S. inflation figures.

The war in Ukraine is the latest catalyst in the energy crisis story… Global governments are quickly shifting gears to focus on alternative energy sources.

But there’s another huge event coming up that will put this trend into overdrive. In fact, it will shake the energy market to its core.

And the best part: If you know where to look, you could double… or even triple your money over the next twelve months. Click here now to watch my special presentation and find out more about this latest energy crisis… and how you can position yourself to profit.