If you have money invested in stocks, you may have had some sleepless nights over the last few months.

The S&P 500 is down 16% year-to-date. The Dow is down 12%. And the Nasdaq is down 25%. And violent swings several percentage points a day in either direction have been all too common.

On top of that, we’ve seen the highest inflation readings in four decades.

So your day-to-day spending is up, while your investment portfolio is likely down.

That’s a double-whammy for your money. And no doubt, you’re wondering what to do…

So today, I want to explain what’s going on in the markets… why you shouldn’t join the mass exodus from stocks… and why what’s happening is actually creating opportunity for those who know where to look…

Markets Are Reacting to Uncertainty

Basically, investors have been caught up in a storm of fear.

It’s mostly over whether or not the Federal Reserve will embark on a longer-term path of aggressively raising rates and reducing the size of its $9 trillion book of assets.

Markets hate uncertainty. Yes, there are other issues weighing on the market’s mind, such as inflation, the war in Ukraine, more supply chain disruptions, and potential recession. But the market is most upset about the Fed.

You see, the Fed took a “wait and see” approach to rising inflation last year, rather than actually doing something about it while it could.

Only when inflation had gone higher than it had in over four decades did the Fed finally kick into gear… sort of.

That’s because before that, interest rates were at zero, more or less. So they’re now in the range between 0.75% and 1%.

Some readers may remember when interest rates were around 20% in the Fed’s attempt to fight the double-digit inflation of the 1980s.

So the cost of money is still hovering around historically cheap levels.

And the Fed’s book of assets, courtesy of quantitative easing (QE), is still nearly $9 trillion, as you can see from this chart. 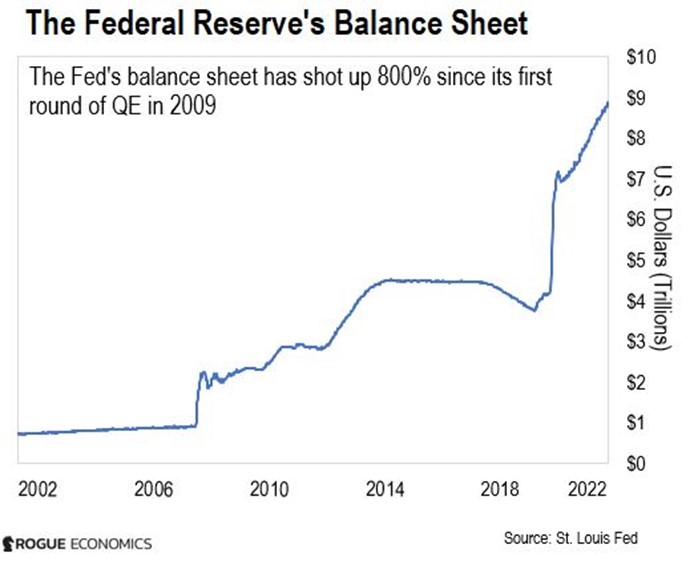 Now, the Fed has been talking about reducing its balance sheet of late. But don’t be fooled. It’s not actively selling any of its $9 trillion worth of assets at this point.

Instead, it’s letting bonds on its books mature naturally, or “roll off.” It’s not replacing them with new ones. That roll-off could result in up to $95 billion per month of quantitative tightening (QT) by August.

At that rate, it would take four years for the Fed’s book to get down to pre-pandemic levels. A lot can happen in four years.

This brings me to something important that I want to talk to you about.

The first rule about the Fed is to watch what it does, not what it says. Now, every so often, those two things will be the same.

But what the Fed does is key.

The Fed ignored inflation building in the real world for a year before it did anything at all on rates. Before that, it ignored the inflation of assets in the financial realm for many years.

This is all part of what I call The Great Distortion. It’s the disconnect between trillions in fabricated money from the Fed and other central banks flowing into the markets instead of the real economy.

While that money was flowing, the real economy was suffering from closures, supply shocks, and ongoing supply chain disruptions. And real inflation in everything from gas to food.

And now, the Fed’s stuck in this Catch-22 of its own making. It adopted an epically cheap monetary policy in 2008. Money remains cheap, even with the two recent rate hikes.

Fed leaders talk about being more aggressive with rate hikes (for example, 75 basis points at a time) and the speed of QT going forward.

But even if the Fed does go ahead with its plans, the cost of money is still historically cheap. And a major portion of its epic money fabrication remains in play for Wall Street and for the markets.

That’s why, at the end of the day, even with all the market volatility we’ve seen, markets will still have a cheap money supply.

That provides them with this massive trampoline. And if history is any guide, they will bounce back even stronger…

Cat and Mouse Game Between the Markets and the Fed

What’s going on in the markets is the equivalent of a toddler throwing a massive tantrum. We’ve seen it play out many times before, as I told you in an earlier essay.

And although the Fed may talk tough initially, it always caves to market pressure in the end.

I’m not saying it won’t raise rates. But I don’t think it will do so as aggressively as it has indicated before (say, 75 basis points in one go), or as the market fears.

This volatility around worrying about what the Fed does next is becoming a pattern. But there’s literally nothing the Fed can do – by raising rates or selling assets – to impact real inflation, anyway.

The Fed made a political decision aimed at taking pressure off itself for missing the inflation boat to begin with. It wanted to say, “Look, we did get it.”

But the Fed knows that selling its assets too quickly would hurt the markets too much. And raising rates too high would make servicing U.S. and other dollar-denominated debt too expensive. It could cause a recession.

Still, the markets are going to whipsaw every time someone from the Fed mentions “balance sheet runoffs” or interest rate hikes.

So I know that this market turbulence will pass.

That’s why we’re monitoring our five distortion sectors – for opportunity.

Because of distortion, these dips, as hard as they are to take, are truly opportunities for you, if you have some money on the sidelines.

The market may not always move as quickly to the upside as we’d like. But it is resilient. So please, stay as patient and as calm as you can.

And I’ll talk to you again soon.