All eyes are on the Eccles Building in Washington this week…

That’s where the Federal Open Market Committee (FOMC) will meet tomorrow and Wednesday to discuss the Fed’s plans for interest rates.

In last Thursday’s essay, I discussed why I believe the Fed will adopt a less aggressive stance on hiking interest rates than it originally announced in January.

Today, I want to talk to you about the relationship between interest rates and the U.S. dollar. That’s where the investment opportunity lies in these volatile times. I’ll explain that shortly.

But first, let’s consider the landscape of our current volatile financial environment.

That wasn’t a surprise, given the spike in food and oil prices we’ve seen in recent months. Especially since the invasion.

Now, one way central banks can fight inflation is to raise interest rates. The more expensive money is, the less people are inclined to borrow and spend. Rate hikes have certainly been on the table.

But when the Fed raises interest rates, it can cause the U.S. dollar to appreciate relative to other currencies.

That’s because if the Fed raises rates, it usually causes the interest rates for U.S. Treasury bonds to increase, too. These higher yields attract money from investors abroad seeking higher returns. That pushes up the value of the U.S. dollar relative to other currencies.

If the Fed raises rates and other major central banks don’t, the U.S. dollar will strengthen. But the Fed won’t want it to get too strong.

That’s because if the U.S. dollar gets too strong, it will be more expensive for other countries to create all the products we import. And that would push up inflation here even further.

The media isn’t really focused on this right now. But it’s an important point to keep in mind because it has a big impact on your money.

Another reason the Fed likely won’t raise rates is that doing so risks upsetting the markets. U.S. stock markets are volatile at the moment. They’re reacting to news from Ukraine, the White House, and elsewhere.

So the Fed has to balance wanting to fight inflation with wanting to avoid upsetting the markets.

As I explained last month, global central banks have indirectly poured trillions of dollars into the stock markets since the Distortion era began. The Covid-19 pandemic accelerated this process.

In the U.S., the Fed has created $5 trillion of new money since then. Its book of assets swelled from $4 trillion to $9 trillion. And it cut interest rates to zero.

Now, the Fed is talking about its first rate hike since the pandemic. But as I told you last Thursday and above, that might not happen to the extent originally forecast.

The European Central Bank (ECB) is facing a similar problem. It has to contend with record-high inflation and the war in Ukraine threatening the European economy.

Before the war broke out, markets expected the ECB to raise rates by a total of 50 basis points between September and December this year.

But last Thursday, ECB president Christine Lagarde said the ECB won’t raise rates while it deals with the economic fallout from Russia’s invasion of Ukraine.

She was also vague about exactly when the ECB would scale back its bond-buying program. She said it would be “shortly” before raising rates, with net purchases “likely” stopping in the third quarter.

The Russia-Ukraine war has put the ECB in a precarious position.

Europe gets 45% of its natural gas from Russia. Sharp rises in gas and oil prices will cause higher European inflation. It’s already at a record 5.8%.

Over the long term, high inflation erodes economic growth. That’s because people and businesses have less money to spend.

The problem for the ECB is that European growth was already slowing down before the war in Ukraine broke out.

Raising interest rates would help fight inflation there. But because of permanent distortion, the ECB’s bias is to keep rates low to help the markets instead.

This is the case with the Fed as well, by the way. But it’s more pronounced for the ECB right now.

Comparatively low interest rates in Europe will keep the euro low versus the U.S. dollar.

The Rise of the U.S. Dollar

And it’s not just the euro.

The U.S. Dollar Index (DXY) measures the value of the dollar against a basket of six world currencies – the euro, the Swiss franc, the Japanese yen, the Canadian dollar, the British pound, and the Swedish krona. It gives a fair indication of the dollar’s value in global markets.

Over the last 10 months or so, the U.S. Dollar Index has been rising consistently. This indicates an overall strengthening. It is now at 98.98. 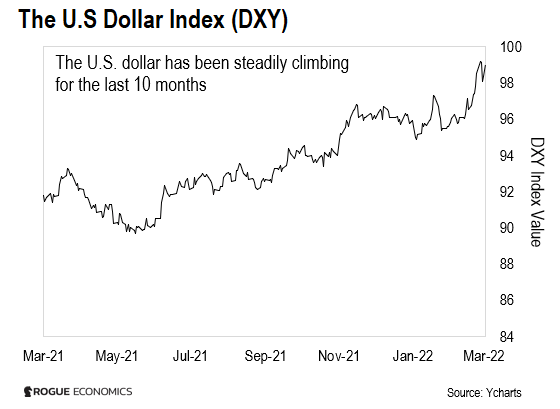 This recent rise is due to three factors.

First, it was the expectation that the U.S. economy would rebound from the pandemic and lockdowns more quickly than other economies.

Second, it was the forecast that the Fed would raise U.S. interest rates by 50 basis points this week, with more to come.

Then, it was the Russia-Ukraine war.

The war will hurt Europe’s economy more than the U.S. economy. That’s because Europe has closer economic ties to Russia.

In contrast, Russia was only the 23rd-biggest trade partner for the U.S.

Another reason the U.S. dollar will remain strong is because it is seen as a safe haven during times of geopolitical crisis.

The U.S. dollar is the world’s main reserve currency. That means global central banks have to keep a large supply of dollars and U.S. Treasuries on their books. This makes the U.S. dollar even more desirable.

How to Position Yourself Ahead of the FOMC Meeting

The best way to take advantage of near-term U.S. dollar appreciation is to buy the U.S. dollar.

There are two ways to do this.

The first is to buy the ProShares Ultrashort Euro ETF (EUO). This exchange-traded fund (ETF) focuses on the U.S. dollar outperforming the euro.

The second way is to buy the Invesco DB U.S. Dollar Index Bullish Fund ETF (UUP). This ETF goes up in value if the dollar appreciates against a basket of 6 major currencies, including the euro, the Japanese yen, the British pound, the Canadian dollar, the Swedish krona, and the Swiss franc.