Welcome to our Friday mailbag edition!

Every week, we receive some great questions from your fellow readers on our recently published essays. And every Friday, I answer as many as I can.

Today, we have questions on renewable energy, the Fed’s next move, and the influence of politics in the financial markets.

As I wrote to you recently, governments around the world are rushing into renewable energy. It’s part of the New Energy sector and the new energy transition I’m massively bullish on.

But not everyone is on board…

Thanks for writing in, Jim. Although I think you pose these questions in a rhetorical way to make a point about “renewables,” questions such as these are being answered daily by those pioneering the New Energy sector.

For instance, scientists at Stanford University have produced solar panels that can work in the dark. They would generate electricity around the clock, reducing the need for expensive storage batteries.

And scientists from Soochow University in China are using the friction created by raindrops landing on and running off solar panels to generate electricity.

Granted, we’re still years away from commercializing such technologies. But it’s probably going to happen eventually.

My point is that the solutions to humanity’s energy and economic problems keep coming. We are living in a golden age of innovation. And technologies being developed today will transform the lives of future generations.

Humanity has always overcome hardship by developing better tools. Whatever obstacles block our path, we will figure out ways to overcome them.

New Energy is a case in point.

Not so long ago, the manufacturing costs to build a solar panel or a wind turbine were prohibitively high. But innovation and economies of scale reduced those costs.

That’s why the cost of energy generated by solar plants has fallen by more than 80% since 2010.

As for your question about fusion…

Engineers are in fact also pushing their efforts on fusion. That’s the energy that’s created when two atoms merge together to form a heavier atom.

European scientists recently smashed the world record for the amount of energy they can extract by squeezing together two forms of hydrogen.

They produced 11 megawatts of power.

While this is not a massive amount of energy, it is a major breakthrough.

That’s because it’s more than double what engineers achieved in similar tests back in 1997. And it proves that nuclear fusion can be successfully recreated on Earth.

Does this mean that we need to stop innovating on other forms of energy? I don’t think so.

In fact, as I wrote last month, we’re expecting a 50% increase in renewable energy consumption by 2050. And yet, traditional energy sources, including oil and gas, will still have a role to play. And innovation will be needed to help make those more carbon neutral.

Below is that chart I showed you again, for convenience. According to the U.S. Energy Information Administration, nuclear energy won’t light up the skies just yet… 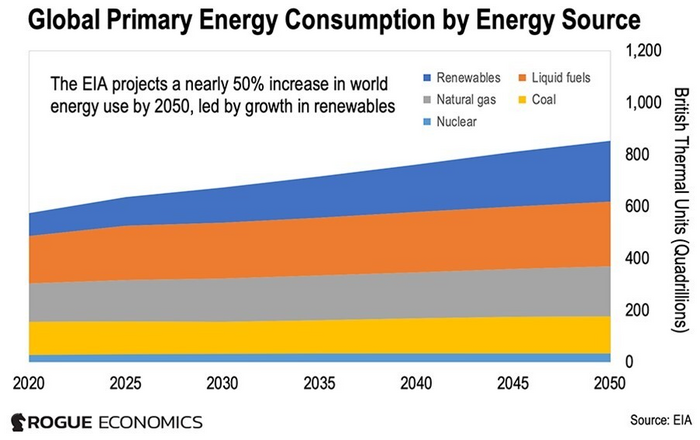 So, far from being a waste, any time or capital invested in developing renewable energy sources will be well spent. That’s why New Energy is one of my key investment themes.

And with $150 trillion expected to flow into the sector in the coming years, I believe now is the perfect time to get in on this megatrend to profit.

Next, the topic of the Federal Reserve’s next move is a common thread in these pages. And it’s something I believe is behind a lot of the volatility we’re seeing in the markets right now.

Reader Gordon took the time to write in with his thoughts…

I suspect that the Fed’s course over the next several months will be governed by their perception of the pain and anger of the American people. They are acutely aware that mid-term elections are coming in November, and they don’t want to become a big issue in those elections.

But they are – and will continue to be – torn as to whether continuing inflation or a collapse in the stock market is worse.

Ideally, they would like to reduce inflation while avoiding a bear market. And the worst outcome – from their point of view – would be both continuing high inflation and a major decline in the stock market.

Time will tell, but I doubt that things will turn out well, from their perspective.

Hi Gordon, I believe the Fed will walk back its hawkish position as soon as it can. Probably by late summer.

I’ve been saying this in these pages for a while now. And I said as much live on Fox Business on May 25, the day the Fed released the minutes of its May meeting.

But right now, the Fed is still caught in its narrative of promising to fight inflation. The problem is that we know the Fed has no control over the cost of food, fuel, or many other items.

And you’re right, the Fed doesn’t want the markets tanking as we approach the midterm elections. But it can’t admit this quite yet.

So it will wait to see if data comes in that indicates the economy is slowing or inflation is dropping (even a little). If either scenario plays out, the Fed will seize it as a reason to stop raising rates as quickly as it originally forecast it would.

It’s one of the reasons the Fed said it will be data-driven. (That’s usually code for the Fed wanting flexibility to change its mind.)

The next meeting will take place June 14-15. But the Fed is already sending out smoke signals.

San Francisco Fed President Mary Daly recently said she sees “a couple of 50 basis point hikes immediately in the next couple of meetings.”

But as in the past, this may well be a case of the Fed “talking the talk.” It remains to be seen if it will, in fact, walk the walk.

But as you say above, Gordon, the midterms aren’t too far off. So I think we can expect them to tame down that rhetoric pretty soon…

Finally, I recently shared an excerpt from my book It Takes a Pillage.

In it, I wrote about the shady financial techniques Wall Street firms and big banks used to carry out what amounted to a $140 trillion heist… and how they got away with it…

Following that, lots of readers got in touch with questions. I tried my best to answer them. But Douglas doesn’t think I went far enough, either in my book or in my responses…

Nomi, I believe you are only telling half of the story. You have left off the most important factor. Politics.

We have always had sub-prime loans. And most have been paid off. Some have not. The standards for getting a sub-prime loan were always high enough that most ordinary folks taking out a sub-prime did not get into financial trouble. But they certainly paid a higher price for their loan.

Enter politics. The elite decided that everyone was entitled to a home. So the standards for home-value-to equity and income-to-maximum home value and/or monthly payments allowed were relaxed. Truth be known, actually more than relaxed.

The politicians put pressure on the lender institutions to make the loans, or else. This brought a flood of new, unqualified buyers into the real estate market. Home prices took off, thus creating even more really toxic loans.

The banks realized the inevitable and created the leveraging, bundling, asset-backed securities, and CDOs. The system was not sustainable. Eventually, the bubble burst. And with it came plummeting home values followed by the “too-big-to-fail” bailouts. All part of the rigged financial system.

Now, I don’t pretend to be an expert on this matter. But YOU ARE. And I am disappointed that you did not include the FULL story on how the 2008 crisis really came about.

There is still time for you to complete the story and fill in the blanks with the WHOLE TRUTH.

Hi Douglas, thanks for your astute comments about the subprime crisis that led to the broader financial crisis of 2008.

In the excerpt I shared from my book, I covered why it wasn’t because ordinary citizens borrowed a little more than they could afford, as another reader suggested. It was because of Wall Street greed.

But you’re right. That’s only part of the story.

In It Takes a Pillage, I go on to explain the impact that legislation had on enabling, and even pushing, lenders to act as they did.

They offered subprime loans to people that didn’t understand how risky these loans were.

They failed to provide adequate explanations about their risk. Or, in some cases, they led borrowers to provide misleading financial information in order to get subprime (or high interest) mortgages.

So, yes, there were definitely political elements that enabled the financial companies to create a crisis.

That said, the math still indicates it was Wall Street that turned these loans into a crisis. Why?

Because as I wrote in It Takes a Pillage, defaults on subprime loans leading up to the financial crisis of 2008 totaled about half a trillion dollars.

But Wall Street concocted more than $14 trillion worth of what were later called “toxic assets.” These relied on the interest payments on these subprime loans.

So, the government was a catalyst. But Wall Street was the main culprit in making a problem a crisis.

Rest assured, though… Behind the scenes, I always consider the connection between Washington and Wall Street as it impacts markets and our economy.

I may not write about both each time I address a particular topic. Sometimes, I select an element of a story to focus on in an answer or excerpt or essay.

But the role both Washington and Wall Street play is always on my mind. And it’s something I’ll continue to unpack in these pages.

And that’s it for this week’s mailbag. Thanks again to everyone who wrote in.

If I didn’t get to your question this week, look out for my response in a future Friday mailbag edition.

I do my best to respond to as many of your questions and comments as I can. Just remember, I can’t give personal investment advice.

And if there are any other topics you’d like me to write about, I’d love to hear from you. You can write me at [email protected].

In the meantime, happy investing… and have a fantastic weekend!