“I don’t think we need to be concerned about the U.S. dollar losing its reserve currency status… not in the next 10 years, or in my lifetime…”

That’s what I wrote last month in response to a reader’s note about his fears for the dollar.

And I explained why the dollar has, in fact, continued to strengthen relative to other currencies. Especially since the pandemic and the war in Ukraine.

I believe the dollar’s strength and safe-haven status will keep it in pole position for many years to come. Even in the face of challenges from other currencies, notably the Chinese yuan.

But inspired by your interest in the topic, I promised to write some more about it…

And yesterday, I showed you another reason behind the dollar’s strength – its role in global oil markets.

Over 90% of global oil sales are priced in U.S. dollars. Hence the term “petrodollars.” This serves as a crucial support for the dollar’s reserve currency status.

But as I mentioned at the end of yesterday’s essay, China is challenging the U.S. dollar’s dominance. And that’s not going to stop.

So today, in the second of this two-part series, I’ll explain what China is doing and why.

…if you get paid in dollars or have any money in the commodities or currencies markets, this is a megatrend you’ll want to keep on your radar for years to come.

The Birth of the Petroyuan

China’s strategy to establish its currency revolves around oil…

It enabled any oil producer in the world to sell its oil for something besides U.S. dollars… in this case, the Chinese yuan.

The petroyuan was born.

This created a new, non-U.S.-dollar benchmark for the price of oil. It also allowed oil market participants to completely bypass the petrodollar system. That had never happened before in the petrodollar era.

It’s no surprise that China is using oil in its strategy to establish its currency on the world stage.

Oil is the largest and most strategic commodity market in the world. Every country needs it.

And if countries need a particular currency to buy oil, they have a very compelling reason to hold that currency.

As I mentioned above, the majority of global oil sales are in U.S. dollars. This creates a huge market for dollars around the world.

This gives the U.S. unmatched geopolitical power and helps it maintain its status as the world’s leading economy.

And that’s an issue for the world’s next biggest economy, China.

See, China is the world’s second-largest oil consumer, as you can see in this chart. 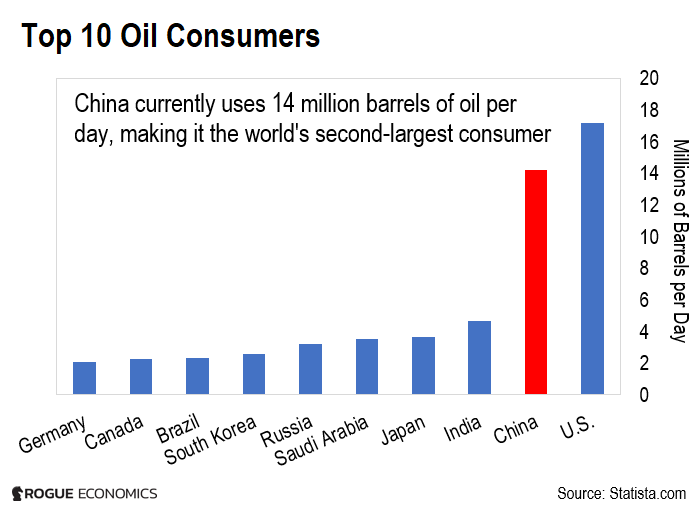 And according to estimates, by 2030, China’s daily oil consumption will rise by about 11% to 15.7 million barrels. You can see this in the chart below. 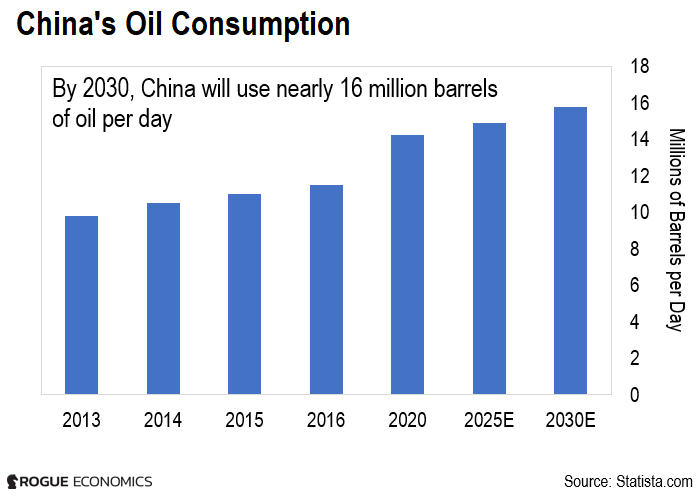 It’s easy to see why…

In fact, it’s forecasted to overtake the U.S. to become the world’s largest economy by 2030.

And as China’s economy grows, it’s going to be buying a lot more oil.

So being able to pay for its oil imports in yuan would be an enormous advantage for China.

Let me explain why…

Why China Is Pushing to Establish the Yuan

For one, it would mean China would no longer be affected by volatility in the foreign exchange rate. Or at least, the impact of any volatility would be reduced.

Second, it would reduce the potency of any threat by the U.S. to exclude China from the dollar-based financial system.

So establishing its own currency, the yuan, on the international stage would be a desirable outcome for China.

Recent U.S. sanctions on Iran over its nuclear program and on Russia in response to the Ukraine invasion also highlighted the potential risk of using dollars for China.

Finally, the U.S. government has had a huge advantage in being able to pay for its oil imports with its own currency, which it can create at will.

It’s hardly a surprise that China wants the same advantage.

Another strategy China is employing is a more geopolitical one… involving a key U.S. ally.

You’ll recall from yesterday’s essay how Saudi Arabia played a crucial role in maintaining the U.S. dollar’s world reserve currency status when President Nixon unpegged the dollar from the gold standard in 1971.

But relations between the U.S. and Saudi Arabia are deteriorating under President Biden. More specifically, the Saudis are frustrated with the Biden administration’s attempt to strike a deal with Iran over its nuclear program.

The U.S.’ perceived lack of support for Saudi Arabia’s intervention in the Yemen civil war likely also plays a role.

So China and Saudi Arabia may be finding common ground…

In March, the two countries kicked off “active talks” to price some Saudi oil sales to China in yuan instead of the U.S. dollar.

Meanwhile, China has ramped up its collaboration with the Saudis. For instance, it has helped the kingdom build its own ballistic missiles and consulted on a nuclear program.

It has also invested in Crown Prince Mohammed bin Salman’s pet projects, such as Neom, a futuristic new city.

The Saudis even invited China’s President Xi Jinping to visit later this year.

If Saudi Arabia begins conducting its oil business with China in yuan, it would be a smack in the face for the dollar.

Those sales would lend significant weight to the yuan worldwide.

The U.S. Dollar Will Retain Supremacy

China is challenging the petrodollar for dominance. There’s no denying that.

But the petroyuan hasn’t yet dented the dollar’s dominance. And I believe it’s a highly unlikely prospect.

As I mentioned yesterday, oil-producing countries need to be able to invest all the money they receive for their exports.

And no matter how many yuans you have, you can’t easily use or invest them anywhere outside China.

That’s because, unlike the U.S. dollar, the yuan is not a freely convertible currency. Its exchange rate against other currencies, including the U.S. dollar, continues to be managed by China’s central bank.

Beijing’s tight control over the yuan also partially explains why it hasn’t caught on with international investors.

And with regards to U.S.-Saudi relations, President Biden is said to be considering visiting Saudi Arabia in the coming weeks or months…

No doubt, this topic would be high on the agenda in any top-level meetings he might conduct while there… I’ll be sure to report on any significant developments.

So for the readers who shared their thoughts about the U.S. dollar’s reserve currency status, and the potential rise of the yuan, I hope this two-part series has put your minds at ease.

And if there’s anything else on your mind that you’d like me to write more about, drop me a line at [email protected].