In December 2020, he turned a static image of his five-word tweet into a digital file… stored it on a blockchain… and created a non-fungible token (NFT) out of it.

And in March 2021, crypto entrepreneur Sina Estavi bought that NFT… for $2.9 million.

Last month, Estavi tried to auction off the NFT for $48 million.

But there were few interested buyers. At writing, the highest bid is roughly $29,100.

Now, many pundits have interpreted the auction’s flop as the NFT bubble bursting.

But I believe the NFT story is just beginning…

And today, I’ll show you why NFTs are an essential part of a nascent trend that will revolutionize how we live, work, play… and profit.

What is an NFT?

Firstly, don’t worry if you’ve never heard of NFTs. They haven’t been around all that long. In fact, the first NFT dates back just eight years.

But already, they’ve become one of the biggest internet trends.

An NFT is a digital image of a real-world item such as a piece of art, a piece of real estate, jewelry, a video, a sports trading card, or a piece of music.

And as the name suggests, each NFT is unique. No two NFTs are the same.

That’s because NFTs are built on the blockchain. This is the digital database that underpins most cryptocurrencies (think Bitcoin or Ethereum). The blockchain is used to ensure each NFT is authentic.

NFTs took the art world by storm in 2021. That was when an NFT of American digital artist Beeple’s The First 5000 Days sold for $69 million.

NFTs have given a new form of expression to artists, athletes, and celebrities. They’ve also given them a new way to make money off their work.

Additionally, NFTs have provided corporations with a new asset to build marketing campaigns around. It’s no surprise that they’re being adopted by industries as diverse as gaming, finance, and art.

Now, the NFT market has slowed down in recent months.

And as I said above, market commentators are already calling time on NFTs.

But right across the board, markets are down. Even for more established asset classes.

Cryptos have also taken a hit. Bitcoin is down 18% and Ethereum is down 24% since the start of the year.

Even gold is down about 9% over the last two months or so.

A few things have had a huge effect on investor confidence. The war in Ukraine… spiraling inflation here in the U.S…. and the market’s fears about the Federal Reserve’s plans to increase interest rates.

But as I’ve already explained in these pages, I believe stocks, cryptos, and gold will rebound.

And I think leaving NFTs for dead would be a big mistake.

Let me explain why…

Down But Not Out

To me, the situation with NFTs right now reminds me of the dot-com bubble of the early 2000s. The bursting of that bubble was an extinction-level event for hundreds of tech companies. 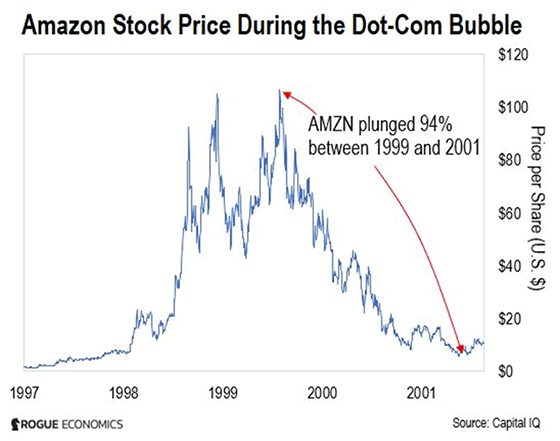 But if we zoom out and look at the big picture, the dot-com crash is an almost unnoticeable blip on the company’s long-term price chart. 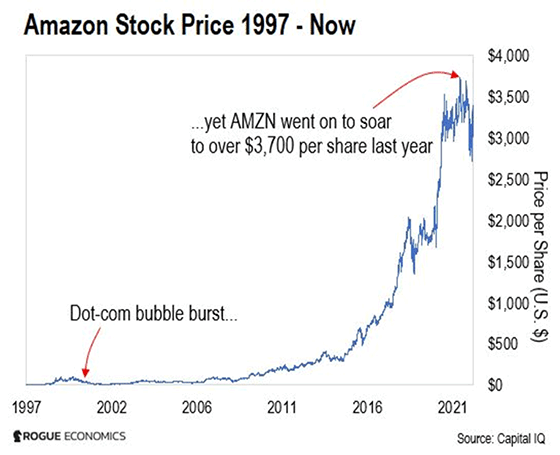 The same is true for Microsoft, Apple, Nvidia, Adobe, Intuit, and numerous other companies that survived the dot-com crash. Many went on to become industry dominators.

We have a comparable situation today with NFTs.

And like the bursting of the dot-com bubble, the recent bursting (or deflating) of the NFT bubble is a healthy development.

It will cleanse some of the irrational exuberance from the space and help separate the wheat from the chaff. And it will lead to higher-quality, more professional innovation in the space.

This doesn’t mean that every NFT will sell for millions of dollars. As with any market, there will be winners and losers. But the overall NFT trend will stick around.

Bottom line: Mr. Estavi may have misjudged the current market when he put the Dorsey tweet NFT up for sale last month. But he hasn’t misjudged the overall trend.

That’s because NFTs are part of a bigger trend in the blockchain world. That trend is called Meta-Reality.

Meta-Reality is where the real world and the digital world meet. It is based in a virtual environment. But using an avatar, you can “live,” work, and play there. Essentially, you can do pretty much anything you can do in the real world.

I know, it sounds far-fetched. Or maybe, you think it’s something from a sci-fi novel.

But, as I showed you in this recent essay, it’s already happening. And big-name companies like Disney, Microsoft, and JPMorgan are getting behind it.

I believe Meta-Reality will revolutionize multiple industries. That’s why it’s one of my five key investment themes.

NFTs are an essential part of that revolution. And they will create trillions of dollars in value in the process.

Look no further than the sports industry. NFTs of player cards and video clips of iconic sporting moments have already generated billions in revenue for sports leagues, teams, and individual athletes.

For instance, fans spent more than $800 million on digital collectibles of NBA highlights in 2021.

And global consultancy Deloitte estimates that more than $2 billion will be spent on NFTs for sports media this year. It says that up to 5 million people will own an NFT sports collectible by the end of 2022.

So how do you position yourself to profit?

First, you can simply own Ether (ETH). Ether is the native cryptocurrency of the Ethereum network. It is the second-largest crypto by market capitalization. Most NFTs are built on the Ethereum blockchain.

I expect Ether will surge in popularity as the Meta-Reality and NFTs are more widely adopted.

You could buy Ether on a crypto exchange such as Coinbase and store it in a crypto wallet.

Or you could purchase it through PayPal. The company offers a more convenient option for someone buying Ether for the first time. With PayPal, you can start your crypto portfolio with as little as $1.

So it’s a good solution if you only want to buy a small amount of Ether.

Alternatively, you could capitalize on the Meta-Reality trend by buying The Roundhill Ball Metaverse ETF (METV). This is an exchange-traded fund that’s listed on the Nasdaq.

It invests in companies with exposure to the growing Meta-Reality space such as Nvidia, Microsoft, Roblox, Tencent, and Unity, among others.