I had just started working at Lehman Brothers. I arrived home to my New York apartment late that night, exhausted after a fourteen-hour day.

I flipped on my TV and sat mesmerized by the green pulsing lights that signaled the bombing campaign in Iraq.

The next day on the trading floor was crazy.

Whenever any major surprise event happens overnight, it causes pandemonium in the markets the next day.

Sure enough, when I got to work earlier than usual the following morning, the equity traders on the floor were shouting on their phones.

But they were smiling, too.

There was a good reason for that. When tension is building around a growing conflict, it creates market uncertainty. This tends to hurt the stock market.

In the two weeks leading up to Congress’ authorization of Operation Desert Storm, negotiations with Iraq intensified. The S&P 500 tumbled more than 6%.

However, the day after Desert Storm – the U.S. operation to forcibly eject Iraq from Kuwait – launched, it was like the markets got an adrenaline shot in the arm. On January 17, 1991, the S&P 500 jumped 3.7%.

Here’s what I learned that day: The mere threat of geopolitical turbulence tends to cause stock markets to dive. That’s because markets don’t like uncertainty of any kind.

But stock markets rebound once that uncertainty is removed (either if the conflict is peacefully resolved or military action/war is declared).

We’ve Been Here Before

This same pattern played out at the start of the hostage crisis in Iran in 1979… when Iraq invaded Kuwait in August 1990… and immediately after the 9/11 attacks. 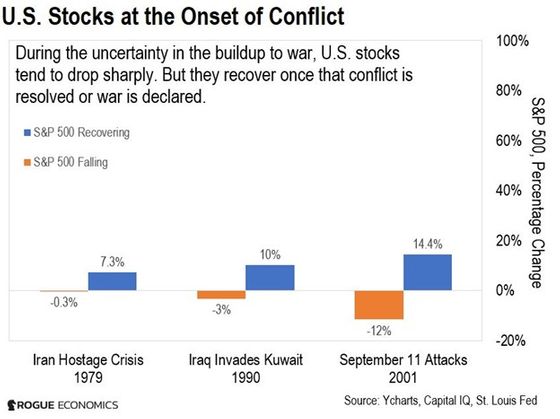 As you can see in the chart above, each time, the fear of war led to stocks falling.

That’s because in periods of looming physical danger or uncertainty, investors move away from paper assets such as stocks.

In the end, though, once the threat abated, this asset class reverted back to its trend.

But as you can see from the gold-colored line in this next chart, by April 2014, they had recovered… and even surpassed their previous level.

And that situation repeated in 2018 (the blue line on the chart), when there was another bout of tension in the region. From November 25 to December 24, U.S. stocks fell 13%. But once the dust from the incident settled, they rebounded 24%. 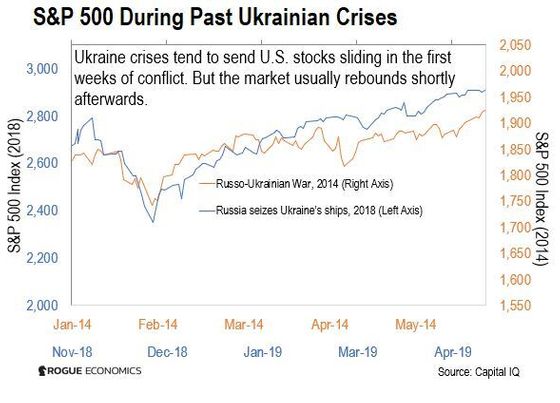 Same Pattern Is Playing Out Today

A similar pattern is unfolding now, due to the current iteration of the Russia-Ukraine conflict.

The recent Russian military maneuvers along the Ukrainian border prompted headlines showcasing the Biden Administration’s concern in mid-January. These concerns and headlines escalated through February.

Since the situation in Ukraine made the headlines here earlier this year, the U.S. stock market is down 11%, as you can see from this next chart… 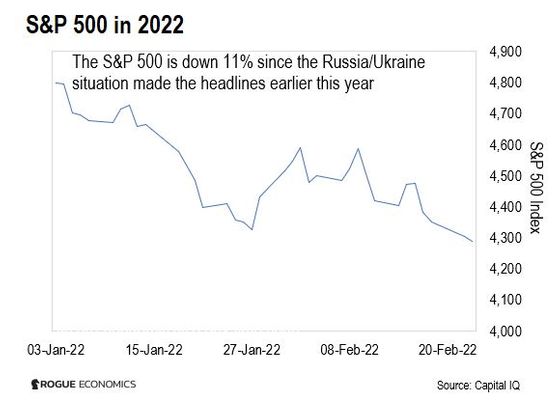 I don’t know what the resolution regarding the situation in Ukraine will be. But I believe stocks will rebound from these levels.

That’s because the stock market is anchored by the permanent distortion between the markets and the real economy.

This distortion was caused by the immense amount of money created by the world’s largest central banks, including the U.S. Federal Reserve.

So when I see wobbles in markets on days with more intense news from Ukraine, I know they’re temporary.

What the Ukraine Conflict Means for the Markets

Yesterday, President Biden announced new sanctions against Russia. This was in response to what he called “the beginning of a Russian invasion” of Ukraine. Putin had ordered Russian troops into two of Ukraine’s breakaway regions, in what he called “peacekeeping” missions.

And Biden is reported to be willing to go much further, if the situation in Ukraine escalates.

But Russia is already dealing with international financial sanctions.

The United States, the European Union, and other countries imposed these against certain Russian individuals and businesses in 2014. That was right after Russia invaded Ukraine in late February of that year.

They are still in effect. In January 2022, the EU announced an extension of its sanctions until July 31, 2022.

I don’t know what Russian president Vladimir Putin’s endgame is. But Russia’s military build-up in Ukraine may turn out to be more bark than bite.

At some point, the financial risks to Russia of greater, more prolonged sanctions could prove more costly than Putin anticipated.

There are many reasons for war, but most come down to money or power. Ultimately, Putin must weigh the economic and geopolitical cost of an outright, potentially global war.

If Putin pivots in any way from what he refers to as his “peacekeeping” stance of amassing Russian troops in Ukraine… or if the U.S. and Russia come to some sort of diplomatic détente… U.S. stock markets could stage a relief rally.

In the meantime, stock markets could remain choppy on any reports of military maneuvers in Ukraine. But I see these choppy episodes as an opportunity for you.

Because no matter what ultimately happens in Ukraine, the markets care more about money than conflicts.

This brings me to what all of this means for you.

In last Friday’s mailbag, reader Sarbelio J. expressed concern about what this conflict means for his money. I’m sure he’s not the only reader with that concern right now.

I promised to write about the patterns some of the key investment assets follow in the lead up to and during conflicts.

I can’t provide personalized investing advice. But I hope the research I outlined above gives you some good pointers for your stock portfolio.

I realize it’s hard to ignore the scary headlines about imminent war in Ukraine.

But in terms of what action to take in your portfolio right now… let me refer you back to my recent essay on volatility.

The key thing I learned about the markets from my 15 years on Wall Street came down to a World War II mantra: Keep calm and carry on.

That’s exactly what to do in the face of market uncertainty, like what we’re seeing due to the situation in Ukraine.

So if you are invested in the stock market, stick to your strategy. And be on the lookout for opportunities to buy your favorite stocks at a discount.