Last month, I wrote to you about an important benefit of Bitcoin – its hardness…

An asset’s hardness is a measure of how hard it is to produce. It is calculated by dividing its existing supply by the new annual supply.

For Bitcoin, that number right now is 54. This means at the current rate of supply of new bitcoins, it would take 54 years to equal the existing supply.

This makes Bitcoin one of the hardest assets out there. It’s second only to gold (62 years).

Holding hard assets like Bitcoin and gold in your portfolio can shield your wealth from the effects of governments’ crazy monetary policies.

And my essays on Bitcoin have resonated with readers, if the feedback I received in the mailbag is anything to go by. Thanks to everyone who took the time to write in to [email protected] with questions and comments.

So today, based on your interest, I want to delve deeper into the Bitcoin “halvings” I told you about in my previous essay. This is where the new Bitcoin supply drops by 50% roughly every four years.

If this is something you’ve heard about and it hasn’t quite made sense to you, you’re not alone.

But these halvings are instrumental in shaping a new vision of money and value in the crypto space.

And this ties neatly into the New Money investment theme I’ve put on your radar. This is where cryptocurrencies such as Bitcoin will continue to challenge the established financial players and fiat monetary system.

So today, I’ll walk you through what these halvings are. And I’ll explain why they create an opportunity to profit.

First, let’s nail down the basics.

Bitcoin mining is the process by which new Bitcoins are created.

Miners use large, powerful computing systems to solve complex mathematical problems. The first miner to solve each problem receives a reward in Bitcoin.

The mining process also confirms transactions on the cryptocurrency’s network. When you create a Bitcoin transaction, your wallet sends it to the “mempool.” Here, it waits to be verified by the miners.

This ensures that all transactions are validated and trustworthy.

And these validated transactions are then added to the crypto’s ledger. This ledger is called a blockchain.

About every 10 minutes, Bitcoin miners add a new block – or set of transactions – to the blockchain.

The higher the fee you pay for your Bitcoin transaction, the faster it will be finalized.

For each new block, miners earn the transaction fees. They also get a preset mining reward in Bitcoin.

But in a way, Bitcoin is like your smartphone. You don’t need to know how it transmits your calls and texts across the world in order to use it.

And you don’t need to understand the inner workings of Bitcoin to buy or profit from it.

But understanding the profit opportunity couldn’t be simpler.

Every four years or so, the reward miners receive for solving the mathematical puzzles gets cut in half. This is pre-programmed into Bitcoin’s immutable code. And it’s called “halving.”

Bitcoin has only been around since 2009. So far, it has been through three halvings.

The first one was in 2012. The Bitcoin reward dropped from 50 bitcoins to 25 bitcoins.

The most recent halving happened in 2020. So right now, the Bitcoin reward is 6.25 bitcoins.

The halvings will continue every four years. They will drastically slow down the rate of increase in the supply of new bitcoins. This will increase Bitcoin’s hardness.

This chart shows the dramatic fall in Bitcoin rewards over an extended timeline. 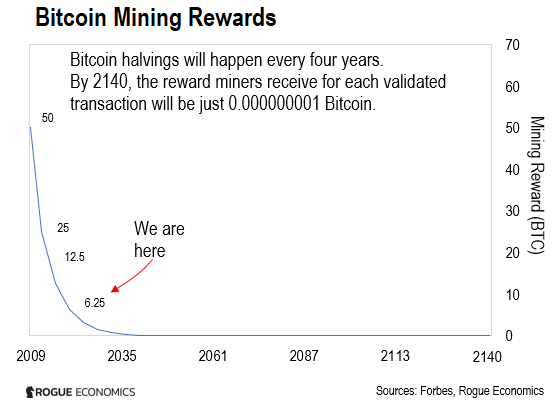 For miners, the process of mining Bitcoin will become more difficult and more expensive.

But for investors, the halvings spell opportunity…

Because as we all know, when an asset becomes more scarce – or harder – the price usually rises.

And Bitcoin’s track record after each halving event to date bears this out. Every time it had a halving event, its price exploded.

As you can see from this next chart, Bitcoin rocketed 8,845% higher within 12 months of the first halving in 2012. 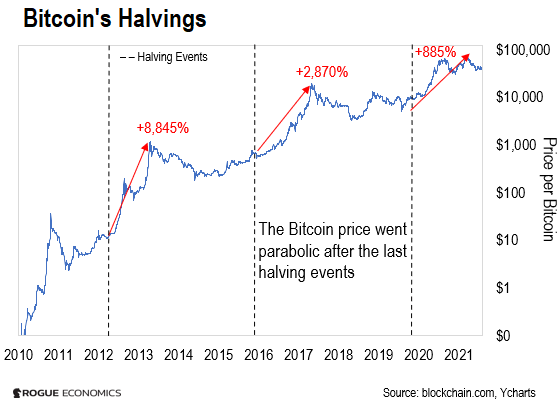 Returns have diminished in each halving cycle.

But the fact remains, each time we’ve had a halving event, we’ve seen the Bitcoin price skyrocket.

On the Way to Becoming the World’s Hardest Asset

As of writing, there are 18.98 million Bitcoins in existence.

There can never be more than 21 million Bitcoins. This is written into Bitcoin’s code. So the current supply is about 90% of the total potential supply.

Crucially, because of the halvings, the remaining 10% of new Bitcoins will be added at an ever-decreasing rate.

Roughly by the year 2140, all 21 million Bitcoins will have been mined.

But here’s the upshot: We don’t need to wait that long to reap the benefits of Bitcoin’s deflationary supply.

Because the amount of new Bitcoins is decreasing… and its total supply is limited… it will get harder over time.

As I told you last month, it is on track to become the hardest money the world has ever known.

This will draw a continued influx of deep-pocketed new investors (and regular buyers) attracted by Bitcoin’s anti-inflationary qualities.

That’s because as the number of new Bitcoins coming into existence decreases, each one will become more valuable.

Fortunately, there’s still time to get in on the action.

Bitcoin has only been around since 2009. And as I told you last week, there’s plenty of room for growth in the number of people and companies buying Bitcoin.

I believe the Bitcoin story still has a long way to run. So, if you haven’t yet, it’s not too late to buy Bitcoin.

There are many ways to do this. Buying it on a crypto exchange such as Coinbase and storing it in a crypto wallet is one.

But PayPal or Square’s Cash App may be more convenient options for someone buying Bitcoin for the first time. With both of these popular apps, you can start your crypto portfolio with as little as $1.

It’s a good solution if you only want to buy a small amount of Bitcoin.

Or consider using Swan Bitcoin. It’s a relatively new platform I’ve started using. It offers easy, regular savings options to convert your dollars to Bitcoin savings. And its fees are low compared to many larger platforms.

Just remember that cryptocurrencies are speculative assets, so treat your investment in Bitcoin accordingly.

And please, never invest money – in any asset class – that you can’t afford to lose.