Central banks are on a gold-buying spree.

They are already some of the largest holders of gold in the world. In total, global central banks hold 31,200 metric tons of the precious metal.

And over the last 11 years, they have been accumulating massive amounts of it. You can see this in the chart below. 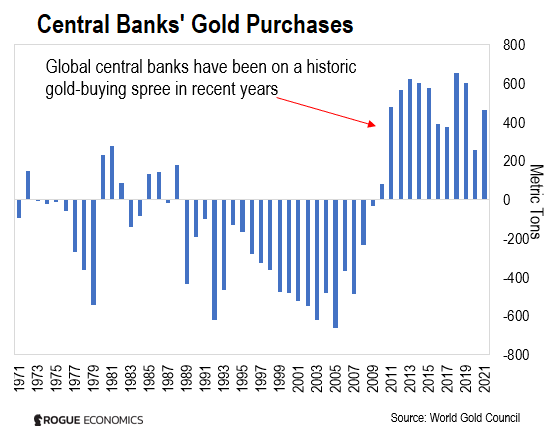 From 1989 to 2009, central banks around the world were net sellers of gold. But in 2010, they became net buyers. And since then, they have been buying gold in a big way.

They have added 5,678 metric tons of gold to their vaults. That’s 18% of their total holdings.

Last year alone, they added 463.1 metric tons of gold. That’s an 82% increase over the prior year.

It’s all part of the permanent distortion between the financial world and the real economy I’ve been writing to you about.

That’s because central banks’ epic money creation over the last two decades is what has made their gold-buying spree possible.

Today, in the first of a two-part series, I’ll show you why that buying spree spells opportunity for investors.

And tomorrow, I’ll show you a couple of simple ways to play it.

But first, a little background on why central banks are buying gold in the first place.

Now, don’t get excited. It’s not because they want to go back to the gold standard. That ship sailed in 1971, when President Nixon cut the U.S. dollar’s last link to gold.

Since then, central banks have been free to fabricate fiat money out of thin air.

And that’s exactly why they don’t want to return to the gold standard. They want to maintain the control they now have over their currencies.

However, they do need to hedge their bets. That’s why they’re now buying gold in huge quantities.

They like to have it in their back pocket… just in case there’s a monetary emergency and they need to restore confidence in their currencies.

And as I told you earlier this year, throughout history, gold has been seen as a safe-haven asset. It is a proven hedge against inflation.

Now, central bankers may brush off inflation concerns – even as inflation hits multiyear highs – saying any increases are unlikely to last.

But look at what they do, rather than what they say.

If central banks really believed inflation wasn’t going to be a problem, they would have pulled back on their gold purchases.

Instead, they are buying this traditional inflation hedge in huge quantities. And at an ever-increasing cost.

And as I explained in my recent essay, inflation isn’t going anywhere. Central banks know it, even if they don’t say it outright.

So, there’s no reason for them to stop their gold purchases right now.

And that’s a clear signpost to profit for anyone investing in the precious metal.

Money Is No Object

Gold has been on an upward trajectory since 2015. As you can see from the following chart, gold’s price has nearly doubled. 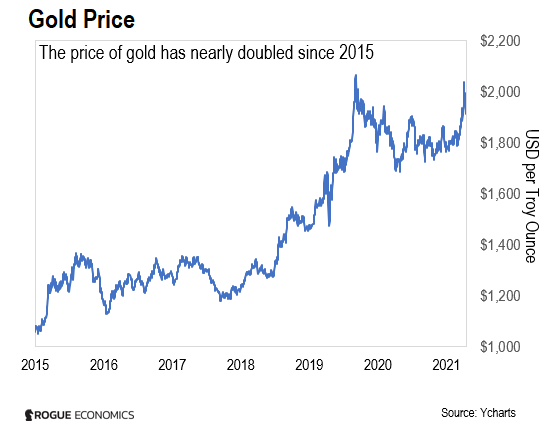 Yet central banks worldwide have continued to add to their gold reserves.

And the Federal Reserve is leading the way. You can see that from this next chart. It shows the top 20 central banks and their gold holdings. 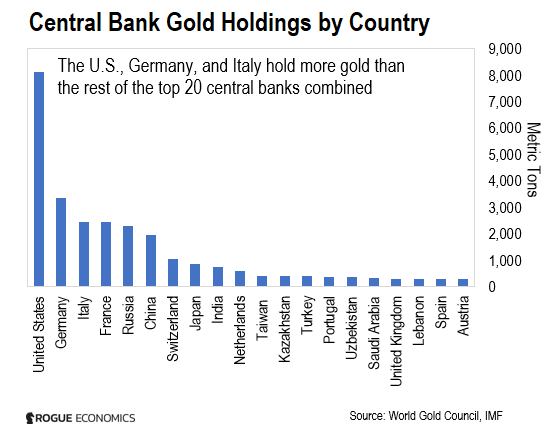 The U.S. has 8,133 metric tons in its gold vaults. That’s more than a quarter of the global central bank total gold holdings.

The Price of Money Fabrication

There’s also another reason why central banks will continue to buy gold, no matter the price.

As I told you previously, governments and central banks around the world are playing a shell game with their currencies.

The four major central banks have created close to $32 trillion in new fiat money since the 2008 financial crisis. That’s the Federal Reserve, the European Central Bank, the Bank of Japan, and the People’s Bank of China.

That kind of irresponsible money fabrication comes at a price: Each unit of currency is worth less and less.

For you, that means the buying power of each dollar in your bank account is decreasing month after month.

As I explained in my recent essay on inflation, it’s only prudent to expect more money creation and price inflation down the line.

This is all part and parcel of the distortion between the markets and the real economy. And it won’t change.

That’s why they will likely continue to ramp up their gold purchases. And this will create additional demand for gold.

Now, I’m not saying fiat currencies will disappear any time soon. But the governments that issue endless amounts of them aren’t set to radically change their policies in the near future, either.

Focus on holding assets in your portfolio that can shield your wealth from the effects of governments’ monetary experiments.

Gold is one such asset.

As I said above, the price of gold has nearly doubled since 2015.

But I believe the biggest gains in gold are still ahead of us.

P.S. Just in case you missed it last week, I wanted to remind you that my urgent briefing all about what I call “The Great Distortion” is now live. It involves a $150 trillion wealth transfer.

This transfer will bring about a complete transformation of America. And a profound change to the financial system as we know it.

And it could transform your wealth, too, if you know where that money is flowing to. To watch my briefing, just go here.