Welcome to Inside Wall Street with Nomi Prins! It’s the only daily newsletter featuring the insights of Nomi Prins and her team of global experts, including regular contributing editors Eoin Treacy and Laurynas Vegys. You’ll find all our issues here. And if you have questions or comments, shoot us a note anytime here or at [email protected].

I hope you’re enjoying your start to 2022. We’re excited about what’s on our radar for you!

Yesterday, Inside Wall Street with Nomi Prins contributing editor Eoin Treacy provided a compelling analysis of the yield curve spread and what it means for you and your money in the year ahead. (Contrary to what a lot of the mainstream media and analysts are forecasting, it isn’t a recession.)

He also underscored an element of today’s marketplace that is critical to our view… and to your portfolio. It can’t be repeated enough.

He wrote, “Bull markets don’t end because they run out of new buyers. They end when the liquidity that is fueling the speculation runs out or becomes much more expensive.”

And right now, we see no end in sight to the speculation… and no increase in the cost of credit on the near-term horizon.

That’s why stocks will continue to rise in 2022.

And so will other assets, such as gold and bitcoin. And yes, as you’ll see, we think you need to own both.

Today, I’m going to talk about why we have such an abundance of money sloshing around the financial system and what it means for you.

Then, in my next email to you on Monday, I’ll show you why bitcoin and gold are two key investments you should have in your portfolio based on this environment.

If you’ve been following me in these pages over the last three weeks, you’ll know I believe there is a growing distortion between markets and the real economy.

And the idea that liquidity drives markets is central to understanding this distortion. The overriding reason for this gap is that money has never been so cheap or attainable for the most powerful players in the global financial system.

And cheap money fuels rallies. That alone has been enough to drive markets upward, even as global economies stumble.

Another thing about cheap money is that it will always flow to the places where it can most easily replicate itself – much like a virus. And, because neither money nor viruses are particularly bothered by borders, its movement is fluid and diverse.

All money needs is the equivalent of a monetary benefactor to keep it streaming along. And it most certainly has that in the world’s central banks – including the Federal Reserve – right now.

With that mind, let’s take a closer look at the Fed’s role in the abundant availability of liquidity today, as well as that of the other three largest central banks – the European Central Bank, the Bank of Japan, and the People’s Bank of China.

Collectively, these four institutions have manufactured approximately $31 trillion worth of money since the 2008 financial crisis, with about $11 trillion of that popping up since the pandemic began.

That fabricated money has effectively been offered in exchange for taking debt out of the market. The common central bank practice of quantitative easing, or QE, entails creating money in exchange for reserve collateral, or usually, government or other higher-quality bonds.

The by-product of QE has been more debt issued in place of what central banks are holding on their books. It’s a big debt shell game, really.

The engineering of such epic sums of money has effectively cheapened the value of money.

It has also resulted in the largest surge of debt, both public and private, in the world since World War II. Due to the pandemic and the deep recession that followed, global debt shot to $226 trillion in 2020, hitting 256% of global GDP (an increase of nearly 30% on 2019). Government debt accounted for more than half of that increase. 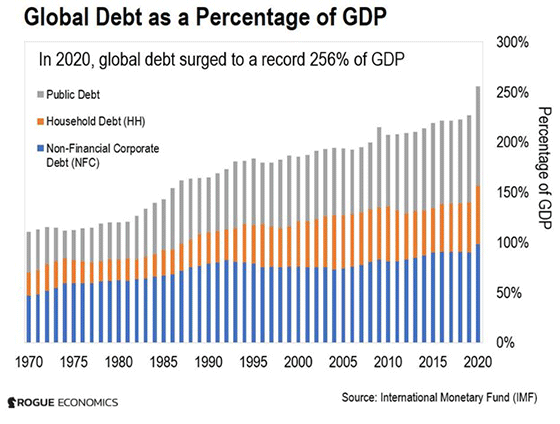 As long as the world is awash in debt, central banks won’t do anything to incite massive debt defaults.

Keep a Close Eye on the Other Central Banks’ Actions

At the end of last year, Federal Reserve chairman Jerome Powell confirmed that there would be a tapering of the Fed’s bond purchases through March 2022. The net response from the market was a big yawn. That’s because there was nothing in what Powell said to indicate that the Fed is actually going to sell any of its assets.

From a pragmatic standpoint, that fact is far more meaningful than the tapering itself.

Besides, just as they did when the Fed tapered in 2014, the European Central Bank and Bank of Japan made it clear to the global financial community and markets that they would extend their ultra-dovish monetary policy actions.

We don’t believe it makes sense to isolate what the Fed does, relative to what other major central banks do. We are always looking at the big picture when seeking opportunities for you.

Why Liquidity Is Here to Stay

No matter what Powell said, or will say in the coming months, the upshot is that the average interest rate on offer to the international financial community will hover around zero percent for the foreseeable future.

Therefore, liquidity is not a problem. The yield curve shows us that, as Eoin pointed out yesterday.

The stock markets know that, too, as evidenced by the record highs achieved in the last month of 2021.

The fact is that none of the central banks are going to sell their assets. That’s why liquidity is here to stay.

That’s also why certain components of the stock market, the cryptocurrency market, and the precious metals market will continue to enjoy a rally in 2022. Investors are using the abundant cheap credit to speculate on all aspects of the market.

What I want to do in the second part of this piece – which you’ll find in your inbox next Monday – is focus on two of those three asset classes: precious metals and cryptocurrencies, more specifically, gold and bitcoin.

Many pundits, billionaires, and analysts have taken sides as to whether gold or bitcoin will endure as the best source of value over the coming years.

Stay tuned for my thoughts on why you need both in your portfolio.