Inflation in the U.S. is at its highest level in 40 years. We see headlines about the 7.9% annual inflation rate on every news outlet.

And more than that, we feel its effects directly any time we go to the grocery store or the gas pump.

But do we understand what inflation really is?

Today, I want to take a moment to discuss some fundamental questions about inflation.

What causes inflation? How is it measured? What’s next?

Knowing the answers to these questions can help us benefit from the permanent distortion between the markets and the real economy I’ve been writing to you about.

But before we jump in, let’s start with a definition: What is inflation?

But the reality is that they are two very different things…

And there’s a reason the government is happy to allow the mix up.

So, when you hear about inflation from some government official or in the mainstream media, they are most likely talking about CPI.

CPI measures changes in the price level of a basket of consumer goods and services.

But there are several problems with the CPI.

First, prices don’t rise in unison. For instance, the prices of big-ticket items – like transportation, college tuition, and housing – tend to rise much faster than other things.

That’s because scarce and desirable goods and services are more prone to increasing prices.

Second, it’s in the government’s interest to understate inflation.

That’s because recognizing the actual effects of inflation would force some politically unpopular budget decisions.

The government would have to shell out a lot more money on Social Security programs. That’s because they are tied to CPI.

And it would be forced to make cuts elsewhere to pay for this.

The government, of course, prefers to do neither.

This alone should make you skeptical about using CPI to get an accurate picture of the rate of inflation… and how it is really affecting your purchasing power.

Using CPI to mean inflation also confuses cause and effect.

Price increases do not cause inflation.

In other words, the local grocery store, the pharmacy, or the housebuilders are not responsible for inflation.

The Correct Definition of Inflation

So what’s the correct way to define and calculate inflation?

And who is responsible for causing it?

Well, if you’ve grown up with the above definition of inflation, it may surprise you to learn that the original – and correct – meaning of inflation is an increase in the money supply.

So it is, in fact, an increase in the money supply that causes prices to increase.

Over the years, however, mainstream economists and Wall Street shills have attempted to redefine inflation to mean an increase in prices.

Even Webster’s Dictionary has changed its definition…

From its founding in 1828, it had always defined inflation as an increase in the money supply.

Then in 2003, it changed the definition to mean a rise in the general price level.

This took the focus off the main culprit for inflation – central banks. They are the entities responsible for the money supply, after all.

This chart may shed some light on why the U.S. government prefers to use CPI when talking about inflation. It shows the annual change in the U.S. money supply. 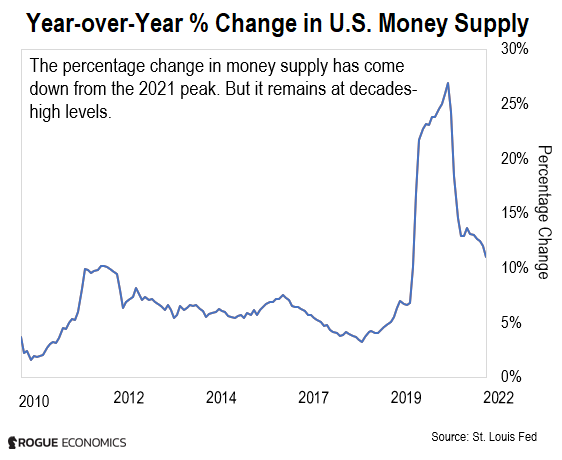 In March 2020, the Covid-19 panic was kicking off. The U.S. stock market was crashing. People were panicking as they watched their portfolios being wiped out.

They turned to the Federal Reserve to do something.

In response, the Fed fired up its printing press.

In 2020, the Fed’s broadest measure of the money supply, called M2, rose by an astonishing $4 trillion. That was a one-year increase of roughly 26% – the largest annual percentage increase since 1943.

For perspective, the annual economic output of all 332 million people in the U.S. is about $23 trillion.

By late summer 2020, the stock market had recovered its losses.

But the U.S. government was stuck in a never-ending cycle of stimulus payments and other measures implemented to support the economic recovery from Covid-19. It had to pay for them somehow.

It’s no wonder the powers that be would rather have you look at the CPI. Compared to 40%, 7.9% doesn’t look so bad.

The amount of money creation and currency debasement they are engaging in is, frankly, shocking.

What Is Coming Next?

If history is any guide, we can expect more inflation – by both measures – down the line.

With President Biden’s gigantic $6 trillion federal budget for fiscal year 2022, the total deficit in 2022 will reach nearly $1.9 trillion. You can see this in the next chart. 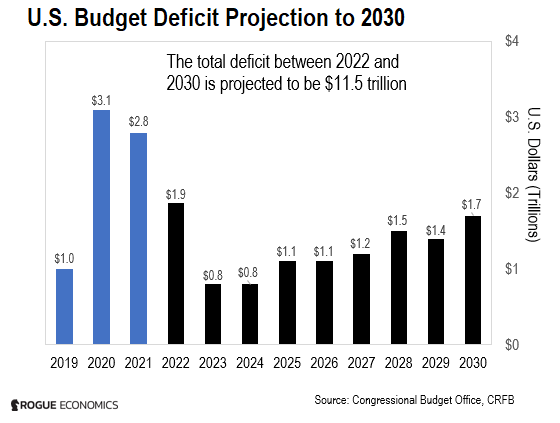 More importantly, the total projected deficit between 2022 and 2030 will be close to $11.5 trillion.

The only entity capable of financing this $11.5 trillion shortfall is the Federal Reserve.

Even according to the government’s official CPI numbers, inflation is hitting multi-year highs. The actual situation is likely much worse.

As I mentioned up top, the latest CPI inflation figure is 7.9%. It hasn’t been this high since 1982.

In the early 1980s, CPI was in the double digits. I wouldn’t be surprised to see it exceed its previous highs as the situation gets further out of control.

With each new dollar the Fed creates, the buying power of each dollar in your bank account decreases.

So, what can you do about it?

You should focus on holding assets in your portfolio that can shield your wealth from the effects of governments’ crazy monetary policies.

Gold and Bitcoin are excellent examples of such assets.

Recently, I showed you why they protect the value of your hard-earned money. I also wrote to you about an important benefit of gold and bitcoin – their hardness… which means that they are hard to produce.

I believe that holding both gold and Bitcoin in your long-term investment portfolio is the pragmatic thing to do.

As for Bitcoin, there are many ways to buy it. One way is to purchase BTC on a crypto exchange such as Coinbase and store it in a crypto wallet.

But if you are buying bitcoin for the first time, PayPal or Block’s (previously called Square) Cash App may be more convenient options. With both of these popular apps, you can start your crypto portfolio with as little as $1.