In the realm of finance, one of the most common disputes is over gold versus bitcoin. 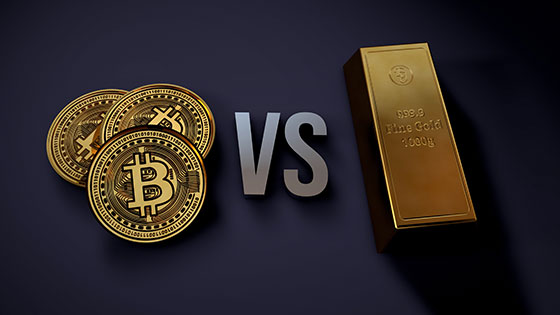 In recent years, scores of pundits, billionaires, and analysts have taken sides on whether gold or bitcoin will be the best store of value over the coming years.

Last summer on CNBC, billionaire investor Ray Dalio said that bitcoin is like a digital version of gold. But he went on to say:

If you put a gun to my head, and you said I can only have one… I would choose gold.

Dalio admits to owning some bitcoin, however, and recently said that a 1%-2% allocation to bitcoin would be right.

Entrepreneur Mark Cuban is a big fan of bitcoin. He is on record as tweeting:

It’s BETTER than gold. No worries about storing it. Easy to transfer. Easy to trade. Easy to convert. Doesn’t require an intermediary. Can be fractionalized.

And he believes it’s the “best SOV [store of value] on the market.”

Why Both Gold and Bitcoin Belong in Your Portfolio

Last Wednesday, I showed you why the global central banks’ seemingly bottomless pit of new money means there’s no end in sight to the rampant speculation we’re seeing in certain markets right now.

It’s a factor of the growing disconnect I see between the markets and the overall economy.

And I promised to show you why you need to make room for both gold and bitcoin in your investment strategy.

The way I see it, gold and bitcoin shouldn’t be seen as competitors dueling it out for position in your portfolio. They have similarities and differences but are fundamentally perfect companions.

Each has different degrees of the following seven key attributes that are necessary to optimize an alternative investment in your portfolio.

The upshot for you as an investor is that when weighing all of these factors collectively, both gold and bitcoin score points as solid additions to your portfolio to help grow your long-term wealth.

Bitcoin and Gold Are Sound Alternatives to Depreciating Fiat Currencies

The debate between gold and bitcoin isn’t going away anytime soon. In the end, time will be the ultimate arbiter.

However, consider how far gold has come, and how solidly it has performed throughout its long existence. Then look at how quickly bitcoin has transformed the financial and the monetary systems in its much shorter existence.

They are both manifestations of their environments – gold of the physical, geological one, and bitcoin of the virtual, technological one.

Here’s why we recommend holding both. For all their differences, they share one critical common theme – they both represent a sound alternative to the fiat currency system. This mutual element is most important in the current global monetary environment.

As I told you in my essay last Wednesday, governments and central banks around the world are playing a shell game with their currencies. They’ve created more than $30 trillion in new fiat money since the 2008 financial crisis. That represents roughly 75% of their total assets.

But that kind of irresponsible money fabrication comes at a price – each unit of currency is worth less and less.

And this won’t change dramatically, even if the fear and uncertainty around the Federal Reserve’s monetary policy creates interim market choppiness.

Now, I’m not saying fiat currencies are going to disappear any time soon. But the governments that issue endless amounts of them aren’t set to radically change their policies any time soon, either.

So holding both gold and bitcoin in your long-term investment portfolio is just the pragmatic thing to do. They both have a crucial role to play in protecting the value of your hard-earned money over time.