The “growth vs. value” talk has been all over the financial news in recent weeks.

If you’ve seen it, you may be wondering whether you own the “right” number of growth vs. value stocks in your portfolio.

But as I wrote yesterday, this one-or-the-other narrative is just noise. When it comes to your long-term wealth, you’re better off ignoring it.

That’s because there isn’t one right choice in the growth vs. value debate. But that’s not the only reason…

This narrative also distracts you from a much more important development happening in the markets right now – one the mainstream media won’t mention.

I’ll show you what I mean today. And I’ll give you a sure-fire way to dim out the growth vs. value debate… and make your portfolio work for you in today’s complex environment.

Murky Line Between Growth and Value

Investors often equate the tech-heavy Nasdaq index to growth stocks, and the Dow Jones Industrials index to value stocks. But as with most things in life, the truth lies somewhere in the middle.

You see, the Nasdaq vs. the Dow comparison doesn’t provide a clear line between growth and value.

The Dow is underweight the tech sector, relative to the Nasdaq 100. And it’s overweight cyclical sectors – such as financial services and industrials. Yet, if we look under the hood, the distinction between the two indexes gets murky.

To put this in perspective, consider the top five holdings in the Nasdaq vs. the Dow.

In the Nasdaq 100, the top five holdings are Apple, Microsoft, Amazon, Meta (formerly Facebook), and Tesla. In the Dow, the five largest holdings, in order of the percentage they take up, are UnitedHealth Group, Goldman Sachs, Home Depot, Microsoft, and McDonald’s.

Right there, we have one company in the top five of both indices – Microsoft. Its price fluctuations will inevitably move both indices.

Going down the list, there are other firms that show up in both the Dow and the Nasdaq, such as Apple and Cisco.

It’s no wonder, then, that the two indices have followed a similar path over the past 30 years. You can see this in the chart below. 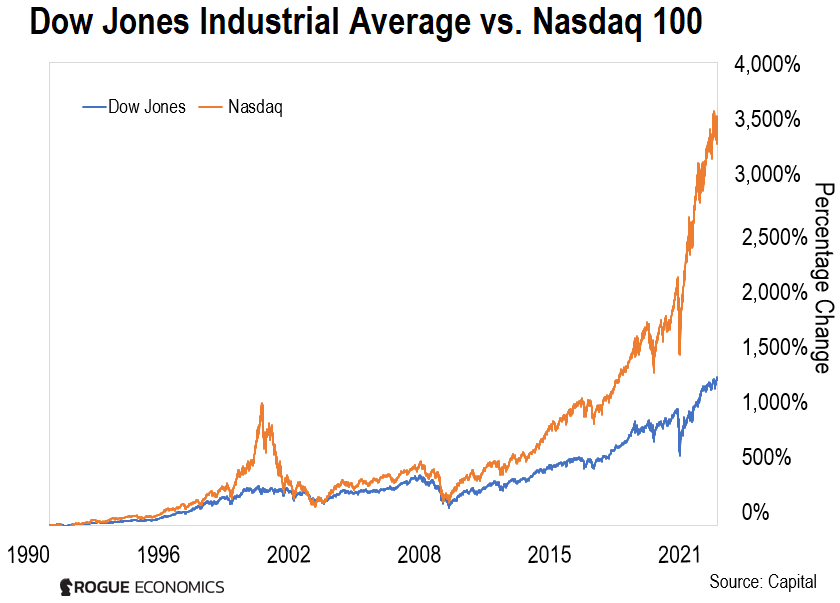 But if our goal is to grow and preserve our long-term wealth, these differences don’t warrant taking a “one or the other” approach in our portfolios.

This Distortion Will Have a Much Bigger Impact on Your Wealth

At the end of the day, the growth vs. value debate is just noise.

What really matters is something the mainstream media won’t tell you about… And yet it could have the biggest impact on your wealth in the coming months and years.

I’m talking about the massive distortion between the market and the real economy.

As regular readers know, we are at the precipice of an epic transformation. It will redefine the path by which money flows, and where it flows. And the only constant is rapid change and choppiness.

That’s against a backdrop of media and analyst interpretations about why markets are doing what they are doing on any given day, week, or month. But as I said above, that’s all noise.

The best way to prepare your portfolio for long-term wealth is by ignoring the noise… and building a growth-value blend instead. Here’s how you can do that…

The Blend Is Your Friend

Both classifications of stocks – growth and value – are susceptible to hype. This hype can become self-fulfilling and create more volatility.

Congressional packages, the Federal Reserve’s actions, inflation data – these can all impact the movement of growth vs. value stocks – for a day, a week, a month, maybe six months.

But here’s the good news. Behind the curtain of the Dow vs. Nasdaq battle, there are companies that contain elements of both growth and value.

Plus, as we saw in the chart above, both indices move more or less together (or converge) during periods of cheap money. And, if you’ve been following these pages, you know that’s exactly the kind of period we’re in today.

That’s why investing in blended growth and value companies is key to optimizing your wealth in these times. This means firms that are best positioned to meet current and future demands.

Grow Your Wealth With Companies That Straddle the Divide

The recent passage of the $1 trillion U.S. infrastructure bill, which I wrote about here, is a good example. It presents some opportunities in areas that straddle the divide between growth and value companies.

Companies that straddle that divide have more reasons to outperform the market when a media narrative is driving volume.

But how do you find the best ones? Here are some guidelines you can follow to start your search. Look for companies that:

Two companies that check those boxes are Microsoft (MSFT) and Cisco (CSCO).

But you can also position yourself with exchange-traded funds (ETFs).

There are funds and indices that present themselves as being in the growth or value camp by virtue of their titles.

Like the Nasdaq and Dow, they also contain overlapping companies. But they are a purer representation of classic growth vs. value… and so they garner investor attention accordingly.

It’s a great way to cover your bases… And to help you dim the rotation noise.