Expectations ran high for the banking sector over the last few days, as banks kicked off earnings season.

And many bank stocks took a beating.

JPMorgan Chase, America’s largest bank, even had its worst post-earnings performance in a decade. Its shares fell 6% on Friday and another 4% yesterday.

In Wall Street terms, a 10% drop is officially “correction territory.” But as I’ll show you below, that drop in bank stocks was an overreaction. And it presents an opportunity for you…

And, as I’ll explore in future dispatches, I believe big banks will see more competition from the new money financial technology (fin-tech) companies in the coming years.

But I do see upside in the traditional banking giants right now, despite the market’s current pessimism.

Today, I’ll show you why you’ll want to pay attention to the traditional banking sector – including some of my former employers on Wall Street.

And I’ll share a way you can set yourself up for profits in your portfolio.

Setting the Tone for the Rest of the Year

During each of these periods, publicly traded corporations disclose information about their financial performance in the last quarter.

Many companies accompany their earnings reports with press releases and media interviews. It’s like a quarterly audition of companies for their investors.

You’ll often see CEOs strut about their positive results… or blame their negative numbers on some external issue, like supply chain problems, pandemics, inflation, or a financial crisis.

The first earnings season of the year is a special one though. It often sets the tone for the rest of the year.

That’s because, during the first earnings season, companies’ reports offer a snapshot of how they did during the last quarter of the past year. They also report on how they did over that entire year.

Plus, they provide markets with what’s called “guidance” for how they expect to do over the new year.

Now, as I mentioned, the markets weren’t too happy with some of the banking sector’s earnings report so far this year.

In a moment, I’ll show you what that means for your money. But first, you need to understand how Wall Street has perfected the earnings game for its own benefit.

In sports, fans develop expectations on how certain teams or athletes will perform during a major game or match. An entire betting business has developed around the odds of victory and what exact scores might be.

In the corporate world, it’s a bit different.

Analysts at large financial companies estimate what the quarterly earnings of other companies will be, before they are announced.

Based on these estimates, an overall average estimate for each company is compiled. When a company announces its earnings, the financial media reports on whether those figures “beat” or “missed” the average estimate.

Not surprisingly, companies tend to “beat” expectations. Why?

Because they’re experts at managing expectations downward. That way they can look better on the day of the big reveal.

Wall Street firms, who also happen to employ many of these analysts, are masters at this game.

Two of my former employers, Goldman Sachs and JPMorgan Chase, beat earnings expectations by a mile in recent earnings seasons.

This came on the back of strong trading revenue and juicy fees from mergers and acquisitions (M&As), initial public offerings (IPOs), and bond issuances.

The nation’s largest bank, JPMorgan Chase, beat earnings six quarters in a row heading into the current earnings season. Its shares rose by 23% during 2021 to reach five-year highs.

You can see this in the chart below. It shows JPMorgan’s share price (orange line) against its quarterly reports (blue bars), going back about three years. 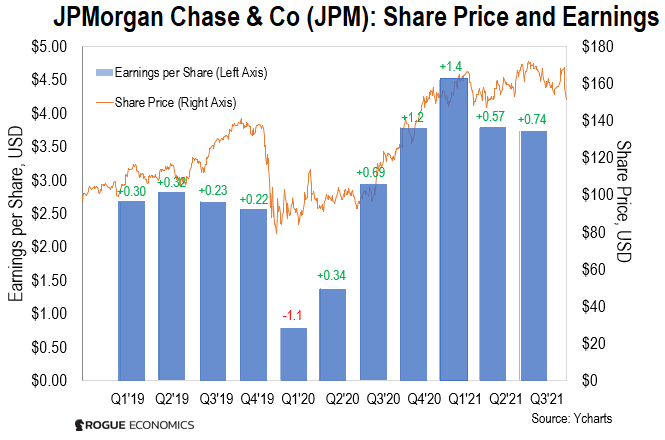 The numbers above the bars represent whether JPMorgan beat – or failed to meet – analyst expectations, and by how much.

This trend is important because it shows how much the share price can fall when earnings aren’t met, or when there are concerns about future expectations based on what earnings were.

It also shows that the stock tends to pop by the next quarter of earnings in those situations.

Citigroup beat estimates every quarter for the past five years.

And Bank of America beat estimates four quarters in a row, and it only missed twice in the last five years.

But for some Wall Street giants, these winning streaks ended this month.

Big Banks Just Had a “Boy Who Cried Wolf” Moment

All three banks reported results that beat expectations again. But in a “boy who cried wolf” situation, the markets treated some of the details behind those results with skepticism.

JPMorgan beat earnings estimates by 32 cents at $3.33 per share. Its trading revenue wasn’t as high as expected during Q4 2021, though. And that pushed down its stock price by 6% on Friday, and another 4% on Tuesday.

As I mentioned up top, it was JPMorgan’s worst post-earnings performance in a decade.

Citigroup’s shares also fell because it didn’t beat expectations by enough. Wells Fargo’s price rose, on the other hand, after it handily beat estimates on both the top and bottom lines.

Goldman Sachs reported results yesterday. And it too missed expectations, which caused its share to be beaten down by nearly 7% yesterday.

Bucking that trend, Bank of America beat earnings expectations when it reported results before the market opened today. Its profits were up 28% last quarter, compared to the final quarter a year ago, though its revenue was lower than estimates.

Morgan Stanley’s earnings this morning also came in slightly above expectations, while its revenue was below them.

That pushed the shares of those two banks up by the most this morning, and it helped the other banks regain some of their losses. However, banks remain in what we consider oversold territory.

That is why, despite the market’s negative reaction to some of these earnings reports, I see higher upside for the big banks ahead. And for you, that means opportunities to profit.

What This Means for Wall Street – and Your Money

Wall Street is thriving due to the record levels in the stock market.

These financial firms participate in the stock market, so they benefit from rising stock prices.

They also broker or manage trading volume on behalf of institutions and retail investors. And with trading volume at record highs, Wall Street banks are having a field day.

You can see this record volume in the table below.

Bank earnings also benefited over the past year from lower loan demand, and cheap credit conditions.

Even with rising rates, the cost of credit for banks remains low, as does the interest banks pay on your deposit and savings accounts.

Regular readers know exactly why this is. It’s something I’ve been writing about here at Inside Wall Street.

You see, the abundance of cheap money from the Federal Reserve and other global central banks has fueled a record year for mergers and acquisitions.

Last year, total global M&A volume jumped by 64% relative to 2020. It hit a record of more than $5.8 trillion. That meant billions of dollars of juicy fees for Wall Street.

And, as I wrote last Wednesday, I see this M&A trend continuing.

Now, overall, I expect fin-tech companies to outperform traditional banks. This is something my team and I will address, in more detail, in future editions of Inside Wall Street.

That said, the market punished the banks too much for their lackluster earnings reports this time.

Interest rate rises are still low. If they rise, that will push money into stocks. And that will translate to profitable trading volume for banks.

Plus, in that scenario, banks will do what banks do. That is, charge more interest on the loans they make.

So how do we take advantage of this?

The best way to gain broad exposure to this old-money, or established, bank group is through the Invesco KBW Bank ETF (KBWB).

Its top holdings include Bank of America, Wells Fargo, JPMorgan Chase, and Citigroup. They were all beaten up pretty badly following earnings results.

This is a “buy the dip” moment… and I don’t expect the window of opportunity to last long.