“Russia has launched a full-scale war in Ukraine”

This is one of the recent headlines in the popular press reporting on the war in Ukraine.

I’ll be the first to admit that the start of the largest military conflict in Europe since the second world war caught me by surprise last Wednesday morning.

And like you, I’m worried for the millions of innocent Ukrainians caught up in this mindless war.

I don’t know what Russian president Vladimir Putin’s endgame is. And I can only speculate on what President Biden is doing behind the news headlines.

How I can help you right now, however, is by talking about something that is critically important, that I’m sure is on your minds: our investments.

Markets do not like uncertainty. But if there’s one thing we’ve got in spades right now, it’s uncertainty. So, it’s a valid concern.

Last week, I wrote to you about how stocks tend to perform in times of conflict. Today, I’ll focus on gold.

If History Is Anything to Go By…

During my first days working on the trading floor of Lehman Brothers, I gained invaluable insights into how markets react during times of crisis.

I learned that the early stages of the onset of geopolitical turbulence tends to cause commodity prices, such as gold, to rise.

For example, in the first two weeks following Iraq’s invasion of Kuwait in 1990, gold rose nearly 9%.

As you can see in the chart below, each time, the fear of war led to gold prices rising.

That’s because investors view hard assets or commodities as safer than paper assets, such as stocks or bonds.

You can see this in the chart below… It includes a detailed breakdown of the key events that occurred in the early stages of the conflict. 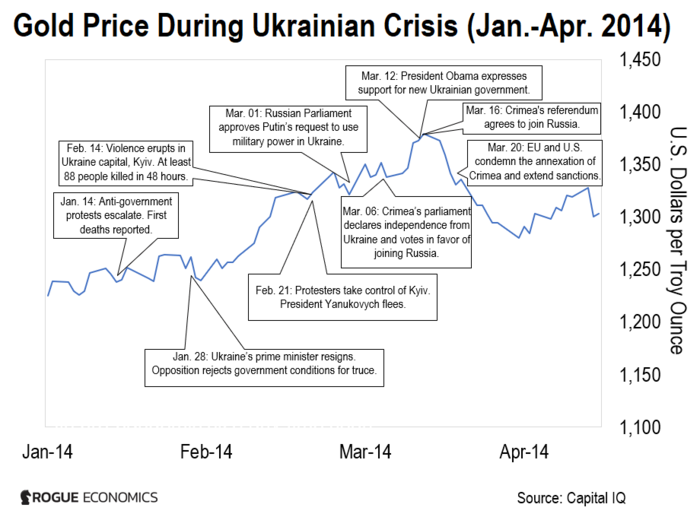 And the same pattern is emerging right now, as this next chart shows…

In early February, Russia’s impending invasion of Ukraine led to a rally in gold. From January 31 to February 22, it went up 6.3%.

Then, as Russian troops began their invasion of Ukraine last week, we saw gold top $1,900 per ounce. Investors feared the markets would get choppy. So they rushed into safety. This sent gold to a near 18-month peak.

Now, while the trajectory of each conflict is different, we believe this rally in gold will likely continue as the conflict develops. Here’s why…

Freezing Russia Out of the Global Financial System

Russia’s invasion of Ukraine is the largest military assault by one European state on another since World War II.

This is something we haven’t seen in many decades. I don’t know what the resolution regarding the situation in Ukraine will be. It will probably get worse before it gets better, however.

And it will have widespread repercussions.

But it’s the financial and economic sanctions – and Russia’s response to them – that will impact our investments, including gold, the most.

In recent days, President Biden expanded sanctions against Russia. The move effectively prohibits Americans from doing any business with Russia’s central bank. And it freezes Russian assets held within the United States.

This came fast on the heels of the U.S. and European allies kicking selected Russian banks off the SWIFT global interbank messaging system.

Almost all Russian banks use SWIFT. Their exclusion from it means they won’t be able to communicate with banks outside their borders.

The West has never imposed such far-reaching sanctions on such a large country.

The SWIFT ban will prevent Russia from moving money easily. But it will also have unintended consequences elsewhere. And these could send gold soaring…

The obvious consequence: Less business for U.S. and European banks. Europe’s banks – especially those in Austria, Italy, and France – are the most exposed to Russia.

Some multinationals, such as Deutsche Bank, cut down on their dealings with the Russians after Putin annexed Crimea in 2014. But others have worked hard to gain more Russian business.

For example, about 11% of Austria’s Raiffeisen Bank’s loans are connected with Russia. And about 30% of its pretax profits are from its activities in Russia.

For weeks, banks with exposure to Russia have been on high alert.

Russia has billions of dollars in debt with banks around the world. Corporate loans make up the bulk of this debt. What happens when Russia’s businesses can’t pay those loans?

Western commercial banks could get hurt. Some of them could even run into liquidity problems. They could become unstable. Or worse… insolvent.

And in today’s globalized financial system, contagion is a real concern.

One “solution” for this problem could be more government spending, money creation, and bailouts to shore up banks’ balance sheets. This would likely spark a rush to safe-haven assets like gold. That would push the gold price even higher.

And further money creation by global governments will just exacerbate the permanent distortion we have today between the markets and the real economy.

This distortion was caused by the immense amount of money already created by the world’s largest central banks, including the U.S. Federal Reserve.

How to Play This Market Disconnect

It is always a good idea to have assets in your portfolio that work well in times of uncertainty. Especially when the value of the fiat money in your wallet is dwindling away by the day due to rising inflation.

Gold has a long, proven track record as a store of wealth. So, whatever happens next in Ukraine, holding gold in your long-term investment portfolio is the pragmatic thing to do.