When I was at Goldman Sachs, senior management spent a lot of time in Washington.

In my division, we had these Monday morning meetings. The running joke was that the manager who called the meetings never showed up. He was always in Washington!

So why did Goldman’s top brass hang out in D.C. so much? Because it was the best way to build relationships with politicians.

Goldman was very effective at lobbying Washington. Top management lobbied for laws that helped Goldman become more powerful. But these laws ultimately piled on more risk to their clients’ portfolios.

In 2002, I left Wall Street. I became an investigative journalist and author. I also hounded legislators in Washington about the rampant corruption on Wall Street.

I tried to get them to see how it could become dangerous to the economy. The 2008 financial crisis proved my point.

But they didn’t listen… because Washington was already in bed with Wall Street.

And that hasn’t changed.

Reader Paul S. called this out in our mailbag recently. He wrote:

Corruption will destroy not only our country but all countries. You seem to be wearing rose-colored glasses!

Everything is being manipulated by the elites. Why don’t you share with us who’s made all the money since this pandemic was fabricated?

I promised Paul I would dig into who made all the money during the pandemic.

To do that, I set out to expose the investing patterns of members of Congress. I uncovered two key trends on Capitol Hill. Both can impact you and your money.

Today and tomorrow, I’ll share with you what I found out…

One reader, like Paul, can make a difference to everyone’s wealth. That’s why I read every email I get from you and your fellow readers.

And what I learned, thanks to Paul’s question, threw up a massive red flag to me. That’s because the investing habits of members of Congress are a result of the permanent distortion.

As regular readers know, I believe the huge volume of cheap money manufactured by central banks has created a distortion between the markets and the real economy.

Having wealth coming into Congress is one thing. But once certain legislators snuggle into a seat of power in the beltway… there’s more time and opportunity for them to grow their wealth via the markets.

This is exactly what happened during and following the pandemic.

In 2021, 113 politicians in Congress disclosed information about their stock transactions. That’s out of 435 voting members of the House of Representatives and 100 Senators.

Those trades covered both lawmakers and their close relatives. In total, they were worth a cool $1.36 billion.

In February 2020, there was a closed Senate meeting to discuss the oncoming pandemic. Several members of the Senate sold stock shortly afterwards… before the stock market crashed on February 20.

At the end of March 2020, the Department of Justice announced an investigation into allegations that several members of Congress sold stocks based on insider information.

If members of Congress used information they learned at the February meeting, they would have violated the Stop Trading on Congressional Knowledge (STOCK) Act of 2012.

No one has ever been charged. But Congress is now considering introducing a ban on its members buying or selling any stocks.

As Senator Mark Kelly (D-AZ), one of the proposers of the bill, said:

This legislation […] will put an end to corrupt insider trading and ensure that leaders in Congress focus on delivering results for their constituents, not their stock portfolios.

Congress Is More Aligned With the Markets Than the People

The fact that politicians are profiting from their investments probably isn’t a surprise to you.

But I took a closer look at who is making the biggest trades and gains. And there are some interesting stories…

Below is a list of the 25 wealthiest members of Congress and the trades they made over the past 12 months.

The table covers both the Senate and the House of Representatives. It spans both Democrats and Republicans. 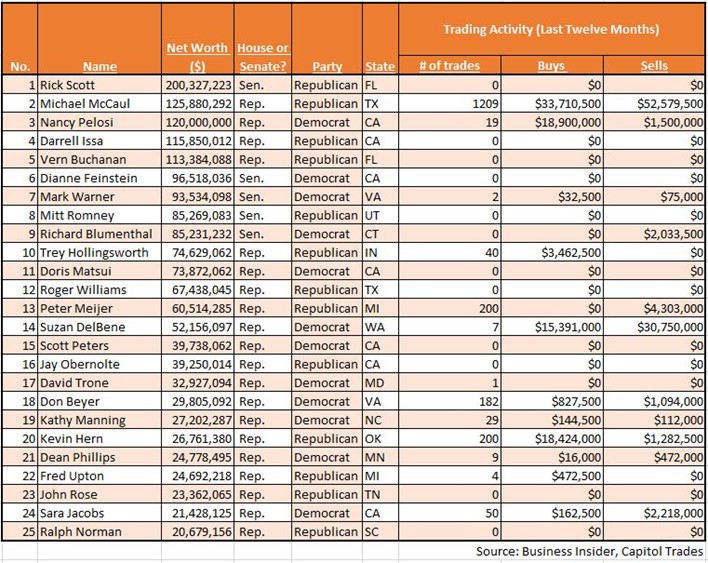 These results confirm what you are probably already thinking: There are some pretty wealthy politicians in D.C.

But the figures above also say something else…

See, these people are elected to act on our behalf. But they can’t help but have a strong allegiance to the corporations they invest in with their own portfolios.

In other words, their rhetoric is all about the people… but their wallets are aligned with the markets.

The more shocking and disturbing point is that these people are in seats of power. They make laws that directly impact certain companies in which they or their family members might potentially have investments.

Take another look at the table above. Representative Michael McCaul (R) from Texas is the second-richest lawmaker in the House and Senate.

The 14th-richest member is Representative Suzan DelBene (D) from Washington. She made just seven trades. But they were huge.

Then, there’s House Speaker Nancy Pelosi and her financial whiz of a husband, Paul. Pelosi is the third-wealthiest member of Congress.

The dynamic duo executed 19 trades. They bought $18.9 million but sold only $1.5 million worth of stock. This tells me the couple is still heavily invested in the market.

It’s safe to say Pelosi has a strong personal interest in what happens to those share prices – and how they impact her family’s portfolio.

Anyone can own those shares, you could say. And you’d be right.

But not everyone makes laws, meets with corporate lobbyists, and decides how taxpayers’ money should be spent.

These people do. Some, like Pelosi, yield more power on Capitol Hill than others.

The good news is we don’t need to sit on the sidelines while these politicians line their own pockets.

We can follow where their money is going… and take advantage of it.

I dug into where exactly Pelosi and other members of Congress are putting their money.

Tomorrow, we’ll dive into the sectors and individual companies at the core of Congress’ investments.

And I’ll show you how you, too, can trade like a politician.