Yesterday, I wrote to you about research my team and I conducted into the trading habits of the members of Congress.

And what we uncovered was eye-opening!

One of the richest members of Congress executed more than 1,200 trades over the last 12 months. That’s nearly five trades a day. And the value of the trades (buy and sell) was more than $85 million.

I also showed you how much some of them hold in stocks and other assets. The richest has a net worth of a whopping $200 million!

The figures are mind-boggling… especially when you consider that these people have busy day jobs we elected them to. I’m honestly not sure how some of them find the time!

And it’s difficult to believe their portfolios don’t influence their decision-making on the Hill. Every week, they are lobbied by people on behalf of companies across all sectors.

For example, I told you yesterday where some of the top management at my ex-employer, Goldman Sachs, spent a lot of their time while I worked there. It wasn’t on Wall Street. It was in Washington!

But right now, I’m more interested in where all that investment money is going…

That’s because the investing habits of members of Congress are a symptom of the permanent distortion between the markets and the real economy.

And that distortion is a direct result of the record volume of cheap money the Federal Reserve – America’s central bank – has pumped into the financial system over the past 15 years.

Congress’ investing trends are another factor in our analysis of where that money comes from and where it flows to.

So today, I’ll show you exactly where members of Congress are investing… and how this knowledge can help you grow your wealth.

Where Congress Members Invest Their Money

Below is a chart showing the total value of stocks members of Congress bought in each sector in 2021. 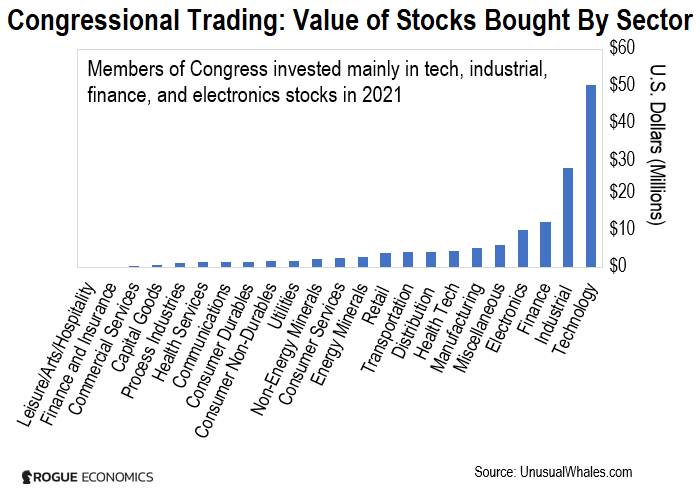 Overall, members of Congress bought $149 million worth of stocks in total last year.

The key thing that stands out is that Congress’ favorite sector is technology.

But interestingly, members of the House of Representatives and the Senate follow two distinctly different investment strategies.

Let’s look first at the House…

Members of the House bought $66.2 million worth of their 10 preferred stocks in 2021. This chart shows the top 10 stocks they invested in… 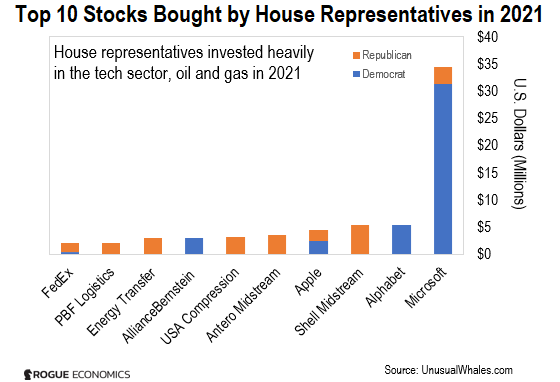 Overall, their favorite sector was technology. Microsoft (MSFT) was the big winner. And the top five contains two other big names in the technology sector, namely Alphabet (Google’s parent company – GOOGL), and Apple (AAPL). Oil and gas stocks were also popular among members of the House.

As you can see from the chart above, Democrats did most of that buying ($43.5 million). And their favorite stock was MSFT. They invested $31.3 million in it last year. That compares with $5.3 million in GOOGL.

House Republicans bought $23.7 million in the top 10 stocks. But they focused mainly on oil and gas stocks.

Over in the Senate, it is a very different story, as you can see from this next chart. 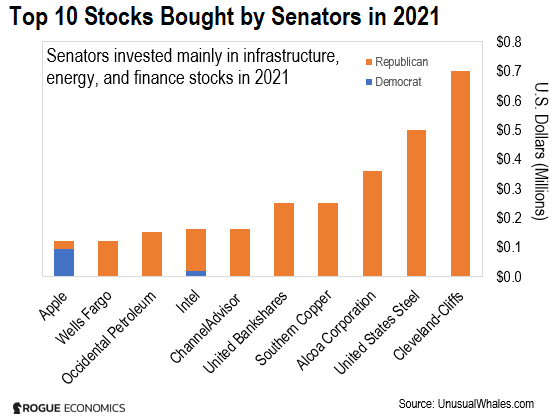 Members of the Senate bought $2.8 million worth of their 10 preferred stocks in 2021. And as you can see, the top 10 stocks they bought were predominantly in the infrastructure sector, followed by the energy, and finance sectors.

Republican senators were responsible for most of the buying in the top 10 stocks last year.

The key trends that stand out from the three charts above are:

Democrats get a lot of money from the tech sector through campaign contributions. In fact, about 98% of political contributions from internet companies during the 2020 presidential election went to Democrats.

It’s no surprise to see that their personal financial interests are closely aligned with the tech sector.

And overall, the tech sector had a great year in 2021. The Technology Select Sector SPDR Fund ETF (XLK) gained 35% for the year.

And in general, when Republicans push infrastructure legislation, it tends to be associated with the building of structures, such as roads, bridges, airports, ports, and railroads.

So it follows that some of the main stocks bought by Republican senators were in companies that we think will benefit from Joe Biden’s more than $1 trillion infrastructure plans.

The distortion I talked about earlier is driving money into real assets, such as materials, metals, and construction. And overall, infrastructure stocks had a great year in 2021. The Global X U.S. Infrastructure Development ETF (PAVE) showed gains of 38% for the year.

And these investment choices align directly with two of our main sectors and investing themes – Transformative Technology and Infrastructure.

So Congress Members are investing their own money in areas that we think have opportunity as well.

Any extra money that flows into these sectors, no matter what the source, could contribute to their positive performance.

So it’s important that you watch how your legislators are investing their own money. It offers a key insight into how they are investing the public’s money. And that can give us a roadmap to profits…

I follow the money. I analyze where it comes from and where it flows to. And right now, our politicians are plowing their money into tech and infrastructure in a big way. So that’s a huge signpost to profits we shouldn’t ignore…

I’ll be following the money and highlighting in these pages where you should put yours over the coming months.

For now, though, if you want to invest in the Transformative Technology sector, I recommend the Technology Select Sector SPDR Fund ETF (XLK).