David has spent over 20 years as a geologist in mining, exploration, and energy development spaces. His global travels and boots-on-the-ground experience make him a trusted voice in metals investing.

He believes certain metals shine after market crashes. So now is the time to increase your exposure – beyond just gold and silver – so you can profit from today’s volatility…

You’ll want to print out today’s essay and keep it close by.

My team and I conducted a deep-dive analysis in International Speculator, my resource investing advisory.

For this, we explored the top metals to own leading up to, during, and after a financial crisis.

I’d like to share our findings with you today. Because it highlights some potential ways for you to profit in your portfolio…

This information is critical right now, as we’re in a market downturn…

This may sound gloomy – because during a bear market or a crash, you need to protect your wealth from big losses.

But there are also opportunities for major profits after a breakdown in the financial system.

And the potential for such gains makes a financial crash a little less frightening… even something to take advantage of.

So how can you protect yourself and set your portfolio up to profit right now?

How We Analyzed Metals Performance

To find out, my team and I looked at how different metals performed in past crises.

We compiled this data for the last four major financial crises (not including the 2020 Covid-19 crash).

We then found all the metals with available historical data: gold, silver, platinum, palladium, copper, zinc, vanadium, tin, nickel, and aluminum. Then, we plotted their average performances during the three “acts” of each crisis.

This showed us three things.

First, it showed which metals did well in the time just before a crisis.

Second, it showed which metals were the best store of value during investor panic.

And third, it showed which metals are best to buy at the depths of a crisis. That’s in order to profit from the recovery that historically takes place the year after a crash.

The Results From Our Study (And How to Profit)

These are unprecedented times… so it’s too early to predict how each of these metals will hold up today.

But by analyzing their performances during past crises, we can get a firm grasp of which commodities to keep our eye on.

The chart below shows the average performance for the 10 metals mentioned above during the last four big crises. 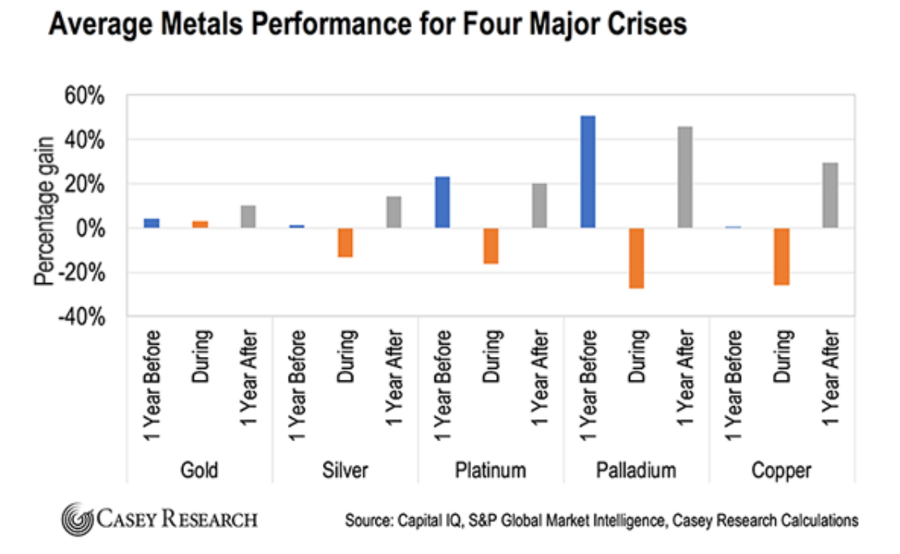 And here are the next five: zinc, vanadium, tin, nickel, and aluminum… 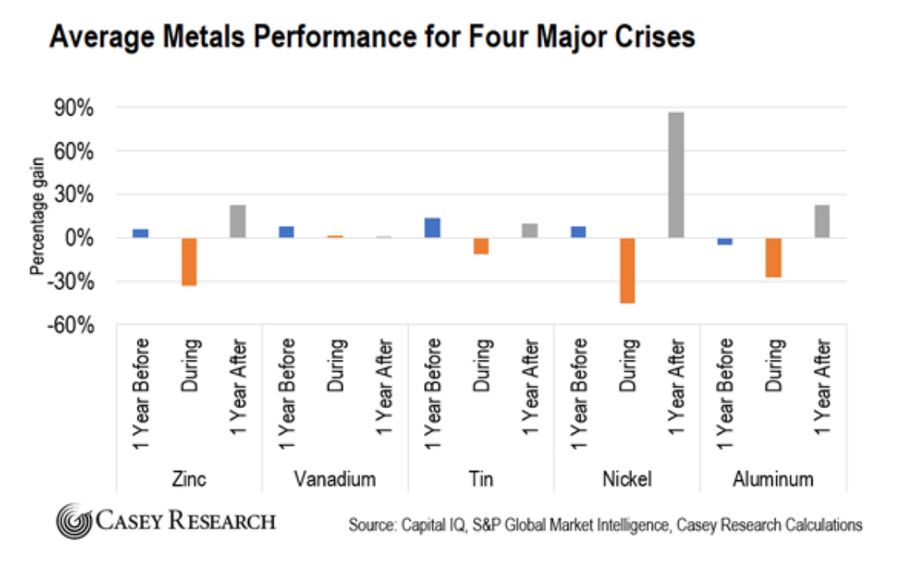 I’ll also provide you with a takeaway for each category.

Tough economic times can hit base metals hard. In the last four crashes, the worst-performing metals have been aluminum, copper, zinc, and nickel.

On average, they fell 25-45% during market panics.

This makes sense, given these metals’ ties to industrial activity. When the economy hits major speed bumps, investors dump these first.

The major base metals deliver slight gains before a crash. But they really shine afterward.

In the year following major crashes, nickel gained an average of 87%. Copper and zinc had average one-year gains of 29% and 22%, respectively.

Investment Takeaway: When markets see a significant correction or crash – like today – be very selective with the major base metals. The best strategy is to buy base metals firms that also hold significant precious metals.

If the markets correct, adding base metals stocks at the bottom to benefit from the immediate rebound is a winning strategy.

Minor Base Metals (Tin and Vanadium)

One of the most interesting findings from our research: Minor base metals held up surprisingly well.

Both tin and vanadium delivered solid gains in the years prior to crises. But unlike the major base metals, tin dropped an average of only 12% during crashes.

That was better than precious metals silver, platinum, and palladium (I’ll get to those in a moment).

Investment Takeaway: The minor base metals are good bets for the current unsteady market. Even as the broad market continues to suffer, these metals retain value.

A major reason they’ve held up well in crashes is that there’s been little speculative trading in the minor metals.

But a point of caution: That’s changed in recent years.

Our research proves that gold is the way to go during uncertain times.

In the last four major financial crises, aside from vanadium, gold was the only metal that increased in value during a crash. It gained an average of 3%.

The yellow metal also delivered gains before and after crashes – rising an average of 4% in the year prior to a crash, and 10% in the year after.

Interestingly, silver did much worse during crashes. Silver fell an average of 13%… and barely showed any gains in the years leading up to these crashes.

Meanwhile, platinum and palladium both did well in the year after a crash, rising 20% and more than 40%, respectively.

Investment Takeaway: Gold is the safest place to be in uncertain times. It holds value well and delivers solid gains.

Silver isn’t as reliable and tends to take a much larger hit during crashes. It rebounds well after the storm clears, so it’s best to wait until a bottom before taking a position.

And while platinum and palladium both suffer during a crisis, they can deliver solid gains on either side of one.