Silver is setting up for explosive gains.

I know, I know… It’s a bold statement to make.

And amid all the headlines covering the market mayhem this year…

From stocks and bonds to energy and crypto…

I can forgive you if you haven’t been paying too much attention to silver.

But you should be.

As we’ve been showing you, silver will play a vital role in the global shift towards New Energy. Its demand and price should explode in the years to come.

However, something recently caught my eye that I believe will bring about a historic silver bull market even sooner. Potentially as soon as 2023.

So today, I’ll shed some light on that, and I’ll show you how to take advantage of this shift.

Silver mining was hit hard during the Covid-19 crisis.

Mining operations shut down… mine developments were suspended… exploration projects were put on ice.

In fact, in Mexico, the world’s largest silver producer, all mines were shuttered during the spring of 2020.

The silver market didn’t have to wait long to experience the negative consequences of these policies.

And earlier this month, the Silver Institute published estimates that the silver market could reach a shortage of 194 million ounces in 2022.

That’s up four times from the prior year, creating the biggest deficit in decades.

This comes as silver demand is projected to reach an eight-year high this year, at over 1.21 billion ounces. That’s up 16% from last year.

Use of silver by industry, for jewelry, and bars and coins for investment are all forecast to reach record levels in 2022.

Now, a deficit is not proof that a commodity will soar. Deficits may not catch up with a given commodity immediately.

But if history is any guide, eventually, they do. And when you take rising demand into account, this is bullish for silver.

Is Silver Still a Bargain?

So silver has held up decently amid the market turbulence of the past year.

Still, at a price of $21.34 per ounce, silver is trading well below its July 2020 price of roughly $27 – before the Fed’s printing press really went into overdrive.

In other words, it’s trading as if no money-creation had happened. That makes it look like a bargain in my book.

It tracks the price of gold in silver terms. Put another way, it tells you how many ounces of silver you can buy with 1 ounce of gold.

So our Gold-to-Silver ratio is at 82. In other words, you need 82 ounces of silver to buy 1 ounce of gold.

This tells me that silver is cheap relative to gold. Let’s look at a chart of the ratio to see why…

The orange line above tracks the Gold-to-Silver ratio. The blue line is the historical average.

One thing jumps out from the chart above. And that is the ratio’s most recent peak. In March 2020 (amid the coronavirus crash), the Gold-to-Silver ratio shot up to 112.

That’s the highest it’s ever been. You needed 112 ounces of silver to buy a single ounce of gold.

I don’t expect silver to return anywhere near those (crazy cheap) levels any time soon. In fact, the ratio has been on a downward trend since September 2022.

But it still sits well above the 54-year average of 57. The current reading is still 44% above that average.

All in all, silver looks like a relative bargain right now. And that brings us to our last question.

Why Hasn’t Silver Broken Out Yet?

It’s an important one. After all, if you own silver, you might buy it for the same reasons you buy gold…

And today, despite the Fed’s best efforts, we’re still living with a level of inflation we haven’t seen in decades.

But silver (much like gold) is also facing headwinds from the U.S. dollar. As I wrote previously, the dollar has remained persistently firm, relative to other currencies.

And, more importantly, silver’s growth (again, much like gold’s) has been hindered by the Fed’s six interest rate hikes so far this year.

You see, rising interest rates are considered a bearish sign for silver.

That’s why its price is prone to move in the opposite direction of interest rates. The chart below shows this inverse correlation. 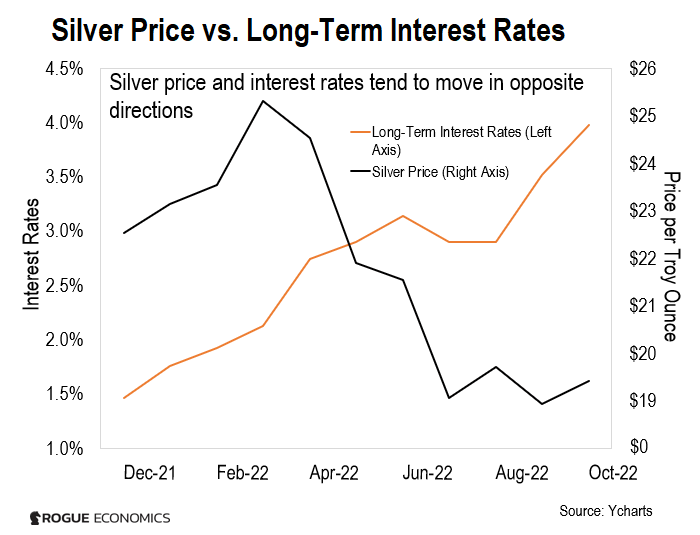 So as interest rates rise, folks will often choose to invest in interest-bearing accounts instead of buying gold or silver.

Now, the Fed’s next interest rate decision will take place on December 14.

That’s when we’ll know if the Fed is staying hawkish through the end of the year… Or if it’s kicking off the three-stage pivot I’ve been writing about.

At last glance, the market is pricing in about 70% odds of just a half-point rate increase.

As for my view, it hasn’t changed. I still believe the Fed will start pivoting this winter.

This, coupled with the U.S. dollar’s gradually waning strength against other major currencies, bodes well for silver going into 2023.

So how do you play this opportunity? In past dispatches, we told you about one of the simplest ways to buy physical metal – coins and bars.

The main drawback of investing in physical silver is that coins and bars are bulky to store.

So, if you’re new to investing in silver, another way to get exposure is through a silver exchange-traded fund (ETF).

A silver ETF invests primarily in hard silver assets, and you can buy it through your brokerage account, like a stock.

We like the Aberdeen Standard Physical Silver Shares ETF (SIVR). The fund stores its metal in London, England, but it’s listed on the New York Stock Exchange.

Now is the time to add some exposure to your portfolio.