When I look at the economy, it’s hard to ignore one thing: A recession is looming.

Inflation is still at decades-high levels.

Yes, the latest Consumer Price Index (CPI) figure of 7.7% did show a slowdown in the pace of inflation. But it’s still high.

I believe it will remain above 6% for the first half of 2023 at least.

This is because rents continue to rise as the housing market slows… And energy and diesel prices are likely to remain high into the winter months.

But despite that, I do see bright spots for investors. And as I’ll show you in today’s essay, one of those bright spots is in gold.

That is, for gold prices vs. the U.S. dollar anyway. The reality is that against nearly every other major currency, gold prices did just fine.

That’s what the chart below shows… 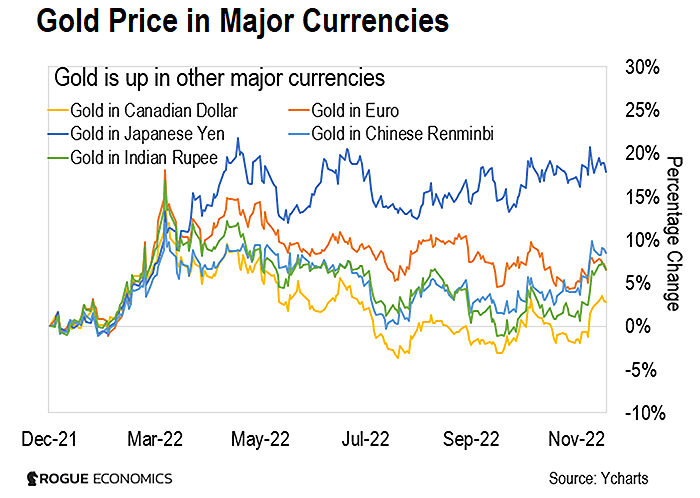 Both contributed to the U.S. dollar’s strength.

So as interest rates rise, folks will often choose to invest in interest-bearing accounts instead of buying gold. Or they’ll place their money in higher dividend-yielding stocks.

But here’s the thing…

Just before gold prices turned south – when the Fed’s rate hike machine kicked into gear with a 25-basis point hike in March – the price of gold was soaring.

At the start of 2022, all the markets were poised to rise. Central banks were fueling them by creating trillions of dollars and keeping rates near zero.

Plus, the pandemic was mostly in the rear-view mirror, and consumers could go out and spend money and move around again.

The last time that had happened was in August 2020, when the world was grappling with the uncertainty of the pandemic.

In response, the Fed cut rates to 0%… and it had nearly doubled the size of its book within five months, to nearly $7 trillion.

Gold’s March 2022 rally was also largely due to safe haven investing. That was driven partly by fears about the ramifications of Russia’s invasion of Ukraine in February.

But it was also due to rising inflation in energy, food, and fertilizer prices that accelerated due to the fallout of that invasion.

Sanctions on Russia placed further strain on the global economy and led to soaring natural gas and other prices. But because of rapidly rising inflation, the Fed was compelled to act. Other central banks followed suit.

A Good Set-Up for Gold

Since March, the Fed has continued its path of aggressively increasing interest rates.

This has had the effect of elevating the U.S. dollar to a two-decade high. Gold prices fell in comparison. So did the stock market and bond market.

You can see this in the chart below… 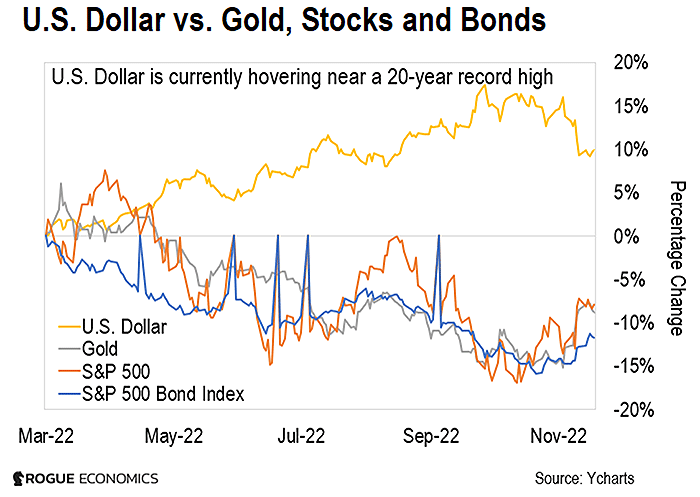 Gold has fallen by about 3% this year vs. the U.S. dollar.

But here’s what the chart above doesn’t show… Gold is actually up around 7%, and it’s up 18% relative to the euro and yen.

Gold has also stood up very well compared to the Transformative Tech and New Money sectors. For instance, Facebook (or Meta) shares have dropped by 65% and Bitcoin by 64% since January 2022.

Now, as regular readers know, I believe the Fed is going to initiate Stage 1 of its pivot as early as next month.

As a refresher, Stage 1 means it will reduce the size of rate hikes. Stage 2 will be a pause in rate hikes. That could happen as early as the middle of next year.

And that presents a good set-up for gold.

See, generally, rising rates and a strong dollar are bad for gold. That’s because gold and other precious metals are mostly traded in dollars.

The stronger the dollar gets, the more expensive it is to buy gold for foreign investors. That weaker foreign demand causes gold prices to drop.

But, if the dollar weakens, even a little – which it would likely do on any stage of the Fed pivot – it could catalyze a boost to the dollar price of gold.

There are four main factors that could boost the price of gold vs. the dollar. And in Monday’s dispatch, we’ll break them down one by one.