Lau has an extensive track record of investing in stocks, cryptocurrencies, and financial derivatives. He specializes in spotting megatrends in sectors like precious metals, mining, and tech.

Today, Lau tells us about one tech trend that will disrupt our lives in more ways than one – and could have massive investment implications…

Countries around the world found themselves scrambling for important medical supplies – face masks, ventilators, personal protective equipment, you name it.

China – normally a big source for these supplies – was busy dealing with its own COVID-19 problems. Hospitals had no way to get these supplies.

In response, local companies and tech-savvy makers rushed in to help in any way they could… And for many, that meant 3D printing.

3D printers went into overdrive. In a matter of weeks, tens of thousands of parts were printed.

In other words, the pandemic crisis highlighted how fragile global supply chains are. And, as industries dealt with these problems, 3D printing stepped in and picked up the slack.

Today, companies and nations alike are still questioning their supply-chain dependence on countries like China.

This will usher in a new era of 3D-printing technology… and potentially disrupt the global trade system forever.

But there are also other ways in which 3D printing will disrupt our daily lives. And for you, that means opportunities to profit. Let me show you what I mean…

Looking back, it was a groundbreaking event.

Just ask a factory today to make you a single hammer to your own design to find out why. In the best of scenarios, you’ll wind up with a bill for thousands of dollars (providing you’re not laughed right out of the door).

That’s because the manufacturers would have to produce a mold, cast the head, turn a wooden handle, and then assemble the parts. This would make for a very expensive hammer.

But if you’re producing thousands of hammers, each one of them would be much cheaper – thanks to economies of scale.

For a 3D printer, however, economies of scale matter much less. You can tweak its software endlessly, to produce just about anything.

I bring this up because it illustrates one area 3D printing is currently disrupting: manufacturing. But it’s certainly not the last.

An Industrial Revolution for the 21st Century

But things are changing. More and more companies are using 3D printing not for prototyping but production. Just think about it…

Why would you need large warehouses if you can print any custom part on demand?

Why would we need a factory in China to make a spare car part when we could 3D-print it in America?

Why would we need to pay shipping and transportation costs for one-off items, when we could 3D-print the item locally?

To me, 3D printing is no less than another Industrial Revolution.

Just like the Industrial Revolution that kicked off in the 18th century, 3D printing will touch on every aspect of our daily lives – not just manufacturing.

As I mentioned up top, 3D printing is also changing the world of medicine – and in more ways than one.

You see, 3D printing technology isn’t just good for medical supplies. It can also be used to make human body parts. And this could play a huge role in improving, and saving, people’s lives.

The Wake Forest Institute for Regenerative Medicine is a case in point. It developed methods for manufacturing human tissue with specialized 3D printers. This involves using human cells as “ink.”

So, while a standard 3D printer may use plastic to create a specific item, a bio-printer will layer cells to form tissues and organs.

Scientists use the patient’s cells to create the 3D-printed body parts so that their bodies won’t reject them.

Tomorrow, they might be able to make a new kidney or heart at the touch of a button.

This is a long shot from early 3D printers, which could only make things out of plastic.

In the early days, 3D printing was also costly, and difficult to access. That started to change around 2010, when technological advances made 3D printers cheaper, putting them within consumer reach.

And 3D-printing technology will become even more compelling in the near future.

I expect 3D printing to get even faster and cheaper over the next couple of years. When this happens, 3D printing will unleash a revolution.

And, as I wrote last week, where there are tech developments, there’s a profit angle.

You may remember the first 3D-printing boom in 2013 and 2014. Shares of 3D-printing companies soared.

Below is a chart of 3D Systems – the company that produced the hammer I mentioned earlier. It’s currently the world’s largest 3D-printing firm. 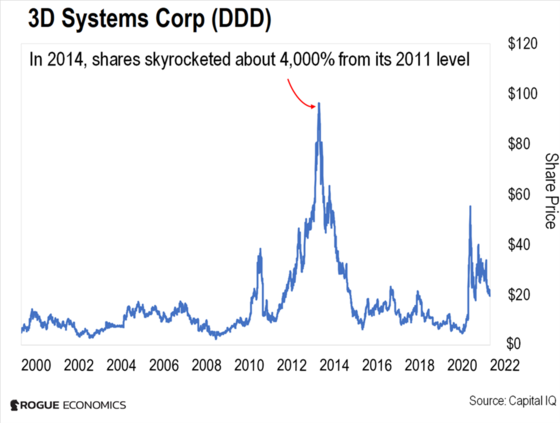 But the boom turned to a bust, as early 3D printers didn’t live up to the hype. Shares in many companies plunged over 80%.

But that didn’t mean 3D printing was dead – far from it. Have a look at this next chart. It shows how much the global 3D-printing market has grown since 2014. 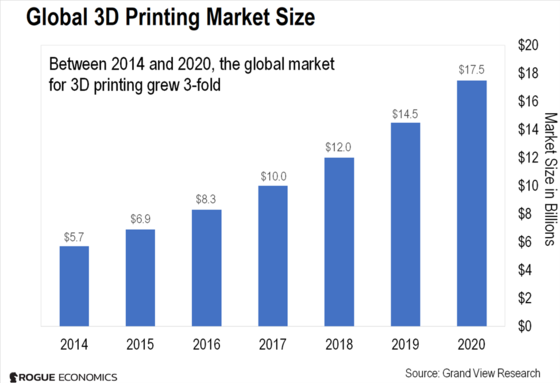 As you can see in the chart, the overall 3D-printing market has more than tripled in value since 2014.

And yet, many 3D-printer stocks are still down 80% from their peaks.

It’s another example of the disconnect our editor, Nomi Prins, has uncovered between the markets and the real economy.

While the 3D-printing market makes remarkable strides, the stock market leaves it for dead. Sooner or later, however, the markets will catch up.

You see, many large businesses and institutions are already using 3D printing to be more efficient. That includes General Electric, Nike, the United Parcel Service (UPS), Audi, and even the U.S. Navy.

More importantly, the growth in the 3D-printing market, which I showed you above, is likely to continue… and accelerate.

The global 3D printing market size could reach $63 billion by 2028, according to market research company Grand View Research. That’s an increase of 3.6x from where we are today.

How to Get In On This Revolutionary Trend

Here’s the bottom line. In 2013-2014, the hype exceeded the technology. Today, as the examples above show, the situation is reversed.

As the 3D-printing megatrend revolutionizes multiple industries, it will create economic value worth trillions of dollars.

It’s only a matter of time before the market catches on again. And when it does, I expect the gains in select 3D-printing stocks to be as explosive as during the last boom.

Unfortunately, you’re unlikely to come across most of these opportunities today – unless you’re willing to put your hard-earned money in small, unestablished 3D-printing plays.

These tend to be volatile. And they usually come with a degree of risk only suitable to those with a taste for the higher-stakes table.

The good news is, there’s another (safer) way to take advantage of this opportunity.

The 3D printing ETF (PRNT) is a no-nonsense 3D-printing investment you can access with a brokerage account.

PRNT has about $394 million of assets under management. And it has 54 stock holdings, including HP (HPQ) – the leading IT company in the U.S. – and 3D-printer manufacturer Desktop Metal (DM).

The fund gives you an easy way to bet on a basket of companies involved in 3D printing.