By the time the markets closed last Tuesday, the S&P 500 had logged in its worst-ever start to a year ever.

Meanwhile, last Monday, we saw the third largest intraday reversal for the S&P 500 ever.

At one point, the Nasdaq lost almost 5% for the day, and the Dow Jones shed 1,100 points. By the close, they were both in the green.

The week before, the opposite happened: afternoon losses wiped out morning gains.

Those sorts of market see-saws are a major symptom of the distorted times in which we live. They can cause major stomach-churning.

That’s why staying disciplined… and not selling your investments the second the markets get wild… is a great way to grow your portfolio.

Today, I’ll show you where that chop is coming from, and what you can do about it.

Step Back and Look at the Bigger Picture

As I mentioned above, there are five top reasons for the volatility we’re seeing today. But those reasons are overblown.

I’ll show you what I mean in a moment. But first, listen, I know what you’re going through.

I’ve worked in investment banking on the inside and the outside. And I was there during some very volatile periods.

The Asian crisis… the Long-Term Capital Management Crisis… the Financial Crisis of 2008… and the Pandemic Crisis. I’ve seen them all.

Here’s what I learned…

When there’s volatility, you need conviction in your strategy. And you need to step back and consider the bigger picture.

So, what is that bigger picture today?

Take a look at the chart below. It shows the VIX, or Volatility Index. 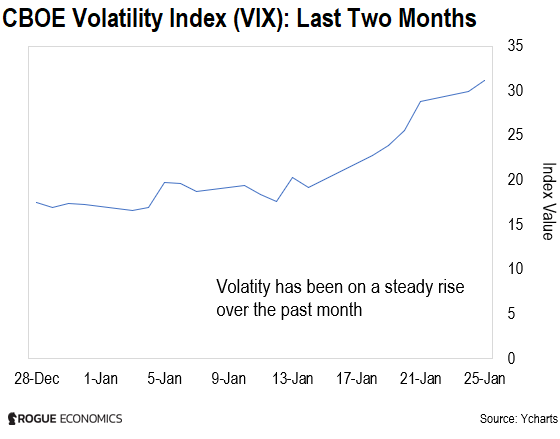 The VIX reflects the market’s volatility. And for the past month, it has been zooming up.

As you can see above, it’s back to early December numbers. That seems like a big jump… But only if you look at two months of its more recent behavior.

If we zoom out, it’s a different story. That’s what our next chart below shows. 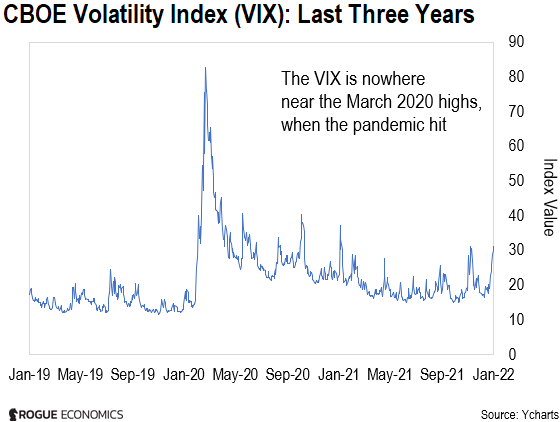 Take a look at the VIX’s recent behavior again. But this time, compare it to its behavior during the start of the pandemic, in March 2020.

You can see that it’s nowhere near as erratic today as it was back then.

Now, what does that mean in the context of last week’s 1,100-point swing in the Dow?

It was certainly stomach-churning for many people. And these sorts of swings happen in the markets from time to time. But as the bigger picture shows us, this is not the norm.

During these moments of extreme chop, the old 1939 wartime slogan comes in handy.

“Keep Calm and Carry On.”

It helps to remember that during turbulent market conditions. Still, you’re probably wondering: why the wild price swings right now?

Five Fears Spurring on the Volatility

There are five main fears that are spurring on this volatility in the markets. Let’s look at what these fears are – and what the market is missing about them.

Fear No. 1: In December, the Federal Reserve said it would raise interest rates and cut its nearly $9 trillion balance sheet.

What the market is missing: This caused near-panic in the markets. But on Wednesday, Fed Chairman Jerome Powell spoke again.

Remember, Powell has millions of dollars of his own money invested in the markets. So do members of Congress.

Powell talks a lot about helping the broader economy and regular people. But he’s also human. And he’s no more a fan of portfolio losses than you are.

Fear No. 2: Earnings haven’t blown expectations out of the market.

What the market is missing: As I wrote recently, companies tend to set low earnings expectations. That’s so they can beat expectations when earnings season starts.

Wall Street banks do this, but they’re not the only ones. Other companies on the S&P 500 do it, too.

It’s just that this year, earnings haven’t beaten expectations by as much as in the past. This took the shine off many of the names that reported quarterly results this month.

Earnings season kicked off two weeks ago. You wouldn’t know it from the overall market behavior… But around 77% of the companies that reported results so far have beaten analysts’ expectations. (Although not by as much as usual, due to inflation and supply-chain issues.)

Now, there are exceptions, such as General Electric and Netflix. They both missed expectations on various metrics… And their share price took a nosedive.

But this doesn’t worry me. In fact, it’s normal. Market volatility tends to follow the glass half empty mentality as a first reaction. After that, it normally wanes.

What the market is missing: This same exact issue has made headlines before. We saw it in 2014, when Russia invaded the Crimean Peninsula in Ukraine. It rattled the markets, but then they shrugged it off.

Markets don’t care about geopolitics for very long. They care about money.

What the market is missing: World trade is growing, and supply chains are slowly coming back.

World trade took a hit for much of 2021. But in November, the United Nations published a more optimistic report. World trade hit a new high between July and September, the report said. And it was on track to grow by 23% in 2021, compared to 2020.

Now, supply chain disruptions do inflate prices. And, even though we will still see effects of those disruptions, things are getting better. The fact that more trade is taking place means that at least some supply chain issues are easing up.

According to inflation forecasts, we could see overall inflation go down by as early as the second half of 2022. Certain sectors and commodities will probably still feel the effects of inflation, no matter what the Fed does. But overall, we won’t see the same kind of sensational inflation we saw over the past year.

What the market is missing: We’ve seen 10 corrections since 2008. After each one, the market resumed its upward trend. You can see this in the chart below.

Remember, as I’ve shown you in these pages before, the market is floating on trillions of dollars of central bank liquidity.

There’s no way the Fed is going to cut off its flow of cheap money for good. Because of that, in the long run, the only way the market can go is up.

How to Keep Calm and Carry On

So, there you have it. The five main fears spooking the markets.

I do expect this choppiness to continue. The five factors above aren’t going away any time soon. But I urge you to keep calm and carry on.

How? Well, one way is to turn this turbulence into an opportunity. For that, remember these two insights I shared with you in recent essays….

These can come in handy if you’re looking to take advantage of the selling, and buy stocks when they’re beaten down:

Follow these tips, and you’ll be in good shape to protect yourself from the negative effects of the market’s distortion.