Yesterday, I wrote to you about a metal that will play a big role in the growth of the electric vehicle (EV) market – lithium.

It’s a metal that has grown in prominence because of the Great Distortion between money flowing to markets instead of the real economy.

What happened is that the real economy was transforming in the areas of New Energy, Infrastructure, Transformative Technology, Meta-Reality, and New Money.

Yet, Wall Street was using the trillions of dollars the Fed fabricated to bet on financial assets, rather than physical assets, or activities such as mining.

Now, that practice has shifted to invest in such assets… and metals like lithium.

Today, I’m going to tell you about another metal that has grown in prominence because of The Great Distortion.

And it’s one that is squarely on Elon Musk’s radar. He’s even called it Tesla’s “biggest concern.”

I’ll get to that in just a moment…

But first, I want to quickly mention a special briefing I’m holding on Wednesday, June 15 at 8 p.m. ET.

It’s about an event that’s coming up in August… one that I believe will trigger a $4 trillion market shock… and kick off the next chapter of The Great Distortion.

I want to make sure you’re on the right side of it. So I’m going to reveal all the details of a special strategy I’ve been working on for the last two years.

It’s a way to level the playing field for regular investors in these distorted times.

Using my special strategy, you can benefit alongside the people usually at the top of the financial food chain – those who control the money.

To be among the first to reserve your spot at my urgent investment briefing, just click here. I’d love to see as many Inside Wall Street readers as possible there.

Now, back to today’s essay…

Musk Is Concerned About Sourcing This Battery Metal

The second metal I want to talk to you about is nickel. It’s another metal that’s set to soar as the EV megatrend takes off.

As I mentioned yesterday, nickel accounts for almost one-third of the cost of the metal used in EV batteries.

That’s because nickel makes batteries more energy-dense, allowing them to go longer on a single charge.

Currently, about 9% of new vehicles sold in the world’s major markets are electric. But Bloomberg estimates that by 2030, that figure will rise to about 50%.

To make this transition a reality, the world will need a lot of nickel.

Right now, we use about 2.4 million metric tons of nickel a year. It’s used extensively in steel making, coatings and, of course, EV batteries.

But the New Energy transition and EV megatrend are poised to increase demand for nickel dramatically.

Back in 2020, Tesla CEO Elon Musk pleaded with mining industry CEOs to mine more nickel:

Tesla will give you a giant contract for a long period of time if you mine nickel efficiently and in an environmentally sensitive way.

And in February last year, he tweeted:

Nickel is our biggest concern for scaling lithium-ion cell production.

And it’s not just Tesla looking for nickel. Management consulting firm McKinsey and Company projects that nickel demand could jump by as much as 66% by 2030.

That should push nickel prices higher.

Supply in a Precarious Position

On top of that, right now, nickel supplies are under threat…

You see, Russia plays an important role in the global nickel market. It supplies about 20% of the world’s Class 1 (99.8% pure) nickel.

We’ve already seen how this could potentially play out…

On March 8, Russian president Vladimir Putin announced a ban on the export of unspecified raw materials and commodities.

Although it wasn’t specifically mentioned, the price of nickel spiked to over $100,000 per metric ton. It delivered a 200% gain in just one day, which was unprecedented. You can see the huge spike in the chart below… 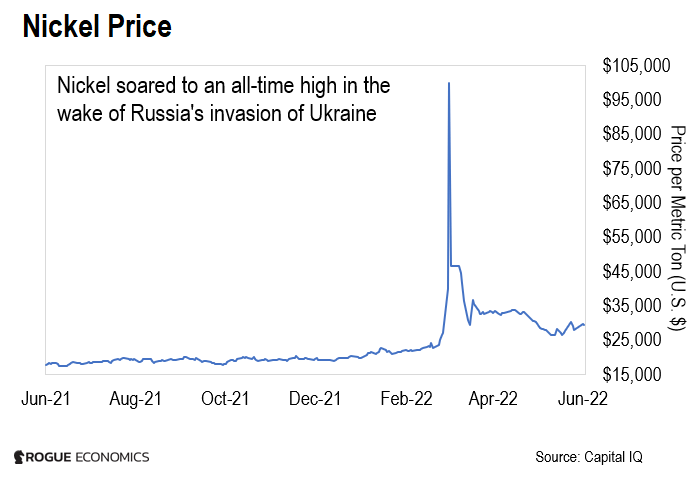 But as a result of this sudden price action, the London Metal Exchange (LME) ended up suspending trading in the commodity for more than a week.

The LME is the world center for the trading of industrial metals. It’s where the majority of all non-ferrous metal business happens. It handles all nickel trading.

The nickel price has since retreated. It’s currently trading around $29,500 per metric ton.

But even without an export ban, Russian nickel miners have faced transport and other problems after the West turned up the heat on Russia.

Now, on the other side, neither the U.S. nor the EU have blocked nickel imports… yet.

But with no sign of Russia calling off its war in Ukraine, it’s a distinct possibility.

And the nickel price reflects that…

Despite pulling back and leveling off over the past few months, nickel is still up nearly 60% year on year.

And the first whiff of suspicion that sanctions may choke off Russia’s exports could send the price soaring once again.

No Easy Solution in Sight

“Well, why don’t they just build more nickel mines?” you might be wondering.

Unfortunately, it’s not that easy. It takes decades to build a world-class nickel mine. And they are notoriously expensive to operate.

Most nickel deposits contain a lot of by-product iron.

That’s a problem for EV battery manufacturers who need very pure nickel metal. And the process to remove the iron impurities is expensive and environmentally unfriendly.

That makes it difficult and uneconomical for miners to finance and permit these mines. Which means fewer mines are getting built.

Now, Russia’s main nickel miner, Norilsk Nickel, has a crucial advantage over most other nickel mines. That’s because the nickel it mines exists at its mine alongside platinum, palladium, and other metals. This makes it easier (and cheaper) to mine as they dig for the precious metals.

But even if prices rise high enough to encourage the necessary mine development outside Russia, it will still take years for those mines to come online.

That’s why Tesla has been scouring the globe for the metal, signing pacts with several nickel suppliers.

In January, it bought into the Tamarack nickel mine development in Minnesota, which expects to begin production in 2025.

This is Tesla’s first U.S. nickel supply deal. It also has deals with BHP, a mining company in Australia, and Prony Resources in New Caledonia, in the southwestern Pacific Ocean.

If companies like Tesla are proactively looking to do deals with nickel miners, it just goes to show how serious the nickel supply situation is.

What This Means For Your Money

These are the reasons I’m so optimistic about nickel… and the companies that mine it.

In fact, we have a classic bull scenario unfolding. Demand is increasing, due to the growing EV trend. But supply is unlikely to be able to keep pace.

This is a direct result of the Great Distortion I’ve been telling you about – not enough money was used to source raw materials, or for domestic production and manufacturing.

We are seeing this play out in supply chain disruptions that are taking too long to adjust. This is pushing up prices for ordinary people.

And as I mentioned yesterday, the White House now wants to play catch-up – because it wasn’t doing enough for the real economy as the Great Distortion was growing.

As I mentioned above, there’s an event that is guaranteed to happen in August. And I believe it will trigger a $4 trillion market shock. It could send some stocks soaring… while others fall to new lows.

The good news is, the strategy I mentioned up top can help level the playing field in your favor. With it, you could make up to 10x your money in less than a month, even if stocks are crashing.

For details on how we’ll do this, be sure to join me at my urgent online strategy session on Wednesday, June 15 at 8 p.m. ET. To reserve your spot, simply click here.

I hope to see you there.

In the meantime, there is a way you can position yourself for rising nickel prices today.

Consider the iPath Series B Bloomberg Nickel Subindex Total Return ETN (JJN). JJN is the only pure-play available to get exposure to nickel prices.

JJN is not an ETF, however. It’s an exchange-traded note (ETN) that tracks one nickel futures contract at a time.

Although it only has roughly $45 million in assets, it is the easiest direct way for U.S. investors to buy into nickel. Purchasing futures directly is more complicated.

P.S. To thank you for attending my strategy session on June 15, I’ll even give away the name of a recommendation that I believe could double your money. So be sure to save your spot here, and I’ll see you next Wednesday.