Our world is experiencing a massive shift.

I got an inside view of this shift last month, when I spoke at the Vancouver Resource Investment Conference.

It’s one of the largest natural resource conferences in the world.

While I was there, I met with miners, geologists, asset managers, and precious metals and raw materials specialists.

There was a lot of interest in the standard metals – gold, silver, and copper.

But there was another metal that got a lot of attention as well. In fact, it was one of the hottest metals in the room behind the usual three.

It’s a metal that packs a broad punch. And it’s the premier ingredient in one of the top trends on my radar: the electric vehicle (EV) revolution.

So today, I’ll show you why I believe demand for this metal is set to soar… and how you can position yourself to profit as it does…

A Key Ingredient in the Electric Vehicle Revolution

The metal I’m talking about is lithium.

Lithium is a soft, silvery-white metal. It’s the least-dense and lightest metal.

Today, 74% of lithium is used in batteries. Rechargeable batteries made from lithium are lighter than other kinds of batteries. That’s why they are so popular for EVs.

And with huge growth predicted in the EV market, which I’ll tell you about shortly, it’s no wonder lithium has become one of Wall Street’s favorite materials.

And the driver for Wall Street’s interest is the EV revolution I mentioned up top.

See, the demand for electric vehicles is about to rocket. 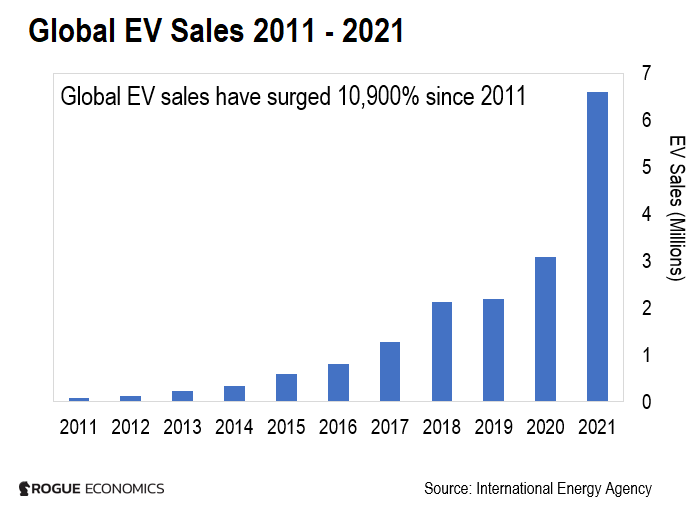 All told, the number of EVs on the road across the world will go from 16 million today to 300 million by 2030.

And this means demand for the metals used in EV batteries will soar.

This next chart shows a breakdown of the various metals that are used in EV batteries, by cost. As you can see, lithium makes up 40% of the cost. Nickel accounts for 30%, and cobalt accounts for 20%. 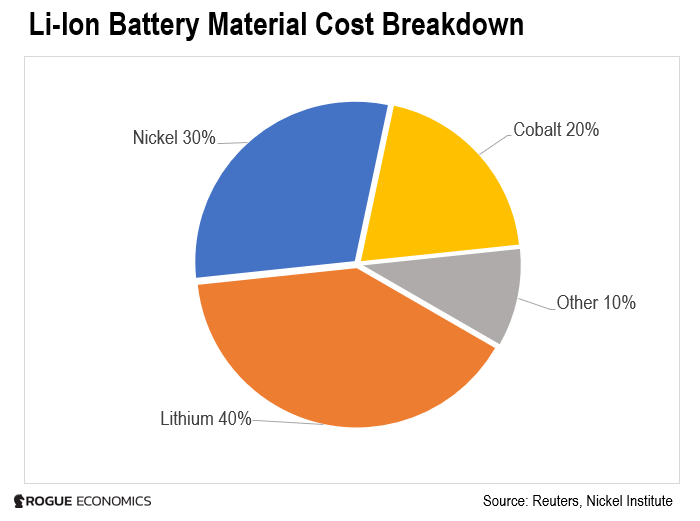 Because lithium is the most efficient and lightest metal for EV battery production, the EV market accounts for about 80% of lithium-ion battery demand.

Demand for lithium has already been growing steadily in recent years, as you can see in this next chart. 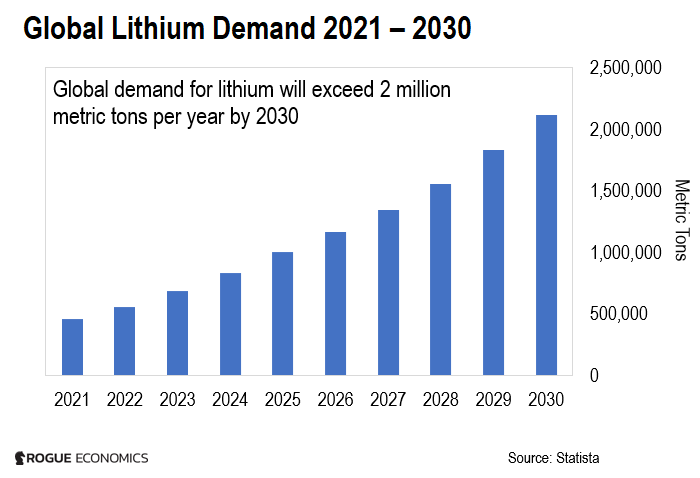 And with EV sales taking off, global demand for lithium is set to quadruple to more than 2 million metric tons per year by 2030. 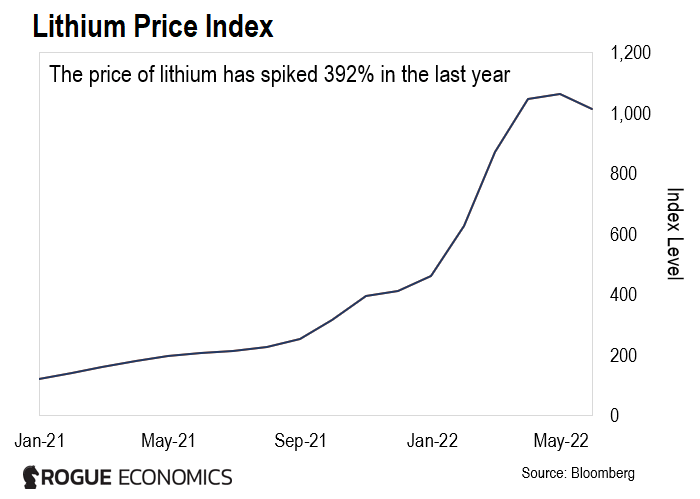 This all bodes well for the lithium-mining industry…

But amid soaring demand and prices, there are concerns about supply. 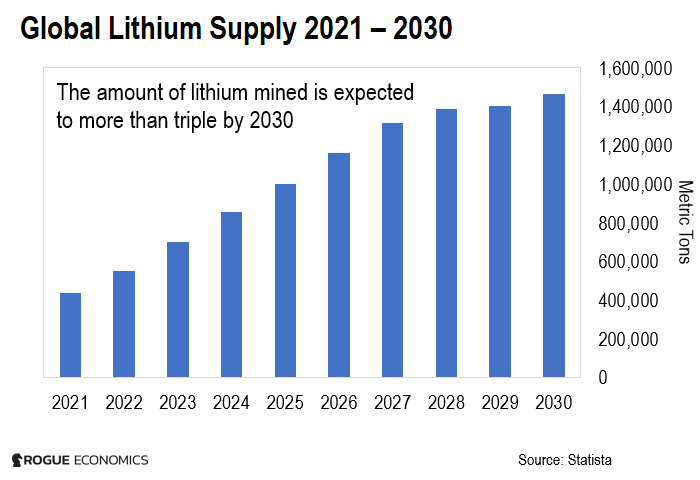 But that’s not enough to meet the 2 million metric tons of annual demand projected by 2030.

This shortfall in global supply and increasing demand will keep lithium prices high.

But that’s not the only reason why I’m so bullish on lithium… and the companies that mine it.

Lithium is also attracting attention and support from a massive player – the U.S. government.

America Fighting to Regain Its Position

Prior to the 1990s, the U.S. was the leader in lithium production. But it ceded this dominance, mainly due to mining costs. Today, less than 2% of the world’s supply of lithium is produced in the U.S.

Right now, the biggest producers of lithium are Australia, Chile, China, and Argentina.

However, that could be about to change… Because the U.S. government is fighting to regain its position in the lithium market.

As I told you last month, on March 31, 2022, President Biden invoked the Defense Production Act (DPA) of 1950 to bolster domestic production of the raw materials used to manufacture electric vehicle (EV) batteries. This was in response to rising energy prices and geopolitical tensions.

The goal is to make America less dependent on other countries for the strategic minerals we need to power EV batteries, including lithium.

Biden believes it’s “essential to our national security,” and to the “development and preservation of domestic critical infrastructure.”

Also, the U.S. government is allocating $3 billion in the Bipartisan Infrastructure Law to boost domestic battery manufacturing and supply chains.

This will fund refining and production plants for battery materials, battery cell and pack manufacturing facilities, and recycling facilities.

Now, as with all government projects, there will be a ton of red tape. But history shows that when Washington allocates more money to a sector, big players on Wall Street direct their investments accordingly.

That’s what has led to the Great Distortion between the financial markets and the real economy I’ve been telling you about.

And it’s the basis for the profit opportunities I see in my five key distortion themes – New Energy, Infrastructure, Transformative Technology, Meta-Reality, and New Money.

Because here at Inside Wall Street, my goal is to follow the money and provide you with simple ways to profit on those money flows…

How to Play It

To position yourself to benefit from the growing demand for lithium worldwide, you can consider investing in the Global X Lithium & Battery Tech ETF (LIT).

The fund invests in the full lithium cycle, from mining and refining the metal, through battery production. So, it gives you broad exposure to this fast-growing industry.

And keep an eye on your inbox tomorrow…

I’ll show you another key metal that’s set to benefit from the New Energy transition and the growth of the EV market worldwide. But its supply may be under threat… which means opportunity for savvy investors.

P.S. The next chapter of the Great Distortion is about to begin… And it could trigger a $4 trillion market shock. When wealth shifts like this have taken place before, the financial and political elites have been the ones to profit. And that’s hardly surprising… seeing as they’re the ones deciding where the money goes.

But for the last couple years, I’ve been working on a new strategy to help level the playing field. With it, you could make up to 10x your money in less than a month, even if stocks are crashing.

I’ll reveal all the details at a special online strategy session on Wednesday, June 15 at 8 p.m. ET. To reserve your spot, just click here.