The term has recently caught on to explain the out-of-control prices U.S. consumers are facing.

We all know that inflation has rocketed this year. We’re paying, on average, 8.5% more for our purchases this year than we paid a year ago.

This has taken a harsh toll on all our budgets. And America’s middle class, the economic backbone of this nation, is cracking under pressure.

As many as 75% of middle-class households recently reported that their income is lower than the cost of living.

It’s gotten to a point where some 20 million homes across the country – about 1 in 6 American homes – are falling behind on their utility bills.

Now, trade disruptions and increased costs along the supply chain are significant factors in rising prices.

But the greedflation argument maintains corporate greed and price-gouging are also to blame.

See, while regular people struggle to make ends meet, many large corporations have been raking in record earnings.

So today, I’ll explore this argument in greater detail. I’ll also show you some ways you can level the playing field.

Let’s start with a quick recap…

As I’ve previously explained in these pages, the original – and correct – meaning of inflation is an increase in the supply of money.

In other words, it is, in fact, an increase in the money supply that causes prices to increase. That’s because there’s more money chasing the same number of goods.

Fast forward to 2022, and the inflation chickens have come home to roost… aided by global supply chain disruptions and sky-high energy prices.

Now, there are always people (and businesses) out there who will use the excuse of inflation to hike prices. That’s just the reality. It’s commonly called “price-gouging.”

That happened even though its net revenue for the first quarter was 24% higher than for the same quarter in 2021. But its costs haven’t been badly impacted by supply chain issues or inflation. In fact, its operating margin was nearly 60% and its net income was up more than 44%.

And its own Mastercard SpendingPulse report published in May showed total retail sales up 7.2% on the previous year. In-store sales were up 10.2%. And online sales were up 92% on pre-pandemic levels.

On the one side, you have Republicans pinning the blame on the Biden administration. On the other, Democrats are complaining about price-gouging corporations.

Whichever side of the argument you come down on, there’s one glaringly obvious factor that continues to give it life – astronomical CEO pay.

The Pay Gap Is Widening

Earlier this year, I showed you how much CEOs make compared to the average American worker. They’re earning 351 times more per year.

Put another way, you’d have to work almost every day in the year to earn what a CEO earns in one day.

Take another look at this chart I showed you back then. You can even see a sharp uptick in their total compensation in 2020, when millions of Americans lost their jobs… and worse. 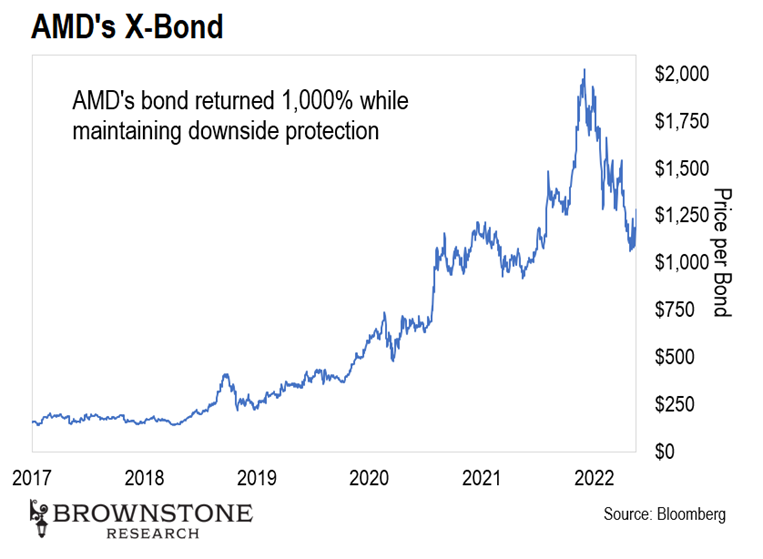 But it’s been getting worse…

So why do bosses’ keep earning more while their workers struggle?

Why Is This Happening?

I alluded to the reason earlier… and it’s a simple one, really.

Corporate profits are at an all-time high. Have a look at this next chart… 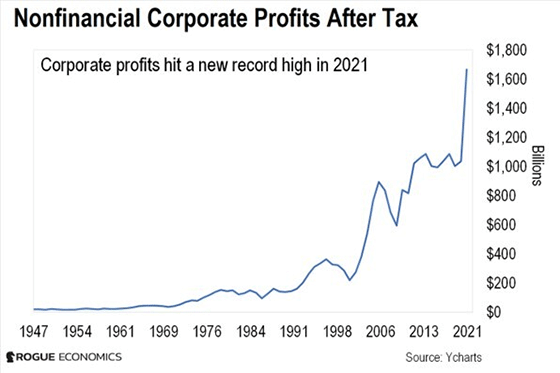 And CEOs are being rewarded generously.

For example, Michael Miebach was appointed CEO of Mastercard in January 2021. He got a total compensation package of $16.1 million in his first year in the job.

Don’t forget, as I wrote about last week, Amazon already hiked its fulfillment fees a couple of times this year.

It’s just one of many examples of a company expecting its retailers and customers to shoulder its rising costs, while richly rewarding its CEO for just doing his job.

What You Can Do

The pay gap I described above is a factor of The Great Distortion I’ve been telling you about now for a while. The rich have been getting richer, while the average American has paid the price.

But, as with many things in life, there are things you can do to try and level the playing field…

Because if you know where to look, you can use the distortion to your advantage.

For example, like I told you in a recent essay, if you stay invested in the stock market for 20 years or more, you won’t walk away empty handed.

One way to do that is with the Vanguard S&P 500 ETF (VOO). This exchange-traded fund (ETF) allows investors to gain exposure to the price movement of the 500 companies in the S&P 500 index.

It’s a straightforward investment you can access in your regular brokerage account. The fund doesn’t try to outperform the index. Instead, it aims to replicate its performance as closely as possible.

P.S. America has become a land of extremes, where the winners take all and everyone else settles for the scraps. Experts estimate we could see 263 million people fall into poverty in the coming months.

In a presentation I recorded earlier this year, I reveal the strange force that’s strangling the middle class. And how you can get on the right side of the widening gap in American society. Just click here to watch it.