If the stock market has you losing sleep this year… I get it.

Still, the Fed’s hawkish stance to tackle inflation head on is putting the cheap money in doubt.

And investors aren’t as hot for stocks as they used to be. The latest Gallup poll shows that this year, around 58% of Americans own stocks. Two decades ago, that number was closer to 62%.

But selling out of the stock market – or staying out of it altogether – is a mistake. Even in times of turmoil like we have right now.

I’ll show you why today. And I’ll let you in on an often overlooked weapon in the markets… One that gives Main Street investors a massive edge over Wall Street.

The Beast the Stock Market Is

The stock market has been the best performing asset class historically by far. That’s even when factoring in inflation.

Let me provide a quick illustration…

But say you invested the same 100 bucks in corporate bonds instead. It would only be worth about $54,238.

Meanwhile, U.S. Treasury bills would have netted you only $8,527.

And, of course, if you had kept that $100 stuffed under the mattress it would have lost roughly 95% of its value.

But here’s the unfortunate part.

The average investor will only make about 2% per year on their money. That’s, of course, nowhere near what the stock market is capable of returning.

So how come the average investor only manages a measly 2%?

You see, the average investor will always try to time the market by buying low and trying to sell high.

Usually, what they wind up doing instead is buying high and selling low.

Put another way, they buy stocks when they are expensive and sell them when they are cheap. The former happens because of greed, or FOMO (short for “fear of missing out”), and the latter because of fear.

That’s because most investors don’t know how the market works.

The truth is quite simple…

If you want those sweet returns, you must be able to stomach some volatility.

For example, global investment firm Guggenheim noted in its 2019 report that 5% to 10% corrections in the S&P had been regular occurrences.

But as you can see in the table below, deeper declines happen too.

The good news, for long-term investors, is that severe pullbacks of 20%-40% don’t last very long. On average, they last only 14 months.

The second takeaway is that while 40%+ drops may happen too, they are pretty rare. And while it takes longer for the market to recover – close to five years, on average – stocks do recover.

But training your mind to deal with some crazy drawdowns in the market is the only way you make money over the long haul when you average it all out.

The Truth About the Markets

Granted, the markets (and our world in general) offer plenty of scares that will have you running and hiding if you let them.

And, of course, whenever something bad happens, you have pundits either saying “it’s different this time”… or calling for the end of the world.

But the truth I wish everyone knew is this…

Whether it’s a recession, a global conflict, a currency crisis, or the Fed hiking interest rates… there will always be a reason to sell that sounds smart in the moment.

But if history is any guide, there’s a good chance you’ll kick yourself later if you do sell on those fears. Take a look at the chart below… 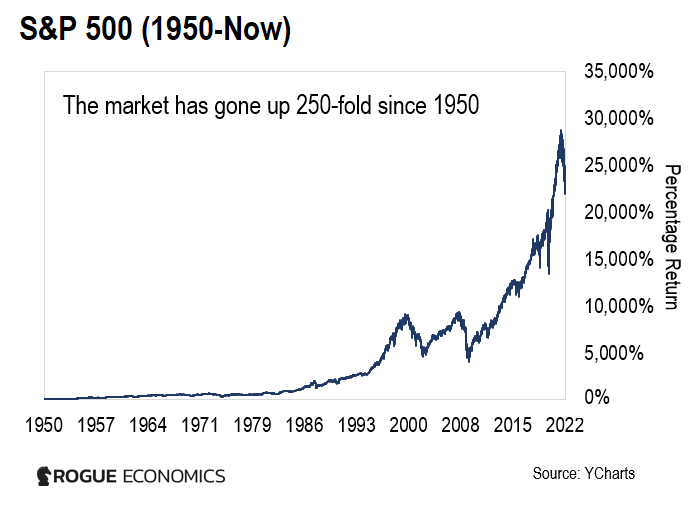 We had the Vietnam War, The Cold War, The Oil Embargo, and numerous recessions, among other things.

The first two decades of the 21st century also had their share of wars, economic crises, and general financial instability.

What This Means for Wall Street and Your Money

Now, let me get to the best part…

The longer you stay invested in the market, the more you increase the odds of making money from it.

And if you stay invested for 20 years or longer, you boost your chances of making money to 100%. Just take a look at the next chart. 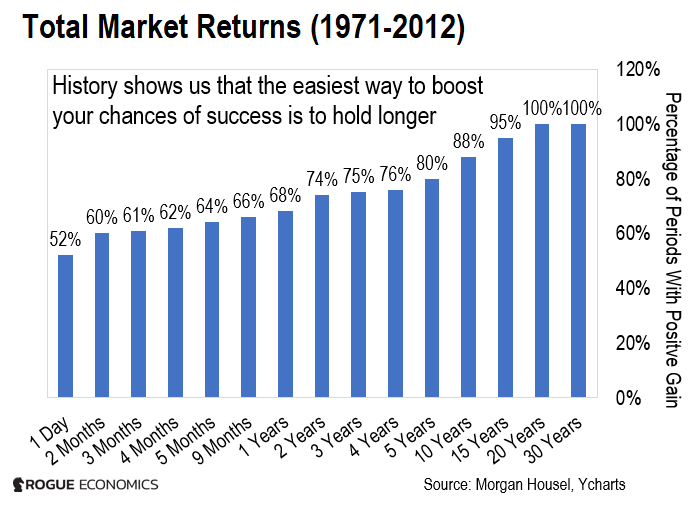 It’s broken down by holding period – from one day, all the way to 30 years. And it shows the percentage of periods that earned a positive return.

As you can see, the longer you hold, the more likely you are to see positive returns.

In fact, if you hold for five years or more, the odds of earning a positive return on stocks get closer and closer to 100%.

And, historically, there’s never been a 20-year (or 30-year) period where you would have lost money.

And that’s a huge advantage you have over Wall Street.

You see, Wall Street has more information than you. But professional money managers are also notorious for having a short-time horizon.

They rely on frequent trades – and they need to demonstrate “immediate results”. This forces them to deal with more randomness and risk.

But if you’re a long-term investor, you have time on your side.

Now, as I’ve shown you, it’s not going to be a smooth ride. But if you stay invested for 20 years or more, you will not walk away empty handed.

In fact, if you play your cards right, you could walk away a millionaire.

And after that peak has been taken out, it will probably go to 6,000 on the next bull run.

This may not happen today or tomorrow, but I believe it will happen sometime over the next 24 months. And again, that’s using history as a guide. It could also happen much sooner than that.

So, for anyone investing in stocks, my advice is simple…

Don’t give up when the going gets tough. And don’t let the market shake you out. History is on your side.

P.S. As I mentioned, if you play your cards right in the markets, you could walk away a millionaire. It might not happen overnight… But fortune favors those with the patience – and the resolve – to stay in the markets through the good times and the bad.

But how do you know which cards are the right ones to play? That’s what my team and I are here for.

At our Distortion Report advisory, we follow five key profit trends. These are the five trends we believe offer the biggest moneymaking potential. And we identify the top names to take advantage of those massive trends.

To learn more about how to get on the right side of these five trends, watch this video presentation I released this year.