Several readers have been in touch in recent months to share their concerns about the widening gap between the earnings of the financial elite and ordinary Americans.

And I agree. Not only that, but as I wrote in my reply to Jerry in a recent Mailbag edition:

This is another sign of The Great Distortion I’ve been telling you about between the financial elite and ordinary Americans. The money keeps flowing to the top, while everyone else gets screwed over!

So today and tomorrow, in a special two-part series, I want to pull back the curtain on that old boys’ club.

I’ll show you exactly how this pay gap has developed over the years… and why it’s only getting worse.

But before I begin, I want to quickly remind you about an urgent, free event I’m holding tomorrow night. It’s called Great Distortion: The Next Chapter…

At 8 p.m. ET tomorrow night, I’ll reveal the details of a new strategy I’ve been testing and perfecting over the last two years. It could help you make up to 10x your money – sometimes, in just a few weeks.

So if you haven’t signed up for tomorrow’s briefing yet, don’t miss your chance. Click here to automatically reserve your spot now.

Now, let’s get to today’s essay. But I have to warn you, some of what you read below will shock you. So strap yourself in…

Making Hay in All Weathers

Millions of Americans were out of work. But, for those who remained employed, typical worker compensation rose by just 3.9%.

That wage growth is likely overstated, though.

Because job losses were high among low-wage workers… which probably skewed the average wage higher.

But this wealth gap between CEOs and ordinary workers didn’t start with the pandemic. And it likely won’t go away with it, either.

From 1980 to 2020, the average hourly pay of workers in America grew by just 17.5%, as you can see in this chart. That’s according to the Economic Policy Institute (EPI). And it has adjusted the figures for inflation. 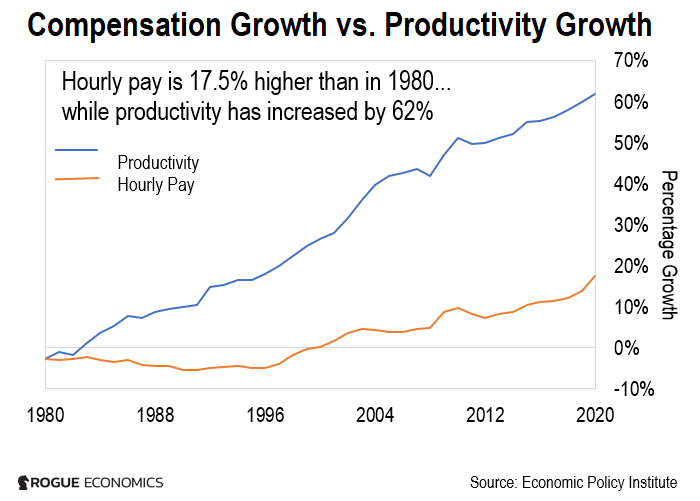 The EPI also tells us that during that same period, productivity increased by about 62%.

So workers’ wages have not risen in line with productivity.

That’s a kick in the teeth, for sure…

But it gets worse…

You see, whatever pay rises the average American has managed to squeeze out, it’s nothing compared to his bosses…

CEO pay grew by a whopping 1,322% (adjusted for inflation) during that same four-decade period.

So it’s no surprise that the gap between the earnings of the average American worker and those of his CEO has widened significantly, too…

In the three decades before 1980, CEOs were paid, on average, about 20 times more than the average American worker.

But as you can see in the chart below, in 2020, CEOs were earning more than 200 times their workers… 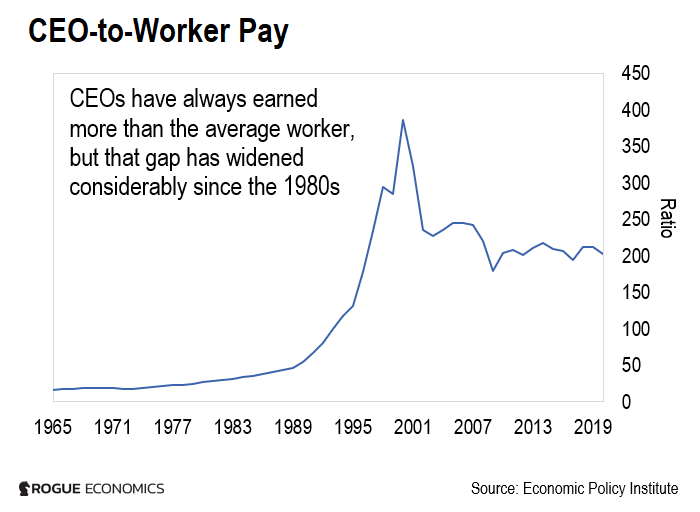 Now, you may say, “Well, CEOs have a lot of responsibility. I’m ok with them being paid more than me.”

But there’s another, even more shocking, angle to this.

Because there’s another element of CEO compensation that isn’t typically available to the average worker… Stock options.

Today, stock options tend to make up the lion’s share of CEO compensation.

A CEO can cash in a stock option any time – typically, when the company’s shares are riding high.

So when you include the value of their stock options when they cashed them in, CEOs earned 351 times the average American worker in 2020. 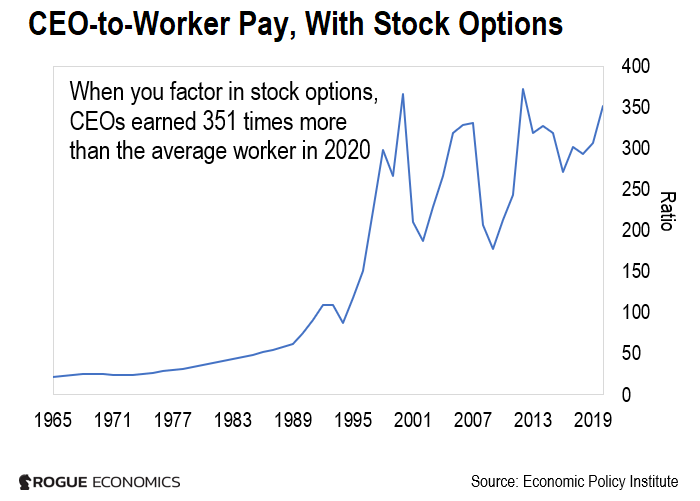 Ordinary workers would have had to work 350 days of the year to earn that.

It seems like the money keeps flowing to the top, while everyone else gets screwed over.

This is yet another sign of The Great Distortion between the financial world and real America I’ve been telling you about.

As I mentioned earlier, I’ve developed a way to help you even the score…

It involves a new strategy I’ve been testing and perfecting over the last two years.

It’s based on the systems and analytics that my employers at Chase, Lehman Brothers, Bear Stearns, and Goldman Sachs paid me millions to develop during my 15 years working on Wall Street.

In these distorted times, it could help you make up to 10x your money in less than a month…

And the timing couldn’t be better. That’s because there’s an event guaranteed to happen this August…

I believe it could unleash a $4 trillion market shock… and kick off the next chapter of The Great Distortion.

Using my new system, you can take advantage of this distortion… whether the markets go up or down.

In today’s extremely volatile markets, which I know have been tough for everyone, I bet that sounds like music to your ears!

To find out more, join me for my urgent briefing tomorrow night at 8 p.m. ET. I’ll reveal all the details then…

And to thank you for attending, I’ll even reveal the name of a stock my system is flashing a “buy” on right now so you can get started making money straight away.

So don’t delay. Click here to automatically sign up – for free – right now… and be sure to tune in tomorrow night at 8 p.m. ET.

I look forward to seeing you there.

P.S. Tomorrow, in the second part of this two-part series on CEO pay, I’ll show you who’s leading the way in this “old boys’ club.” And why even the top 0.1% of American earners wouldn’t be admitted.