Is the U.S. in a recession?

That question is on many people’s minds today.

Last week, government statistics came in for the second quarter of 2022.

They revealed that U.S. Gross Domestic Product (GDP) fell by 0.6%. That followed a drop of 1.6% in the first quarter.

So, by traditional measures, recession is here.

And yet, the Biden Administration insists we’re not in a recession.

The White House even went as far as to question the common definition for a recession, the week before the GDP numbers came in. From its official blog on July 21:

What is a recession? While some maintain that two consecutive quarters of falling real GDP constitute a recession, that is neither the official definition nor the way economists evaluate the state of the business cycle.

If this has you feeling confused about what’s going on in the economy… and what moves to make with your money… you’re not alone.

According to a survey by Allianz Life Insurance Company of North America, 66% of Americans worry that a major recession is right around the corner. That’s up from 48% who said the same a year ago.

But don’t worry. In this essay I’m going to show you where I stand on this controversy, and what it all means for you.

A recession is generally when a country sees a negative GDP growth figure for two quarters in a row.

This has been an objective measure, which most economists and politicians have taken as a given, for at least half a century.

But not so fast…

After the GDP figure came out, President Biden was quick to point out that the U.S. “is not in a recession.”

He added – somewhat contradictorily – that it’s “no surprise that the economy is slowing down.”

All the while, economists and strategists are split on whether we’re in a recession or not.

But there’s more to the story…

The official arbiter of recessions in the U.S. is the National Bureau of Economic Research (NBER).

A panel of eight economists make up its Business Cycle Dating Committee. They’re the individuals who will officially say whether the U.S. is in a recession.

In other words, two straight quarters of negative economic growth may look, sound, and smell like a recession…

But we’re not officially in it until the NBER says so. And right now, according to the NBER president, the committee does not think we are in an actual recession.

In fact, the committee has explicitly rejected the “outdated definition” of a recession as two consecutive quarters of negative economic growth.

But the committee has also previously said that it “views real GDP as the single best measure of aggregate economic activity.”

If this makes you go “hmm” and scratch your head, you’re not alone either.

But here’s where things really get interesting.

Going back to 1949, the U.S. economy has had two or more consecutive quarters of negative growth 10 times.

Out of those 10 times, can you guess how many times the NBER eventually declared we were in a recession?

The answer is 10. They declared a recession every single time.

All this makes people suspicious about the government moving the goal post.

It also doesn’t help that the current administration has been pushing against the two-quarter definition aggressively – like in the blog post I showed you above.

Or the fact that even Wikipedia, the world’s biggest encyclopedia, recently changed its long-standing definition of recession (and locked the page from further edits).

Definitions aside, you don’t need to be a rocket scientist to know that the U.S. economy is slowing down.

Yes, the 0.9% GDP drop is a smaller contraction in economic activity than the 1.6% drop we saw for the first quarter.

But it’s a contraction, nonetheless. It also undershot the consensus estimate of 0.3% growth.

The government – any government – doesn’t like to admit the economy is slowing down because it makes it look bad. It’s (almost) understandable.

Instead, it wants us to put the technicalities aside.

And it wants us to focus on “whether working people and middle-class families have more breathing room, they have more job opportunities, their wages are growing up.”

But as I pointed out on Fox Business last week, there are other signs of the economy slowing down besides GDP.

For example, the housing market has slowed sharply. Existing-home sales plunged 5.4% from May to June. This marked the fifth consecutive month of declining sales.

Income and spending are also struggling to keep pace with inflation. You can see that in the chart below. 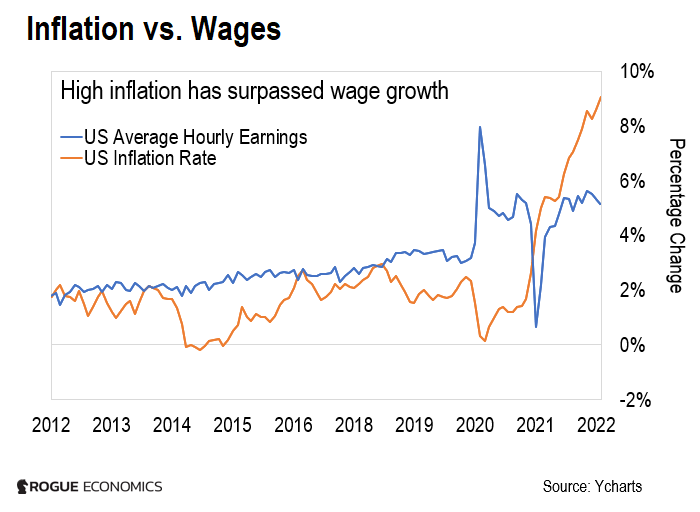 The Consumer Price Index (CPI) rose 9.1% from a year ago. That’s the highest in 41 years. Meanwhile, wages and salaries for workers increased a mere 5.3% in the same period.

That’s not working people and middle-class families having “more breathing room” in my book.

All that said, I remain optimistic that this recession is going to be short-lived and relatively shallow.

This is down to the Federal Reserve.

See, the Fed responds to the market. It understands that if it continues on a path of aggressive rate hikes…

There is a serious risk that it will thrust the U.S. economy into a severe and prolonged downturn.

With higher interest rates, savers get to make a little bit more in their savings account. But borrowers have to spend a lot more on their home loans, auto loans, student loans… you name it.

That means less money to spend on consumer goods. And that’s not good for the market.

Remember, the Fed has an official dual mandate.

The first part of its mandate is to maintain price stability (or fight inflation). The second is to attain full employment.

But as longtime readers know, I believe it also has a third – unofficial – mandate. And that is to protect the markets.

That’s the reason the Fed has started ramping down its self-inflicted “war on inflation.”

As I also said on Fox Business, the main sign of this came from the first sentence of the Federal Open Market Committee (FOMC) meeting comments last week.

The Fed noted that “recent indicators of spending and production have softened.”

To me, that’s the start of the pivot to slowing down the size of rate hikes and moving towards neutrality on monetary policy.

Now, the market was up last Wednesday, when the Fed raised interest rates by another 0.75%. The S&P 500 ended the week up 4.3%. That means investors got exactly what they expected – and wanted.

It also tells me the market is taking it as a sign that the Fed’s pivot to neutral is about to happen.

I’ve been saying for months that the Fed will have to dial back its hawkish stance before the year is out.

The fact that the economy continues down its negative-growth path will help this become a reality soon.

That means the markets may breathe a sigh of relief. And they may begin a path, choppy though it still might be, toward higher prices.

Especially for some of the hardest-hit sectors – like Transformative Technology and New Money – that rely on cheap capital for their growth plans.

P.S. If a recession has you feeling confused about what’s going on in the economy… and what moves to make with your money… you’re not alone.

At my flagship advisory, Distortion Report, I track five investment themes that will benefit from what I call The Great Distortion between the financial markets and the real economy – including the Transformative Technology and New Money themes I mentioned above.

My goal is to use my tenured experience working on Wall Street to help you secure financial freedom. To learn more about this Distortion… and what it means for your money… watch this.