Greetings from Washington, D.C. I’ve been in our nation’s capital this week for meetings with Congresspeople and senior staffers. I’ve met with them regarding topics ranging from infrastructure to shareholders’ rights.

Nomi at the Capitol Building in Washington, D.C. this week

But the main thing that brought me here was the Fed’s Federal Open Market Committee (FOMC) meeting that took place on Tuesday and Wednesday. It was a pivotal one.

The Fed had not raised interest rates since 2018. But in January, with U.S. inflation at 7%, Fed Chair Jerome Powell telegraphed its intention to raise rates by up to 50 basis points at the March meeting.

This stance softened slightly in recent weeks. Powell announced that he was “inclined to propose and support a 25-basis-point rate hike.”

And he hedged his bets by saying the Fed would “proceed carefully as we learn more about the implications of the Ukraine war for the economy.”

So this week, the world watched to see what the Fed would do…

Would it raise rates by 50 basis points to put the brakes on runaway inflation?

Or would it raise rates by only 25 basis points?

Or… would it announce a delay in its rate hike plans?

As I told you earlier this week, I always believed the Fed would only raise rates by 25 basis points at this meeting.

And that’s exactly what happened.

There’s one key reason the Fed can’t raise rates by any more than that right now. But it isn’t to do with the situation in Ukraine and the uncertainty that has created in global economies.

It’s because of the distortion between the markets and the real economy I’ve been writing to you about.

The Fed (and other major central banks) has created that distortion through its easy-money policies.

But the average American is still trying to recover from the damage caused to his livelihood during the pandemic-related shutdowns.

The Fed’s easy-money policy has implications for your money. I’ll get to that in a second.

But first, realize this: Officially, the Fed has a dual mandate.

The first part of its mandate is to maintain price stability (or fight inflation).

The second is to attain full employment.

But I believe it has a third – unofficial – mandate. That is to protect the markets.

Too Little, Too Late

One way it does this is through a policy of low interest rates.

The Fed set interest rates at effectively zero percent in the wake of the financial crisis of 2008. It has tread softly on rate hikes ever since. 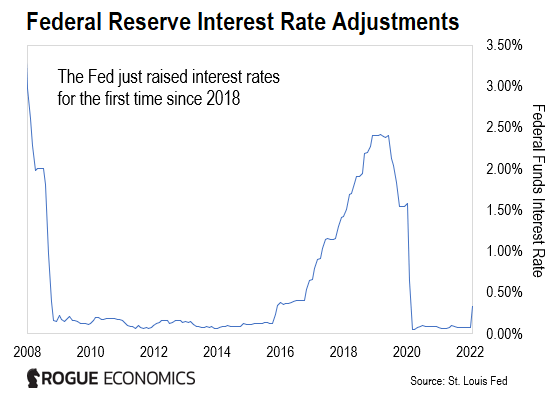 In July 2019, economic growth around the world was slowing down.

So the Fed pivoted to cutting rates. It announced three rate cuts in 2019. And two further cuts in March 2020, which effectively brought it back to zero.

Yes, inflation was lower then than it is right now. But the Fed got it totally wrong when it characterized inflation as “transitory” early last year.

And the reality is that it is too late now to contain that inflation. It’s simply too little, too late.

So now, if it raises rates too quickly or by too much, it runs the risk of creating too much market volatility.

You see, the Fed will always err on the side of not disrupting the markets, regardless of what happens to inflation or the economy.

Its actions yesterday don’t change how it keeps markets awash in cheap money at all.

Another way the Fed protects the markets is by maintaining a large book of assets.

That’s why it was so careful with its messaging on quantitative tightening (QT), or reducing the size of its books, after this recent FOMC meeting.

Powell said this could start at the FOMC’s next meeting in May. But he did not provide any further detail.

The last time the Fed halted its quantitative easing (or QE) bond-buying program was in October 2014. The size of its book was $4.5 trillion.

It also allowed the bonds already on its books to mature without replacing them with new ones. That’s the “balance sheet runoff” we wrote about earlier this year.

Since the pandemic, the Fed’s book ballooned to its current size of nearly $9 trillion.

All that fabricated money contributed to the distortion we now have between the financial markets and the real economy.

And because of its unofficial third mandate, the Fed is obligated to keep the money spigots open.

So it is unlikely to make any significant changes to the size of its book right now.

The Fed was too late at preventing – or even noticing – runaway inflation. In April 2021, annual inflation had shot up from 2.6% to 4.2%. Powell called it “transitory.”

Now, with inflation at a 40-year high of 7.9%, the Fed is signaling further rate hikes this year.

But it will take its cue from the markets, as it’s been doing for years. And markets like cheap money.

So, much as the Fed may want to raise interest rates to curb inflation… it can’t risk a market crash to do so.

That’s why the best thing to do is to ignore the noise from the mainstream media. Hold your positions.

And view the choppiness in the markets right now as potential opportunities to buy your favorite stocks when they dip.

P.S. I stopped by Fox studios in Washington yesterday to discuss the results of the FOMC meeting. On Fox Business, I stated that I don’t believe the Fed will raise rates by 50 basis points at its next meeting. You can catch my full interview here.

That’s because there are too many uncertainties in the world right now.

These include the war in Ukraine, the possibility of a general economic slowdown due to rampant inflation, new Chinese lockdowns due to surging coronavirus cases there, global supply chain problems, and general geopolitical turmoil.