Yesterday, I wrote to you about the link between the cost of the food we eat and the energy we use to make it. The two prices rise and fall in tandem.

And unfortunately, this morning’s U.S. inflation readings show they’re both still rising… though the good news is that they’re not rising by as much as last month.

Energy prices in the U.S. are up 30.3% over the last year. The World Bank expects energy prices to soar up to 50% higher this year.

And food prices are set to rise as a result. The cost of the food we eat at home has already gone up by 10.8% in the last 12 months. And the World Bank says food prices will soar by more than 20% this year.

Today, I want to tell you about another dark cloud that’s hanging over your dinner table… one that will push food prices even higher.

But don’t worry… As usual, I’ll show you a way to counter it, too…

Fertilizers are food for the plants that feed us. They are vital for global food production.

Without them, you wouldn’t have the same choice of fruits and vegetables when you go to the store. There just wouldn’t be enough to go around.

But over the last year, the price of fertilizer has gone vertical. You can see this in the chart of the Fertilizers Price Index below. 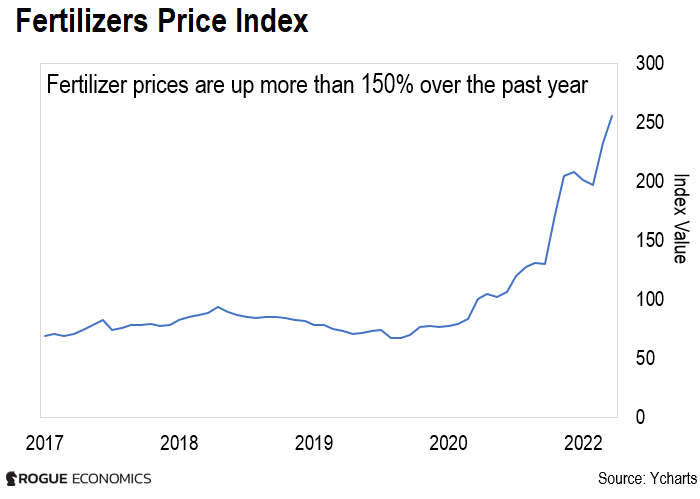 So if a farmer paid around $250 for a ton of nitrogen fertilizer last year, today, he’s paying on average $625 per ton.

And there are no signs of fertilizer prices coming down any time soon. In fact, there are several reasons why they’re set to soar even higher…

One of the key ingredients in fertilizer is ammonia. It’s a byproduct of natural gas.

And that’s precisely the problem. Natural gas has gone up almost 170% over the past year, as you can see in this next chart. It shows the natural gas price from the Henry Hub pipeline.

The Henry Hub is the pricing point for natural gas futures on the New York Mercantile Exchange (NYMEX). It serves as a benchmark for the entire North American natural gas market and parts of the global liquefied natural gas (LNG) market. 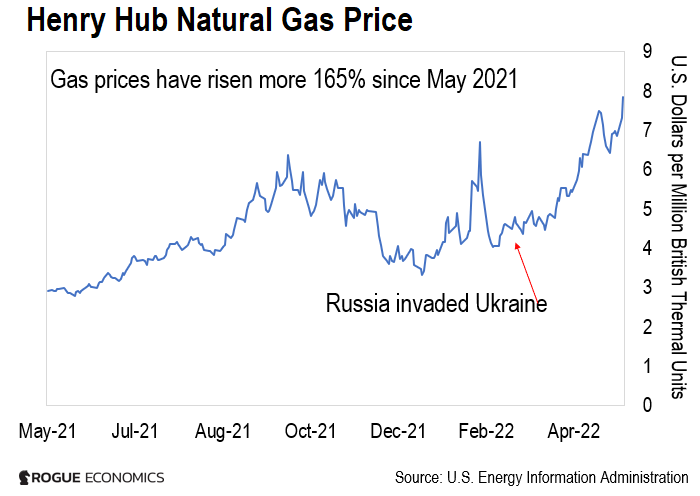 As you can see from the chart, gas prices have been trending higher over the last year. But the continuing war in Ukraine has taken it to a whole new level.

Since the start of “Russia’s special military operation” there, natural gas has soared 75%.

And as I told you yesterday, the European Union’s proposed ban on Russian oil, if approved, will have a significant impact on global energy supply and prices.

This could have a knock-on effect on the supply of ammonia needed to make fertilizers.

That’s because 77% of ammonia production is based on natural gas. And most natural gas occurs alongside deposits of crude oil.

And as with any product, if the raw materials it needs are in short supply, the price goes up. So fertilizer prices could increase further as a result of the proposed E.U. ban on Russian oil. And that will push food prices up, too.

And there’s another reason why I’m convinced the price of fertilizer – and therefore, food – will keep rising this year…

In early March, it announced that it was temporarily suspending fertilizer exports.

These bans were to end this month. But they were reportedly extended until August 31.

This is all having a big effect. Together, the two countries are responsible for about 33% of global trade in fertilizer. 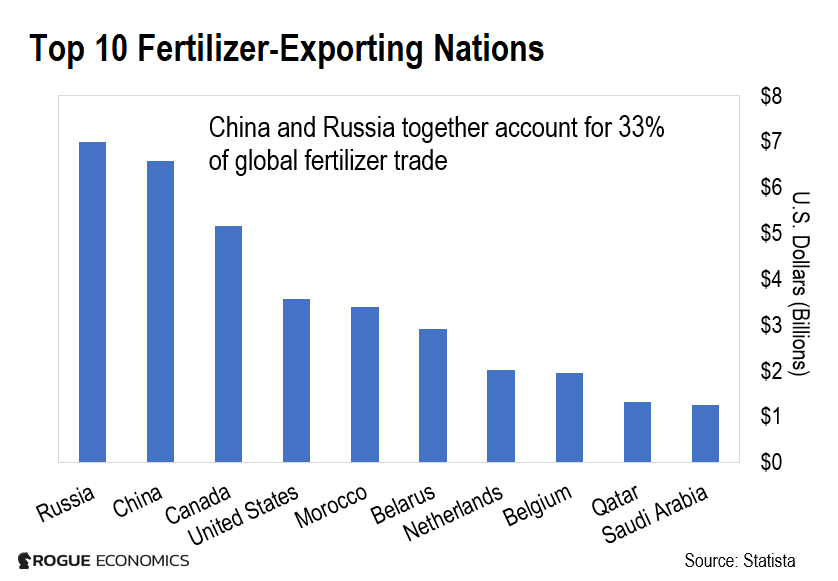 I’m not entirely convinced Russia and China will lift their temporary export bans in August. If anything, with no end to the war in Ukraine in sight, they can easily extend them indefinitely.

So, there’s a double-whammy for fertilizer prices: A huge increase in the price of the essential raw material (ammonia/natural gas) and a squeeze in the supply of the finished product.

And there’s even more bad news…

The Eastern European country of Belarus is the sixth-largest fertilizer exporter in the world. As you can see in the previous chart, it exports nearly $3 billion worth of fertilizer annually.

It also produces just under 20% of global potash, another key ingredient in fertilizer. One of its biggest state-owned companies, Belaruskali, is among the largest producers of potash in the world.

But Belarus has a problem. The West has been slapping it with harsh sanctions. This is due to its support for the Russian invasion of Ukraine.

Earlier this year, for example, Lithuania terminated its state-owned railway contract with Belaruskali. Lithuania is Belarus’ gateway to international markets. It handles about 90% of Belaruskali’s potash exports.

Also, Belarus isn’t allowed to trade in U.S. dollars, thanks to U.S. sanctions.

Yes, you read it right… One of the world’s largest fertilizer producers has difficulty selling to its customers.

Now, in a bid to keep the potash flowing, Belarus has diverted some potash shipments to Russian ports. But it remains to be seen what volume it can ship and how quickly.

One thing is certain: Any disruption to the supply of potash from the region will impact fertilizer prices… and thus, food prices…

Bringing It All Together

As I showed you yesterday, when energy prices go up, you get higher food prices and less of it.

That seems to be the situation the world is facing right now.

Meanwhile, the war in Ukraine is intensifying the energy crisis and supply chain issues I discussed in my earlier essay on rising food prices.

The bottom line is that rising natural gas prices… the fertilizer supply squeeze from Russia and China… and a restriction in the supply of potash from Belarus… will lead to higher fertilizer prices.

By extension, food prices will rise, too.

How to Make This Work For You

But there is some good news… And I’m sure that’s something you’re on the lookout for with all the gut-wrenching volatility in the markets right now.

You can make this unfortunate situation work in your favor.

One way to do that right now is with the iShares MSCI Global Agriculture Producers ETF (VEGI). This exchange-traded fund (ETF) gives investors indirect exposure to agricultural commodity prices by investing in international companies engaged in the agribusiness.

It’s a straightforward investment you can access in your regular brokerage account. As an exchange-traded fund (ETF), it also carries less company-specific risk than investing in individual companies.

You can also buy shares of the Invesco DB Agriculture Fund ETF (DBA), which I highlighted in yesterday’s essay. This exchange-traded fund (ETF) includes wheat, corn, soybeans, and other food staples.

As I explained yesterday, DBA is comprised of futures, not companies, in these areas. That means it captures more isolated price movements compared to companies that may use or produce these products.

Like most assets, VEGI and DBA have taken a hit in recent market volatility. But both are up over the last six months, whereas the S&P 500 and the Nasdaq are both down. So VEGI and DBA are good hedges.

And the recent pullback makes for an excellent buying opportunity. Buying on a pullback is a great way to counter market volatility, such as we’re seeing right now.

P.S. The world’s historical focus on traditional fossil fuels has led to the energy crisis we’re seeing today. And as I’ve shown you over the last two days, spiraling energy prices don’t just affect your gas bill. They’re pushing up your grocery shopping bills, too.

The war in Ukraine is just one in a long line of catalysts forcing governments to shift focus from fossil fuels to renewable energy sources.

And there’s another huge event coming up that will put this trend into overdrive.

It will have a massive ripple effect… throughout the entire economy. In fact, it will shake the energy market to its core.

And the best part: If you know where to look, you could double… or even triple… your money over the next 12 months. Click here now to watch my special presentation and find out more about this latest energy crisis… and how you can position yourself to profit.