If you haven’t heard of them, don’t worry. You’re not alone. Most people haven’t.

Yet these metals are essential to modern life.

There are 17 rare earth elements (REEs). They are usually found together in nature. And they’re included on the Periodic Table.

Europium is needed for lasers and fluorescent lights.

And Neodymium is used in cell phones and laptops.

Even the screen on which you are reading this essay depends on REEs.

You can’t make the advanced electronics in these fighter jets and consumer electronics without REEs. And crucially, there’s no substitute for them.

The U.S. military and U.S. consumers are wholly dependent on them.

But REEs rarely make the headlines.

And that’s precisely what spells opportunity for investors.

The Problem with Rare Earths

But the name is a bit of a misnomer.

REEs are actually not that rare. In fact, in many parts of the world, they’re abundant.

But finding REEs in concentrations that make them economic to mine is difficult. And once you’ve found them, mining and processing them is even more challenging. It’s messy and expensive.

For instance, to get 500 pounds of REEs, miners have to move and process around 88,000 pounds of rock.

And doing so in an environmentally friendly way is even trickier.

Dominant Supplier Holds All the Power

However, there’s one country that’s been able to pick up the slack – China.

You see, there are a few reasons why China is willing to do the hard and dirty work other countries avoid.

First, it doesn’t fret about the environmental fallout. This allows it to produce REEs at a much lower cost than its competitors.

This backing has enabled it to mine and export these materials at prices far below actual production costs.

As a result, many mines in the U.S. and elsewhere are unable to remain profitable against cheap Chinese exports. Many have gone out of business.

That’s how China came to dominate this strategic industry.

Today, China produces and processes almost 60% of global REE supplies, as you can see in this chart.

And it could restrict rare earth supplies overnight.

This isn’t some wild speculation. China has done this before.

In 2010, it triggered one of the most spectacular REE booms in recent memory.

It all started with a Chinese fishing boat. It was sailing in disputed waters when it collided with a Japanese coast guard patrol boat.

The incident sparked a major diplomatic dispute between the two countries. China cut off all REE exports to Japan and cut global exports by 40%.

As you can see in the chart below, some REE prices went vertical as a result.

This caused a veritable mania in REE stocks that lasted for nearly a year. Many of them reached record prices.

More to the point, the incident was clear proof that China is willing to use REEs as a weapon.

To say that U.S.-China relations were grim under President Trump is probably an understatement.

But U.S.-China relations have not “reset” under President Joe Biden in the way many expected.

You may not hear about it in the mainstream media every day, but the U.S. and China remain locked in a trade war.

U.S. tariffs on $350 billion of Chinese products are still in place. And due to the effects of the pandemic, China has been unable to fulfill its promises to purchase $200 billion in U.S. agricultural and other products.

Meetings between Biden and Chinese leader Xi Jinping have borne no real fruit.

I don’t see this situation changing any time soon. Especially since China formally accused the U.S. of instigating the war in Ukraine.

If U.S.-China relations continue to deteriorate, it could lead to another mania in REEs.

Granted, this may sound speculative. But if history is any guide, there’s a good chance it may happen. China has vaguely threatened to restrict exports of REEs again in recent years.

That spells an opportunity for savvy investors willing to get ahead of the potential stampede into REEs.

Right now, REE prices are still near their lows for the cycle.

Since they hit all-time highs in January 2011, REE stocks have lost 68% of their value.

You can see this decline in the chart below. It shows the VanEck Rare Earth/Strategic Metals ETF (REMX), which is widely used as a proxy for the rare earths sector. 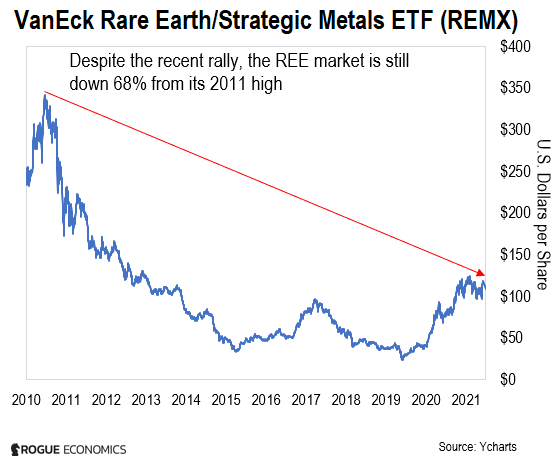 However, they started trending upward as U.S.-China relations deteriorated under Donald Trump. And that trend has continued with Biden in the Oval Office.

To me, this indicates an attractive entry point.

How to Play This Rare Setup

The best way to get exposure to rare earths prices is to buy shares in REE-related companies. But investing in REEs isn’t easy.

Unfortunately, there isn’t a large list of quality companies mining REEs. Also, nearly every company that produces a meaningful amount is listed in China. So it’s difficult for everyday investors to access them.

Many other large mining companies produce only small amounts of rare earths. So they’re nowhere close to pure REE plays.

The good news is that there’s another way to take advantage of this opportunity.

The ETF I mentioned above, the VanEck Vectors Rare Earth ETF (REMX), is a straightforward REE investment you can access with a regular brokerage account.

It holds companies involved in producing, refining, and recycling rare earth and strategic metals and minerals. So it gives you broad exposure to the REE industry.

And I’m working on an essay about how the U.S. is taking action to fight China’s dominance in the rare earths space… and how you can profit.

So keep an eye out for that in the coming weeks.

P.S. Right now, I’m also tracking another profit opportunity for you… It’s a $150 trillion transfer of wealth that will transform America. And it could transform your wealth, too… if you know where that money is flowing.

I just released an urgent briefing all about it… and how you can profit. To watch it, just go right here.