The energy landscape is changing… forever.

Driving that change is the New Energy revolution I’ve been telling you about.

By 2050, renewable sources – mostly solar and wind – will be responsible for 85% of the electricity generated globally. That’s according to the International Renewable Energy Agency.

This is huge. Today, renewable sources account for just 30%.

So a jump to 85% will require a massive overhaul of our current energy production systems.

I’ve been banging the table about this monumental shift ever since we launched Inside Wall Street with Nomi Prins a few months ago.

And I’ve told you about copper’s massive role in it… and how to profit as its price takes off.

You see, to make the transition a reality, the world will need a lot of copper.

That’s because renewable energy systems – such as solar, hydro, thermal, and air source heat pumps – use up to 12 times more copper than traditional fossil-fuel-powered systems.

But the New Energy transition will increase demand for copper. Management consulting firm McKinsey and Company estimates that demand could jump by as much as 50% over the next 20 years.

And that should push copper prices higher.

But there’s another important reason to be bullish on copper…

You see, just as demand is set to soar, copper supply is under threat…

And it has 62 million metric tons of copper in its reserves. That’s over 7% of the total global copper reserves. And it’s about 30% more than the U.S. holds.

The problem is that Russia’s copper could become unavailable.

The West has slammed Russia with unparalleled sanctions in an attempt to get it to stop its invasion of Ukraine.

It has frozen Russia’s foreign assets. It has kicked many of its major banks off SWIFT (a global interbank messaging system).

Here in the U.S., President Biden banned all Russian oil and gas imports. Meanwhile, the European Union (E.U.) vowed to cut its reliance on Russian gas by two-thirds this year.

And we saw what happened to the oil price. It jumped to more than $120 a barrel in March. It remains above $100 per barrel today. A year ago, it was trading around $60 per barrel.

Sanctions By Another Name

But with no sign of Russia calling off its war in Ukraine, it’s certainly a possibility.

The LME is the world center for the trading of industrial metals. It’s where the majority of all non-ferrous metal business happens.

Put another way, the LME taking such a step would affect all participants in the copper trade worldwide. And other marketplaces may follow suit.

It remains to be seen if this recommendation will become a reality.

But even without a full-on ban, Russian copper exports are already affected.

The bulk of its copper exports to China flow via the Black Sea or through European ports such as Rotterdam.

However, self-sanctioning by logistics companies has thrown a wrench into Russia’s seaborne trade. As a result, these shipping routes are becoming increasingly less open to Russian trade.

According to Goldman Sachs, this could remove up to 50,000-60,000 metric tons of copper per month from the market.

Copper Market Is in a Precarious Position

Remember, that’s 1 million metric tons per year. You can see the potential effect in the next chart… 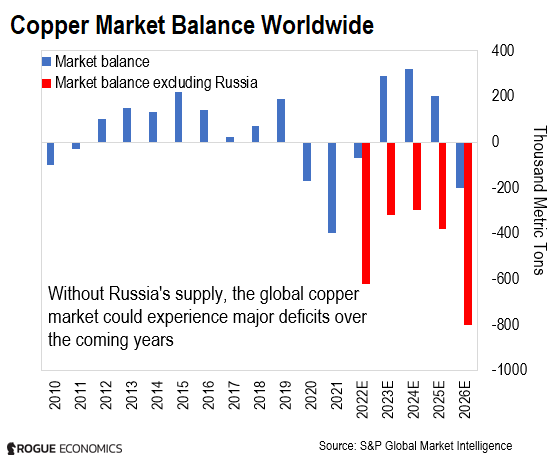 The bars above the zero mark represent surplus. Those below it show deficits. The red bars indicate deficits without Russia’s supply.

As you can see, without Russian copper, the global copper market could fall into deep deficits as early as this year.

And there are problems brewing in other major copper suppliers, too…

Copper production in the world’s top copper producer, Chile, is down more than 6%. And in Peru, production at Las Bambas mine – that accounts for 2% of global copper supply – has stopped due to protests.

Global supplies are under threat… just as all the signs are pointing towards increased demand.

But as I mentioned earlier, the New Energy transition is set to forge ahead.

In fact, as I showed you last month, Russia’s invasion of Ukraine is a catalyst. Global governments are trying to reduce their dependence on Russian oil and gas. So they are dashing into new energy.

This means more and more copper will be needed – up to 50% more.

“Well, why don’t they just build more copper mines?” you might ask.

It’s not that easy. It takes decades to build a world-class copper mine.

Unfortunately, many copper mines are in countries plagued by political unrest. So the risk of the government changing its mind after a coup or an election, and kicking miners out, is all too real.

That makes it difficult for miners to raise the billions required to build these mines.

And since no one is building new mines, there’s only so much of the metal to go around.

Even if prices rise high enough to encourage the necessary mine development, it will still take years for those mines to come online.

How to Play This Opportunity

A great way to position yourself for rising copper prices is with the United States Copper Index Fund ETF (CPER). The fund closely tracks the price of copper, offering convenient exposure.

P.S. Russia’s potential copper ban isn’t the only catalyst that could give copper a major boost. Right now, politicians have their eyes set on a $150 trillion transfer of wealth – one that will transform America.

It involves the overhaul of the energy system needed for the New Energy transition. And it could transform your wealth, too.

That’s why I just released an urgent briefing about where this money is flowing… and how you can profit from it. To watch it, just go right here.