The war in Ukraine is creating untold hardships for its people.

If you’ve filled your tank at the gas station or bought home heating oil, you’ve probably noticed a big increase in your bill the last few weeks.

After a brief spike on that announcement, oil prices are actually down this morning.

That’s because the ban was widely anticipated by the market. It was already priced in over the last few days. 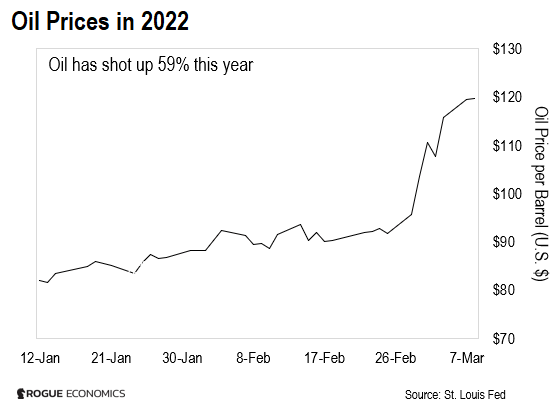 The oil embargo is all part of the geopolitical playbook. It remains to be seen what effect, if any, it will have on the war in Ukraine.

But either way, I don’t see oil prices coming down any time soon.

And in a moment, I’ll show you a way to compensate for that extra spend.

But first, I just want to quickly show you what happened to oil during previous periods of geopolitical conflict…

There are several examples from the last four decades of conflict causing a spike in oil.

For example, in the two weeks following Iraq’s invasion of Kuwait in 1990, oil prices spiked 25%. During the first two weeks of the Iran hostage crisis of 1979, it went up 5%… and right after the terrorist attacks on September 11, 2001, it jumped 7%.

And as the saying goes, “History doesn’t repeat itself, but it often rhymes.”

When Russia invaded Crimea in early 2014, oil prices increased by up to 11%.

But in the current iteration of the Russia-Ukraine conflict, oil prices are headed for uncharted territory.

Wrestling With the Bear

The West has never been more united in a concerted effort to isolate a country the size of Russia on the world stage.

In a few short days, Western states went from the decades-old policy of trying to appease the Kremlin to slamming it with unparalleled sanctions.

They have frozen Russia’s foreign assets. They have kicked many of its major banks off SWIFT (a global interbank messaging system). They have seized Russian oligarchs’ mansions and yachts.

Mastercard and Visa have blocked all transactions. And the world’s largest companies are pulling out of Russia.

Indeed, Russia is the target of some of the most sweeping economic penalties ever levied upon a country.

Biden’s ban on Russian oil imports is a big step in the West’s fight against Russia.

But so far, no other countries have followed suit. And it’s not hard to understand why.

Finland and Hungary get almost all their oil from Russia. Poland gets more than 55%. Germany and the Netherlands get upward of 40%.

Crucially, the E.U. also gets nearly half of its gas from Russia. This gas fuels Europe’s economy and heats its homes.

Imposing widespread energy sanctions on Russia would risk putting a severe dent in the world’s energy supplies. This would mean higher prices at the pump and elsewhere. And that would hit the global economy hard.

That’s why most countries have carefully designed their sanctions to avoid hitting Russia’s energy exports.

Will the Rest of the World Follow the U.S. Lead?

So why did the U.S. proceed with a ban on Russian oil and gas imports?

The U.S. is far less dependent on Russian oil than Europe. In 2021, only about 8% of U.S. oil imports came from Russia.

As such, the U.S. is in a much better position to wage an energy war against Russia than its European counterparts.

But I doubt the rest of the West will put a full oil embargo in place, as the U.S. has done.

For one, so far, Germany has pushed back against calls from the U.S. for a ban on imports of Russian oil and gas.

Germany is the E.U.’s top economy and the world’s fourth-largest economy. So, its voice counts.

And, of course, German Chancellor Olaf Scholz is not going out on a limb when he says that Europe can’t wean itself off Russian energy overnight.

But her remarks related more to the overall global shift towards greener, cleaner energy than to the likelihood of imposing energy-related sanctions or embargoes to make Putin stop his war.

Concerted sanctions that immediately limit Russia’s ability to export oil and gas everywhere could be a game-changer.

They would cripple the Russian economy. And that could put domestic pressure on Putin to pull out of Ukraine.

On the other hand, they could also exacerbate Russia’s war effort as a retaliatory measure.

But even without global sanctions on Russian exports, there’s an oil market crisis brewing.

The mere prospect of a new war in Europe was enough to send oil soaring. Once again, geopolitics trumped market fundamentals.

And yet, at its monthly meeting last Wednesday, the world’s oil producers resisted pressure to ramp up production straight away to help bring prices down.

The Organization of the Petroleum Exporting Countries (OPEC) is an international alliance of oil producers. It was set up in 1960, and it has a major influence over oil supply and prices.

OPEC+ is the expanded alliance that involves non-OPEC countries including Azerbaijan, Kazakhstan, and Russia.

At its meeting last week, OPEC+ agreed to go ahead with its planned April oil output increase of 400,000 barrels per day.

In other words, no change in OPEC+ strategy, despite the escalating Ukraine crisis and soaring oil prices.

The 23-country OPEC+ alliance controls about half of the global oil production.

OPEC+ is sticking to its guns, despite international pressure to increase oil production significantly.

I’m not surprised. Higher oil prices benefit the group as it tries to recoup losses suffered during the pandemic.

It also makes sense that OPEC is standing by its ally Russia, which needs high oil prices to fund its mindless war.

If OPEC+ doesn’t increase production, the price of oil will likely continue to go up. This way, OPEC and Russia can enjoy greater profits.

There’s no reason for them to change their minds, regardless of the international pressure. After all, the function of a cartel is to drive oil prices higher.

What This Means for You

This brings me to what all of this means for you.

Even without the U.S. ban on Russian energy imports, Americans are already feeling the pinch from record-high gas prices.

On the plus side, our country is far less dependent on Russian oil than Europe. In fact, as of January, almost no Russian oil came into the country.

But as much as Biden says he wants to “limit the pain the American people are feeling at the gas pump,” more pain is likely over the short term.

That’s because, even without the E.U. slapping sanctions on Russian oil, any sanctions have near-term global ramifications on gas prices.

So, what can you do?

Unfortunately, cutting back on gasoline usage is easier said than done. No matter how you slice it, people need to take their kids to school and get to work.

Buying gas in bulk isn’t an option for most folks.

But what you can do is try and make some of that money back in the financial markets.

Keep in mind that oil fundamentals are likely to remain strong for the foreseeable future. And if the E.U. joins the U.S. in imposing oil-related sanctions, oil prices will go through the roof.

A good way to be positioned for all that right now is with the United States Oil Fund (USO). This exchange-traded fund (ETF) tracks the price of West Texas Intermediate Light Sweet Crude Oil.