A product of Elon Musk’s genius…

A “tech on wheels” giant…

A stock market behemoth. For many, the name Tesla brings to mind all those things and more.

And it’s no wonder. Tesla (TSLA) has been a bona fide standout amongst the biggest companies.

In 2022, it became the most purchased stock in the world. It surpassed Apple to become the number one favorite for retail investors.

And yet, the carmaker ended the year down almost 70%. That made it the worst performer among major companies in the S&P 500.

Today, I’ll unpack Tesla’s meteoric rise… why the stock is now in free fall… and what you can learn from it if you have any money in the markets. 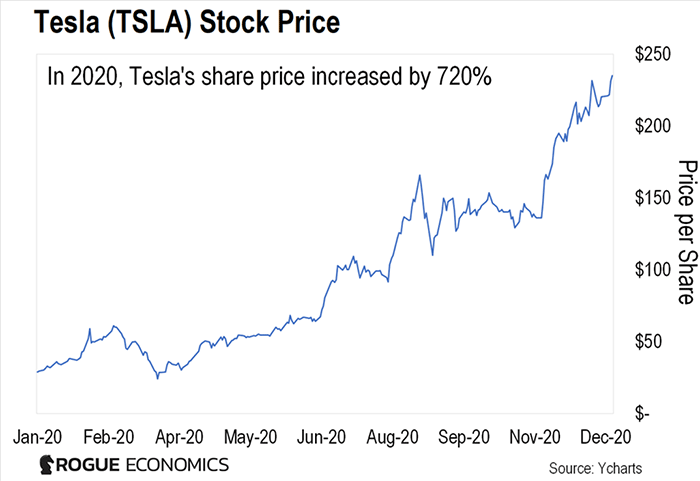 2020 was also the year Tesla became the largest company by market capitalization ever added to the S&P 500. It went on to lead tech stocks to their record highs through 2021.

This wasn’t because Tesla had become a money-printing machine.

Yes, Tesla did deliver an impressive $35 million to the bottom line in 2020. But that was its first profitable year ever.

And yet the market bid up Tesla’s stock price sky-high.

It also helped that Tesla had recently announced expansion plans to China and Europe… As well as two long-awaited cars: the Model Y crossover SUV and the Cybertruck pickup.

But there were outside factors at play, too.

For example, “no fee” trading platforms exploded in 2020. Platforms like Robinhood gave young people an easy, cheap way to invest.

And then there was Elon Musk himself. The Tesla CEO made headlines in September 2021 when his wealth rose above $200 billion.

Musk became the richest person in the world. At his peak in November 2021, he was worth $340 billion.

The media couldn’t get enough of him, and he even went on Saturday Night Live.

But nothing lasts forever. In the last 12 months, Tesla shares have plunged more than 62%. You can see this collapse in the chart below… 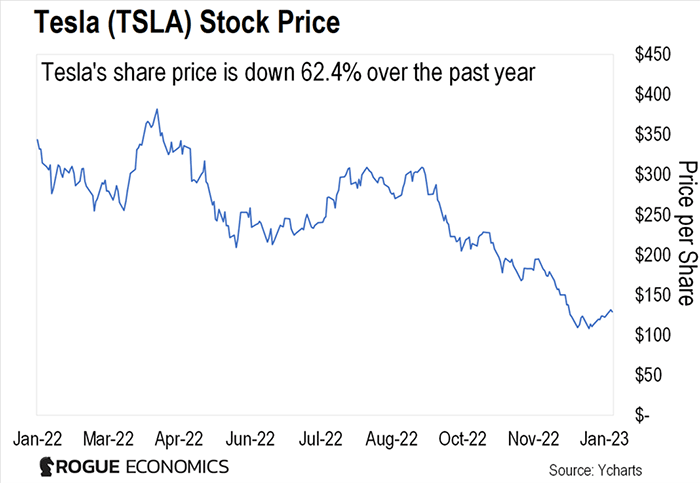 And Musk is making headlines again… But this time, in a class-action lawsuit over his “funding secured” tweet from 2018.

Looking back, Tesla was a victim of its own success. When a stock is priced to perfection, it has nowhere else to go but down.

But there was more to the story, too…

In April 2022, a Securities and Exchange Commission (SEC) filing revealed that Musk was investing in Twitter. He started buying in January, and by March, he was the largest shareholder.

Then, Musk sold $8.5 billion worth of Tesla stock. His reason? To fund his takeover of Twitter.

Tesla investors didn’t like that, and the stock tanked 35%.

Musk promised he wouldn’t sell more of his Tesla shares to finance anything else. But since then, he’s broken that promise many times.

Once again, Musk said he wouldn’t sell any more shares of Tesla for at least 18-24 months. But investors are skeptical.

They also feel that Twitter has become a distraction for Musk. Instead of building Tesla, he’s caught up in the Twitter drama. All the while, the carmaker faces worries about the economy and mounting competition from rivals.

And with the Fed raising rates, investors would rather put their hard-earned cash into something less risky than Tesla.

Be Skeptical of Rockstar CEOs

Tesla’s meteoric rise was based less on fundamentals and more on the belief that it was going to achieve amazing things.

A lot of that revolved around the genius and allure of Elon Musk.

Yes, the billionaire entrepreneur was instrumental in propelling Tesla’s stock to record highs. But now, he’s also proving to be a point of failure in its story.

Musk does still own 13.4% of Tesla. But it’s also about optics, and for the reasons above, those aren’t great right now.

That’s why I’m not a fan of rockstar CEOs.

Personality can only take you so far. And if you have an organization built around one person’s vision and charisma, their mistakes can prove quite costly.

Tesla shareholders are learning that the hard way.

Still, people often ask me if Tesla is a good buy right now. And I do believe it will recover in the long run. But for those looking to buy, I would wait for the dust to settle before pulling the trigger.

Happy investing, and I’ll talk to you again soon.

P.S. At my strategy session last week, I encouraged viewers to avoid Tesla like the plague. I also gave away the name of a stock to buy instead, which I believe will be a winner in 2023. It’s already up 6.2%, but there’s more potential upside ahead.

If you missed it, you can still catch the replay for a few more hours. I’ll give you the name of that stock to buy – for free, no strings attached. And I’ll also pull back the curtain on an “all-weather” strategy that Wall Street loves. It can give you the chance to profit from both the market’s winners and losers this year. Get the details here while the video replay is still online.