Last month, I wrote to you about the importance of rare earth elements (REEs).

REEs are essential to modern life. That’s because they are used to make crucial components for advanced electronics like iPhones, electric cars, flat-screen TVs, computers, and military weapons systems.

I also showed you the chart below. It breaks down global rare earths production by country.

As you can see in the chart below, China is by far the biggest producer and processor of rare earths. It is responsible for almost 60% of global rare earths output. 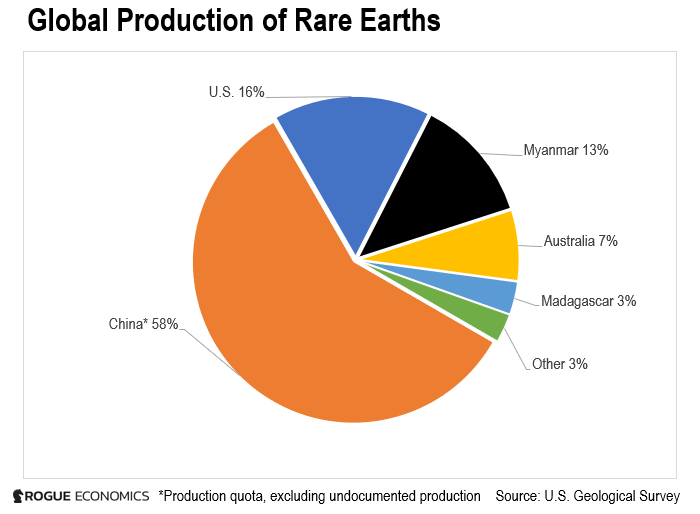 But as I told you in my previous essay, the supply from China is far from guaranteed.

So today, I’m going to show you what it’s doing to reinvigorate the U.S. REE mining industry… and how you can profit as this industry gets the kickstart it needs.

China wasn’t always the leader in rare earths. The U.S. was.

In the 1980s and through the mid-1990s, Chinese production was rising. But U.S. output was still greater than, or on par with, China’s. You can see this in the chart below. 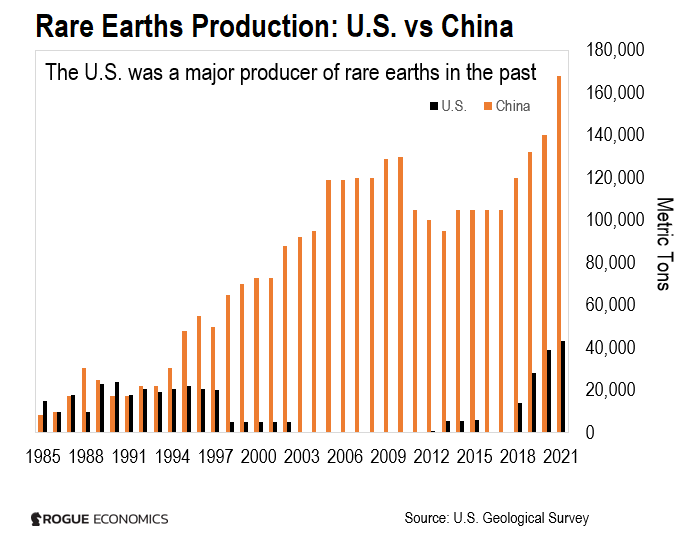 But then, in the late 1990s, U.S. production tapered off… before disappearing completely in the early 2000s.

Why did the U.S. fall behind?

China subsidizing its rare earth mining industry played a role. This meant it could export these materials at prices far below the actual production costs.

But that’s just part of the story… In fact, the blame for America’s departure from the rare earths market lies much closer to home.

Rare earths actually aren’t that rare. Most of them are produced as a by-product of other materials. And in many parts of the world, they’re abundant.

But here’s the rub… A lot of the mines in which rare earths are found also contain significant amounts of uranium. This was certainly the case in the U.S. back in the 1980s.

That wasn’t a problem at first.

But then, the U.S. government imposed strict rules on private companies processing any ores that contained uranium. And this pushed up the cost of production on these shores.

To be clear, the U.S. wasn’t alone in this. Many Western governments took similar measures as fears about global nuclear proliferation mounted.

But this regulation brought an end to rare earths production in America.

Meanwhile, China continued to process rare earths without fretting about the rules other nations chose to abide by.

Scouring the Earth for REEs

Now, America still has the mines that used to supply rare earths. And they still contain valuable deposits.

The problem is virtually no one has been able to mine them.

But this seems to be changing.

In 2019, the U.S. Department of Defense said it would fund REE mines and processors via the Defense Production Act.

As I showed you yesterday, the 1950 law gives the government more control during emergencies to direct industrial production. And, thanks to the 2019 amendment, REE mine funding is already in full swing.

For instance, the Pentagon has helped to pay for the development of a processing facility at a mine in California.

The company operating the mine has already received $44.6 million for the development.

And these efforts are already bearing fruit.

The Pentagon also recently asked Congress to allow the funding of mining projects in Australia and the United Kingdom. Unlike the U.S., these two countries already have several existing processing plants to handle rare earths.

The idea that the U.S. government is willing to scour the Earth looking for a reliable supply of REEs showcases the importance it places on these materials.

In January 2022, lawmakers introduced legislation to force defense contractors to stop buying REEs from China by 2026. Crucially, it proposes to use the Pentagon to create a stockpile of these materials.

As I told you in my previous essay, the U.S. military is wholly dependent on REEs for some of its most sophisticated military equipment. They are used in guidance systems, drones, anti-missile systems, radars, and fighter jets.

And crucially, there’s no substitute for them.

So, the idea is to use the Pentagon’s purchases of billions of dollars’ worth of military equipment as leverage to require defense contractors to support the revival of U.S. rare earths production.

As well as that, the Bipartisan Infrastructure Law earmarks hundreds of millions of dollars specifically for REEs.

There’s $140 million for a demonstration project for domestic production of rare earths.

And $320 million has been allocated to the Earth Mapping Resources Initiative. That’s a federal program to identify undiscovered critical mineral resources (including REEs).

Here’s the bottom line. America knows it needs REEs as building blocks for advanced tech and military equipment. But it doesn’t want to rely on China. So it’s backing the U.S. mining industry.

So, how can you benefit?

You can consider investing in the VanEck Rare Earth/Strategic Metals ETF (REMX) to position yourself to benefit from the overall growing need for rare earths worldwide.

The fund holds companies involved in producing, refining, and recycling rare earth and strategic metals and minerals. So, it gives you broad exposure to the REE industry.