This weekend, Dan Denning, Bill’s right-hand man at The Bonner-Denning Letter, explains why your savings are not safe right now.

A “pre-incident indicator” for inflation is flashing a warning… And the feds’ emergency defense mechanism has been activated.

All of this means that the cash Americans have been hoarding this year is in danger. Read on below for more details…

Things can always get even MORE extreme. Or, the crisis that we’ve been in since 2008 could accelerate again and take a new direction.

What should we do in advance?

When the pandemic first hit American shores in March, we revised our asset allocation model. We eliminated “bonds” and increased our “cash” position. Recently, we’ve been reviewing that position behind the scenes…

With low (and negative) interest rates imposed – as a form of “financial repression” – by the Federal Reserve and other central banks, it’s hard to see how bonds fit into a long-term wealth preservation strategy right now. (Select corporate bonds may be an exception, but this is beyond the scope of today’s discussion.)

Spain’s 10-year government bonds recently traded at a 0% yield for the first time ever. Portugal’s 10-year yield even went negative. And Portugal’s government had a debt-to-GDP ratio of 137%. The European Central Bank reiterated its promise to support the bond market (and kill European banks) with MORE stimulus.

But check out the chart below. It’s a big “pre-incident indicator” for inflation. 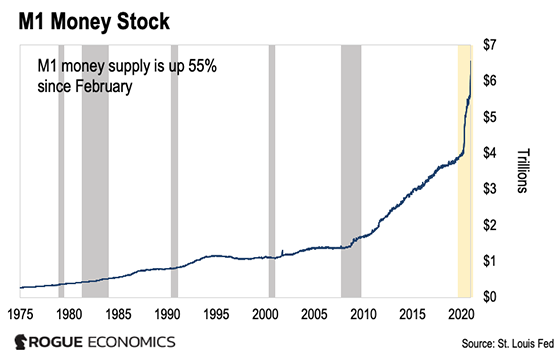 Money supply is exploding like one of Elon Musk’s rockets. M1 is a narrower definition of the nation’s money supply than M2. M1 is demand deposits (checkable), cash, and traveler’s checks. M2 is all of those, plus CDs, money market funds, and savings deposits.

M2 is growing at an annual rate of around 25%. M1 is growing even faster.

But what does that mean?

For starters, it means that 35% of all the U.S. dollars in existence have been printed in the last 10 months, according to Northman Trader founder Sven Henrich. The latest spike was almost half a trillion in late November.

What on Earth for?

At the top end of the market, the Federal Reserve is pumping cash so deposit-taking institutions (mostly banks) can increase reserves.

You do that if you need to shore up the balance sheet before the end of the year to meet capital requirements. Or you do it because you think there’s going to be a crisis and the extra cash might be handy.

We’ll know soon enough which it is. It’s likely a combination of both.

But the crisis the banks might be preparing for (for example, a “no deal” Brexit) is also a crisis for people who have money in the bank. And that’s the important question: Why are ordinary Americans hoarding cash?

The obvious answer is that we have a global pandemic, with widespread unemployment and erratic government regulations shutting down the economy.

The cash is an emergency defense mechanism. It’s what you do when you sense something’s not right, when something wicked this way comes.

Bill, our colleague Tom Dyson, and I believe that wicked thing is inflation. The huge surge in M1 and M2 is the leading edge of inflation (or U.S. dollar devaluation). And that means a large cash position could be a liability.

Our challenge, then, is to figure out how to put this cash to better use at a time when there is $18 trillion worth of negative-yielding bonds.

And stocks are at all-time highs. It all feels very much like 2000. This time around, the hot companies have real earnings. And they have a story behind them, too… that the changes in the world of work and living (both done remotely) favor companies who can take advantage of it.

But the valuations? The valuations don’t make any sense, unless you think growth is going to take off in 2021, when the lockdowns end and the vaccine is mandatory.

If you DON’T think that, it’s not as simple as rotating out of growth stocks into value stocks. You need to have a strategy for what kind of company can produce income safely in a world drowning in debt.

Bill, Tom, and I have a plan. We’ve come at it in different ways. But the idea is the same: to find assets that safely generate income… without exposing you to the risk of a “big loss” of your capital.

It’s not an easy challenge to solve. But we’ll be sharing our best answers in The Bonner Denning Letter over the next few months.

P.S. When people begin to sense that government spending is out of control, the debt is too large, and the only way out is MORE money-printing… that’s when the exodus out of cash will turn into a panic.

You want to act before that happens. But act how? That’s what we hope to answer in The Bonner-Denning Letter. Subscribe now to get all the details of our strategy.