CORPORATE APARTMENT, BALTIMORE – As I’ve warned you many times in these Postcards, the United States government is preparing to default on its obligations.

This is a HUGE insight because it’ll determine the primary investment trends in the markets for YEARS to come.

You must get on the right side of these trends now if you’re going to preserve your money and wealth. (Hint: Most investors are not positioned for these trends, at all. They own stocks and bonds. They’re going to get boiled alive over the next few years.)

But don’t take my word for it. The people in charge – including the president himself – are telling us what they’re planning to do in language that’s so clear, they might as well be ringing a bell…

Living on the Fringe

My family and I are modern American gypsies, living on the fringe of society. We have no home, no neighbors, no possessions. I don’t have a “job,” and the kids don’t go to school. We don’t even have health insurance.

We just drift from place to place, dragging our little suitcase behind us. In the last two years, we’ve been to 30 countries and slept in more than 150 beds…

Right now we’re in Baltimore. We’re squatting in an empty apartment that’s been loaned to us.

We’re going to rest here for a while… and show the kids the city. We’ll go to Philadelphia… and Washington, D.C. Then we’ll go somewhere else… probably Argentina… where it’s cheap and the living’s good. We can teach the kids Spanish.

Why do we live like this? We feel comfortable… and free.

Here in Baltimore, the kids are so happy to have a place to rest for more than a night or two. And for the first time in two years, they have toys. Here’s Penny reunited with her dolls… 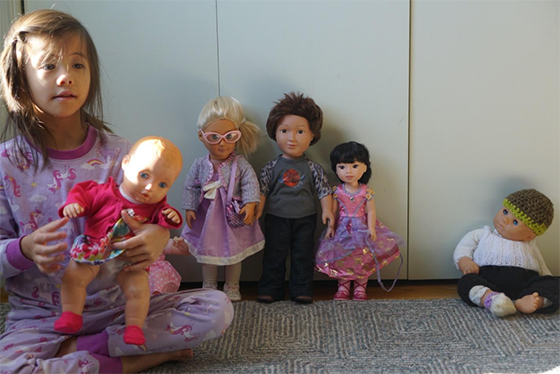 Penny and her dolls, reunited after two years on the road

Can’t Get Clearer Than This

The custodians of the world financial system have been telling us in plain language about the default that lies ahead. Trump has been calling for lower interest rates and a weaker dollar on Twitter. Translation: They’re going to devalue the dollar.

Christine Lagarde, head of the European Central Bank, called for more government spending in her maiden speech. Translation: They want to stoke inflation and devalue the euro.

Mark Carney, head of the Bank of England, has been promoting the idea of a new form of reserve currency built around crypto. Translation: They’re exploring alternatives beyond the soon-to-be watered-down dollar.

And this weekend, they were ringing the bell again…

How does the Fed buy trillions of government bonds to control the entire yield curve?

By printing money, of course!

As I said in my postcard from November 20:

Bonds [like stocks] will also be dead money over the next decade. But I don’t expect bonds to crash and I certainly wouldn’t bet against bonds.

The Fed will print money. If necessary, it will nationalize the entire yield curve like it did in WWII, or like Japan is doing now. They call this “curve control.”

Like I said back then, they’ve done this before – during WWII. I knew they’d raise this idea again sooner or later.

It’s the reason I’m not interested in shorting government bonds, even though the government has entered default…

Because the government – which is borrowing extraordinary amounts of money – was not able to borrow what it needed at prevailing interest rates. Rates spiked and the Fed had to intervene.

Since then, the Fed has printed nearly 500 billion additional fake dollars.

This is just the beginning. The Fed is going to be enabling the government’s gargantuan borrowing requirements for years to come… and not just at the short-term interest rates. Soon they’ll have to control 2-year, 5-year, 10-year, and 30-year interest rates, too. Curve control.

If there’s any sort of recession or economic slowdown, it’ll happen sooner. Because a recession will cause the government to borrow far more money than it is even today.

Here’s the chart of the Fed’s balance sheet today. It’s currently at $4.2 trillion… 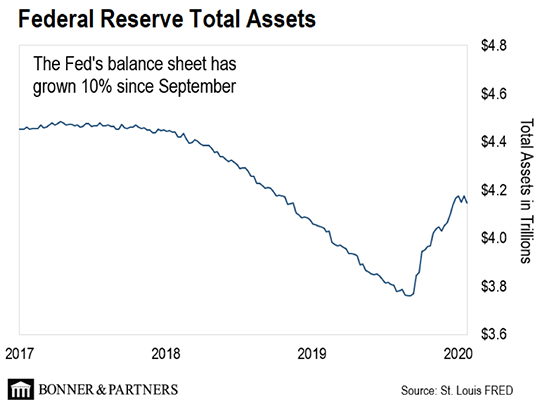 The upward reversal in the chart shows when the default – and the Fed’s bailout – began.

If I’m right about all this… and I think I am, because the president and the central bankers keep signaling exactly what’s coming… gold is going to keep rising.

Gold is hard money. And hard money is the only way to avoid getting boiled by the government’s default over the next decade.

Kate and I have already put everything we own into gold and silver. But now, I’m considering buying call options on gold.

P.S. When a borrower can’t pay back its debts and refuses to pay, that’s called a “hard” default. The U.S. government will not “hard” default. It will “soft” default by paying its obligations in watered-down dollars.

There won’t be any dramatic press releases or conferences to announce this. Most people won’t even realize it’s happened. They’ll just notice their cost of living is rising rather quickly. They may even notice gold and silver ads on television, but otherwise it’ll be a very stealthy default…

Gold is on readers’ minds today…

Reader comment: I understand your philosophy on gold, and I happen to agree with you, having done so myself, way too early, but I would like you to discuss how us retirees get our retirement income over the next 10 years while holding 100% of our investable assets in gold.

I personally hold 40% in physical gold & silver, 20% in defensible sectors like pipelines, 20% in gold & silver equities as leverage to the physical metals, and 20% in a dividend-paying energy sector.

Please consider a discussion on retirement income over the next 10 years while holding 100% of our investable assets in physical gold & silver.

Reader question: As I understand it, if we have a full-blown recession/deflation, then the stocks and gold will go down. This is due to a margin call where investors have to liquidate their gold for cash to pay debts.

Gold usually goes up if there’s inflation, stocks are going up, and the economy is doing great. Also, gold goes up during fear factors, such as war declared between two big countries, etc. So, I don’t understand how a recession and deflation can help gold go up.

Tom’s comment: I answered this question yesterday. I understand your argument, and I used to make similar arguments myself. But I’ve given up trying to predict the twists and turns that gold, the dollar, and the stock market will make as the valuations bear market unfolds.

I just want to sit quietly on the sidelines in gold and wait for stocks to get cheap again, indicated by a Dow-to-Gold ratio below 5.

Mine is a very simple stock market timing strategy, not a specific bet on future geopolitical and economic trends I’m predicting. I don’t even know if gold will go up. My bet is that gold performs better than stocks. Simple as that.

(As always, please keep writing us at [email protected]. Kate and I read every note you send us, and we love getting your messages.)