A CABIN IN THE WOODS, MINNESOTA – I started a business in 2010. Then I got depressed and stopped working. In 2018, I received a lump sum buyout for my share of the business.

Kate and I put the entire amount into gold and silver. A couple of months ago, I sold some of the gold and bought shares in oil tanker companies.

In this essay, I’ll explain why I did that.

And I’ll explain why – even though my shares have quickly fallen over 30%, and I’ve lost an uncomfortable amount of money – I’m sticking doggedly with the idea.

Greetings from our cabin in the woods…

For the last eight weeks, we’ve been driving around America, sleeping in a tent, eating fast food from drive-thrus, and washing in public bathrooms.

We started in Florida. We’re now in Minnesota. Soon we’ll be in Yellowstone Park. After that, we go to Canada.

After Canada, who knows? We have no home to go back to… so we’ll probably keep wandering the Earth until we find somewhere we like…

Last week, we took a well-deserved break at a cabin in the woods in Minnesota. This week, we’re hitting the road again.

What did we do this weekend to celebrate the Fourth of July?

We picked up sticks and branches around the cabin. (There was a strong storm here last week.)

We jumped on the trampoline, I talked on the phone to some friends, and we watched some movies.

For food, we ate bagels, chips and salsa, and microwavable breakfast sandwiches. Here we are…

A Feast or Famine Business

This is my two-minute explanation of how the tanker industry works. It’s a bit simplistic, but you’ll get the idea…

Have you ever tried to book an Uber during peak hours… and they’ve increased their prices to “surge” pricing that’s two or three times the normal price?

Think of oil tankers as Uber drivers, cruising the oceans looking for cargoes. (As I said, this is a simplistic explanation.)

Most of the time, there are too many ships. Vessels outnumber cargoes and the shippers struggle hard to make a living.

As I’ve said many times, oil shipping – like Uber driving – is NOT a good business. It’s a low-margin, inconsistent, capital-intensive business where you’re lucky if you can grind out a profit most years.

I’ve heard someone say that tankers lose money in seven out of 10 years, on average.

But here’s the thing… Occasionally you get these awesome “surges” in freight rates because there aren’t enough ships for the cargoes, and shippers panic to secure a vessel.

They pay stratospheric rates for moving their cargoes.

These surges are always temporary and are usually caused by something that limits supply – that is, the number of ships plying the sea. (The demand for shipping oil cargoes has been pretty consistent over the years.)

For example, in September 2019, President Trump put sanctions on Cosco, a Chinese shipper. It caused a panic in the industry. For a while, nobody would touch any tanker connected with Cosco.

World crude oil consumption dropped 20% all of a sudden, and oil producers had nowhere to store the oil they’d just pumped out of the ground.

The excess oil went into about 150 oil tankers anchored in various ports around the world. Suddenly, there weren’t enough ships for transporting oil. Rates spiked again to over $200,000 a day. 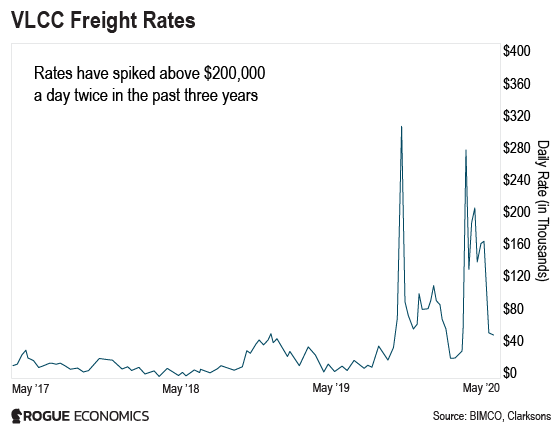 One of these surges in the tanker business can make up for years of losses. A few of them in a row can make shipping investors rich.

As a shipping investor, your job is to capture these “surge” periods and avoid the “lull” periods.

How do you do that?

P.S. Here’s the next episode of the Dyson Family Ramble Videos, where we answer some of the questions you’ve sent in…

Readers weigh in on the June 29 postcard – where Cumberland, Wisconsin local Mark said “manufacturing will never come back to America,” and Tom explained the reasoning behind his cheap pop-up camper…

Reader comment: We’ve been to China and back with our manufacturing. We were able to reduce manufacturing costs through automation and in a large part through 3D printing. Much is now done in the U.S. Some of the mundane tasks are still outsourced to Mexico, but overseen by an engineering firm in San Diego.

The stories of quality and IP were crazy in China. We may never manufacture entirely in the U.S., but China is not the answer. Your friend should “cut bait” and find a different solution.

I love following your travels. P.S. Best tasting fish in the world is fresh walleye. Hopefully you get to try that.

Tom’s response: We went fishing last week and caught five walleye. We deep fried it in breadcrumbs, and it was the best fish I’ve ever eaten. Period. Here we are enjoying our fried walleye the following day…

Reader comment: Enjoy the postcards. I would strongly disagree with reader Mark about manufacturing never coming back to America. I’ve been in the metal machining business for 48 years and owned my business for 43 years. We are going strong. Not getting rich by any stretch of the imagination, but doing ok.

It requires long, hard hours and the pay has not kept up with where it should be for my guys, but we persevere. We started off competing with three states in the Midwest and now compete with countries all over the world, the latest being India. The one link the competitors have is that they have governments that support manufacturing.

The real issue I see is that our government – at all levels – thinks it can tax America to greatness. That leaves very little money left for most people to even buy the stuff they need, let alone the stuff they want. That, and the fact that manufacturing is looked at as being evil in this country, and you are looked down on if you use your hands to make a living.

Reader comment: I love the camper and that you are pathologically cheap. That’s one quality of the wealthy, like my stepfather. I could never be in a camper as a single mom with two tall teenage boys! Ugh. I love the camper, though, as it looks easier to drive than one of those long RVs. Also more discreet!

Minnesota is awesome. Love the rugged cabin. You are all blessed to have friends and strangers offering places to stay and roam.

Reader question: How did – or would – you convince your family (mainly your better half) from the idea to get out of or escape the system and travel around the world to enjoy life and feel freedom again? (Hope it’s not too personal.)

We love the idea and are not brave enough yet, but hope we will be someday soon 😉 Please consider answering in video format. Would love to show it to my wife…

Tom’s response: Nobody had to convince anybody. The whole thing was a big accident. One day we were a divorced couple, living completely domesticated lives in Florida like everyone else. The next, we were sitting next to each other in a van, the kids behind. And we were setting off on a road trip.

As I write to you, we’ve been traveling for over two years now, 30 countries, and we still haven’t been “home.” We probably never will… Life has changed so much for us…

Reader comment: You are informative, funny, and of course, witty. I try not to miss a single postcard. When I do, I enjoy the past issues button. Thanks and keep up the good work.

Reader comment: I am enjoying your daily postcards and, especially, the short videos. Everything is so authentic, which is very difficult to find these days. Thank you for your work.

Tom’s note: Thanks for all the kind comments! As always, please keep writing us at [email protected].