MAMARONECK, NEW YORK – Why is the stock market at all-time highs?

Is it because the U.S. is more prosperous than ever before?

Is it because America leads the world in technology and has the mightiest military?

Is it because business is good and American companies are making record profits?

My family and I are visiting Grandpa for six weeks.

Grandpa is 74 years old, he has cancer (two types), and Parkinson’s Disease. He’s currently having chemotherapy and he’s about to start a course of radiation.

I’m afraid he won’t be around much longer. I hear a clock ticking…

Things are probably not as bad as I fear. (As Kate often says, fear is a liar.)

I’m extra sensitive to my fears right now, though. My mother just died unexpectedly — also from Parkinson’s Disease. And I regret how I took her health for granted in her final years.

Either way, we can’t go wrong spending too much time with Grandpa.

We hadn’t seen him since the pandemic arrived, and we’re having a great time holed up together in his little apartment…

Grandpa has the best collection of toys. I showed you his model train set last week.

Today we’re playing with his Meccano set, which is about 70 years old.

Meccano is a toy for building mechanical devices made of metal plates, gears, screws, axles, and pulleys. It was invented in 1898 in Liverpool.

Grandpa also has a collection of toy soldiers, which once belonged to his father. They’re made of lead, and they’re over 100 years old.

Back to the record stock market averages…

The chart below will be in textbooks 100 years from now.

It’s a perfect example of how central planners experimented with interest rates and caused massive distortions in the economy, which led to the end of the 20th century’s monetary system. 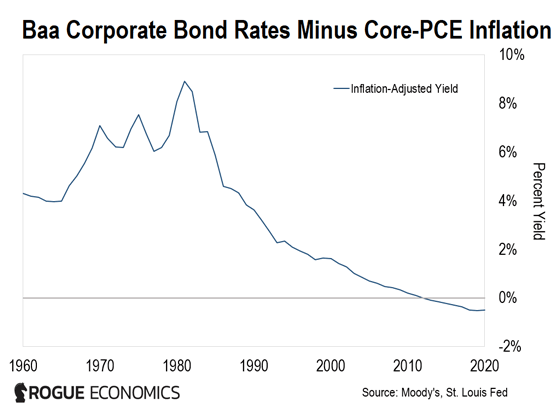 As you can see, interest rates are lower than they’ve ever been, going back 80 years.

Of course not. What is the equity value of a corporation that can borrow for free, or even get paid to borrow? That’s what low or negative interests do, in a nutshell.

Say a corporation can borrow at zero and invest in its operations at 3% returns on investment. All else being equal, it should maximize this opportunity.

Or say a corporation borrows at zero and then buys back its stock. Again, it’s a no-brainer way to increase profits (as long as rates don’t rise), and corporate treasurers should maximize the trade.

Both these dynamics hyperinflate profits, growth, and equity valuations.

In theory, with zero or even negative interest rates, equity valuations should be infinity. Or at least, they should have the highest valuations in history – which they do.

In other words, the record highs of the stock market averages have little to do with great business conditions or military dominance. This 40-year boom in profits and valuations is based on the financial incentive of falling interest rates.

History will show we’re in the final act of the greatest boom in credit and debt in history.

American businesses have already squeezed every penny of profit and growth from the trend, and the tailwind of falling rates is over. We are now entering a long period of economic stagnation and entropy… And the political response to this will be currency debasement and government deficit spending.

That’s why, as regular readers know, we’ve moved to the sidelines in physical gold and silver. And we’ve invested in certain recession-proof industrial infrastructure plays, to earn a little income.

It’s the only way to protect our wealth as the greatest boom in history ends.

P.S. For more on my favorite recession-proof plays, check out this video. I explain the best ways I know to earn a little extra income… as well as why I went nearly “all in” on gold in 2018.

Reader comment: What a great addition to the schooling learning electricity basics with “Grandpa.” Thought you would have titled your tome “An Englishman in New York” though. But then, maybe there are copyright issues. Welcome back to the “good ole USA!”

Another reader relates to Tom’s journey without a smartphone…

Reader comment: I’ve enjoyed reading your Postcards since you began writing them. I’ve enjoyed going along on your journey around the world with your family. I encourage you, as others have, to please keep writing the Postcards. I know many people that feel they can’t get along in life without a smartphone. I walk every evening and see other walkers on their phones as they walk. I walk for exercise and to have some quiet thinking time.

Quiet time seems to be in short supply these days. I’m one of the few that has never owned a smartphone. Yes, I admit I’m considered a dinosaur in the tech world. I’ve never used an app or sent a text message. I keep a flip phone with me when I’m out of the house, but use it only for “phone calls” and taking a few pictures.

Meanwhile, other readers share their appreciation for Postcards and offer Tom a place to stay in Wyoming…

Reader comment: Thanks for all the hard work you put into writing Postcards from the Fringe. Although I own gold in many forms, I’m not a true believer in it as a good investment. I look upon it as a form of insurance.

Thanks for all your thoughts and good ideas and best wishes to your family.

Reader comment: Enjoy your Postcards. My wife and I now live in Laramie, Wyoming, so if you are on your way back from Idaho and need a place to stay, call us. We are renting an 1891 Historic Mansion in Laramie, and we have plenty of room.

Tom’s note: Thanks for writing in! As always, please keep your questions and comments coming at [email protected]. I’ll answer as many as I can in a future Friday mailbag edition.