ATLANTA, GEORGIA – Manufactured goods and energy. These are the two most important sea-borne commodities on the planet.

Washington wants both of these products to be expensive. Why? More below…

Best Way to Meet Other Families on the Road

Another day, another campground…

I’m writing to you from Stone Mountain campgrounds, outside Atlanta. The family in the campsite next to ours is local, from Atlanta.

We made friends. Our kids have been playing freeze tag together. And throwing a football. Then an hour ago, another family, from another campsite nearby, offered to let us use their stand-up paddle boards.

If there’s a better way to meet local families, I don’t know it.

Every new campsite we stay at, we meet other families with kids… and everyone ends up playing together. Often there’s a river or a pool. And there’s always a forest…

We’ve only been living in campgrounds for two weeks. But we’ve already made so many new friends.

Here we are roasting marshmallows with the family from Atlanta… 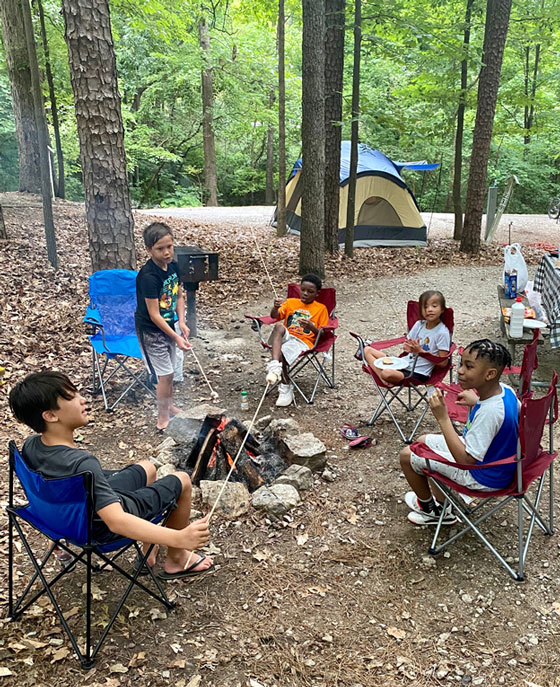 Dusty, Miles, and Penny with our new Atlanta friends

Back to the international economic system…

War on the Dollar System

Expensive oil and expensive imported goods would seem – on the surface – to be a bad thing for American consumers. I’ve even heard rising oil prices described as a tax.

So why would Washington want the oil price and the international price of manufactured goods to be high?

The obvious answer is, because the government wants to protect jobs in the U.S. oil and gas industry and the U.S. manufacturing industry.

There are two other reasons few people discuss but, in my opinion, are more important…

In March, we saw Putin and the crown prince of Saudi Arabia, MBS, wage war on this system by dumping oil and sending the oil price negative.

Somehow, Trump convinced Putin and the Saudis to back off this oil war and let the oil price rise. (It’s rumored he threatened to pull America’s military support for the Saudi regime.)

Oil prices are now back above $30 a barrel and the threat to Washington has eased for now.

But are we about to see China open a second front in this “financial” war on the dollar system by devaluing the yuan and sending the price of manufactured goods lower, as the Saudis and Russians conspired to do with oil?

The chart below suggests we might. It shows the exchange rate between the dollar and the Chinese currency, the yuan… 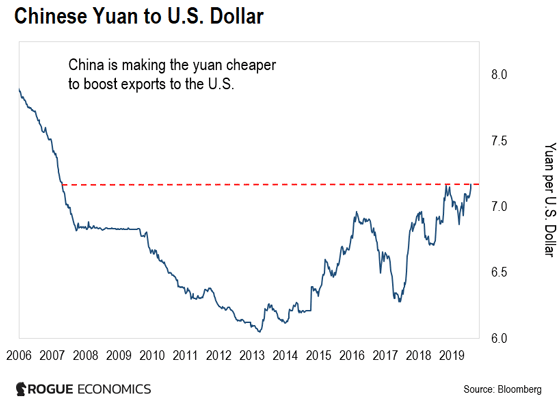 When the yuan falls against the dollar – as indicated by the line in this chart rising – it’s sort of the equivalent of China “dumping” manufactured goods on the world market to suppress prices, much like Russia and Saudi Arabia did in March.

As the chart above shows, the yuan is about to break out to new 15-year lows.

If the yuan does break out to new lows against the dollar, expect an acute diplomatic crisis between the U.S. and China… more Federal Reserve money-printing… and possibly even a period of competitive currency devaluations.

Reader question: Curious if you have any thoughts on how long it might take for gold to get into that $10,000 neighborhood?

Tom’s response: I am mentally preparing for it to take 10 years. But given that the ratio has fallen from 22 to 13 in less than a year, I would not be surprised if it reached 5 much earlier than 10 years.

Reader comment: I am curious what you think things will look like, especially an all-in gold portfolio, if the Dow-to-Gold ratio does get down to about 2-3?

I imagine the Dow-to-Gold ratio WILL fall considerably below 5. In other words, I am anticipating a historic stock market crash and bear market (relative to gold). This will go down in the history books alongside the 90% decline (relative to gold) in the Dow between 1929 and 1932.

Reader question: How can we keep up with the Dow-to-Gold ratio? Thank you so much for your new advisory service. As a partner since the Palm Beach Research Group days, I loved the Income for Life idea (I have two policies).

Reader question: If one were to own 10 ounces in gold bars, how would he/she sell them? What are the obstacles in selling gold?

Tom’s response: It’s very easy. First, look up the price of gold on the Internet so you know exactly what your gold bars are worth. Then, contact a few gold retailers and ask them to make you an offer.

Reader comment: Have to ask… Do you think the USA has much gold? Other countries have been adding to their stockpile for years and we have no information on the USA. Thanks! So glad your family is well.

Tom’s response: According to publicly available information published on the Federal Reserve’s website, the U.S. holds approximately 8,000 tons of gold. I’ve heard theories that it doesn’t actually exist, but I’ve never paid any attention to them.

Reader question: Watched your presentation last week and thought it was honest and made a lot of good points. Do you think the government will try to block private ownership of gold? Enjoy your USA travels with your family.

Tom’s response: I do not imagine Washington will ban private ownership of gold. Gold has been exiled from the financial system for 50 years. So few people own it. Why would they care? I’d be much more worried about them commandeering our 401(k)s and forcing us to hold Treasury bonds or some other equally terrible scheme.

As always, please keep writing us at [email protected]!