KUNMING, CHINA – We see cameras everywhere… on every street corner, over every sidewalk, above every building entrance, over every train platform and bus stop…

Yesterday, I heard a man recount how he was fined for jaywalking in China. They pulled the fine straight from his bank account 20 seconds after he crossed the street. He was caught by facial recognition software.

I took this picture of cameras on our stroll in the park today. 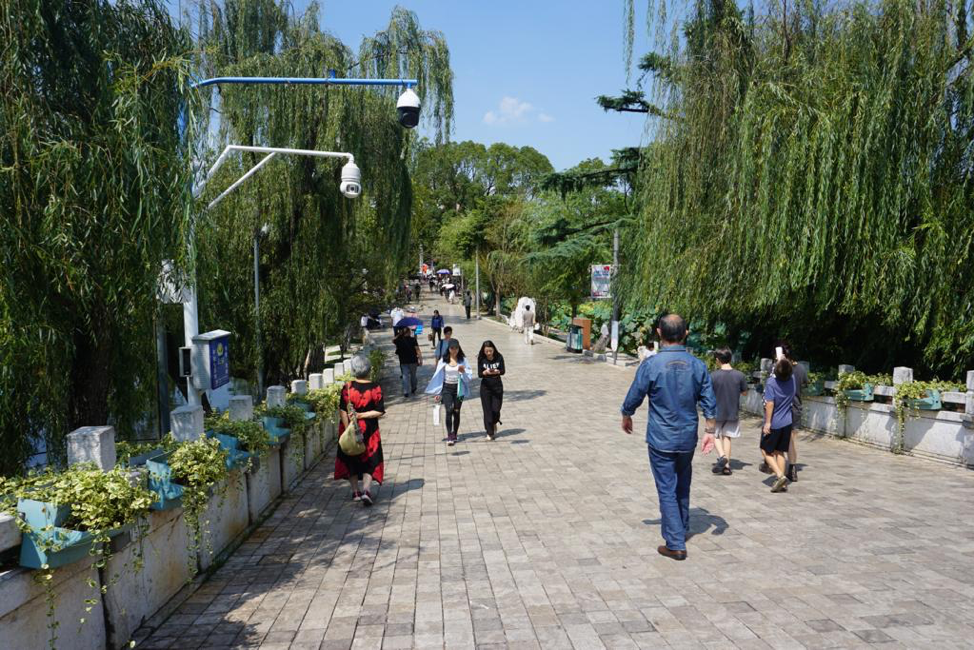 We see cameras everywhere in China

My ex-wife Kate, our three kids, and I left America over a year ago. We’ve been traveling around the world by public transport, staying in backpacker hostels. We’ve been across America, Europe, Africa, the Middle East, India, and Southeast Asia.

We’re currently in Kunming, in southern China. We’re staying in a cheap hotel ($13 a night). We do our schoolwork in the morning (Kate and I are homeschooling our kids) and a little exploring in the afternoon.

Today, we rode the subway and took a couple of city buses. Then we went for a walk in the park. Tomorrow, we catch a bullet train to Lijiang, an ancient market town with cobblestone streets in the Yunnan mountains. 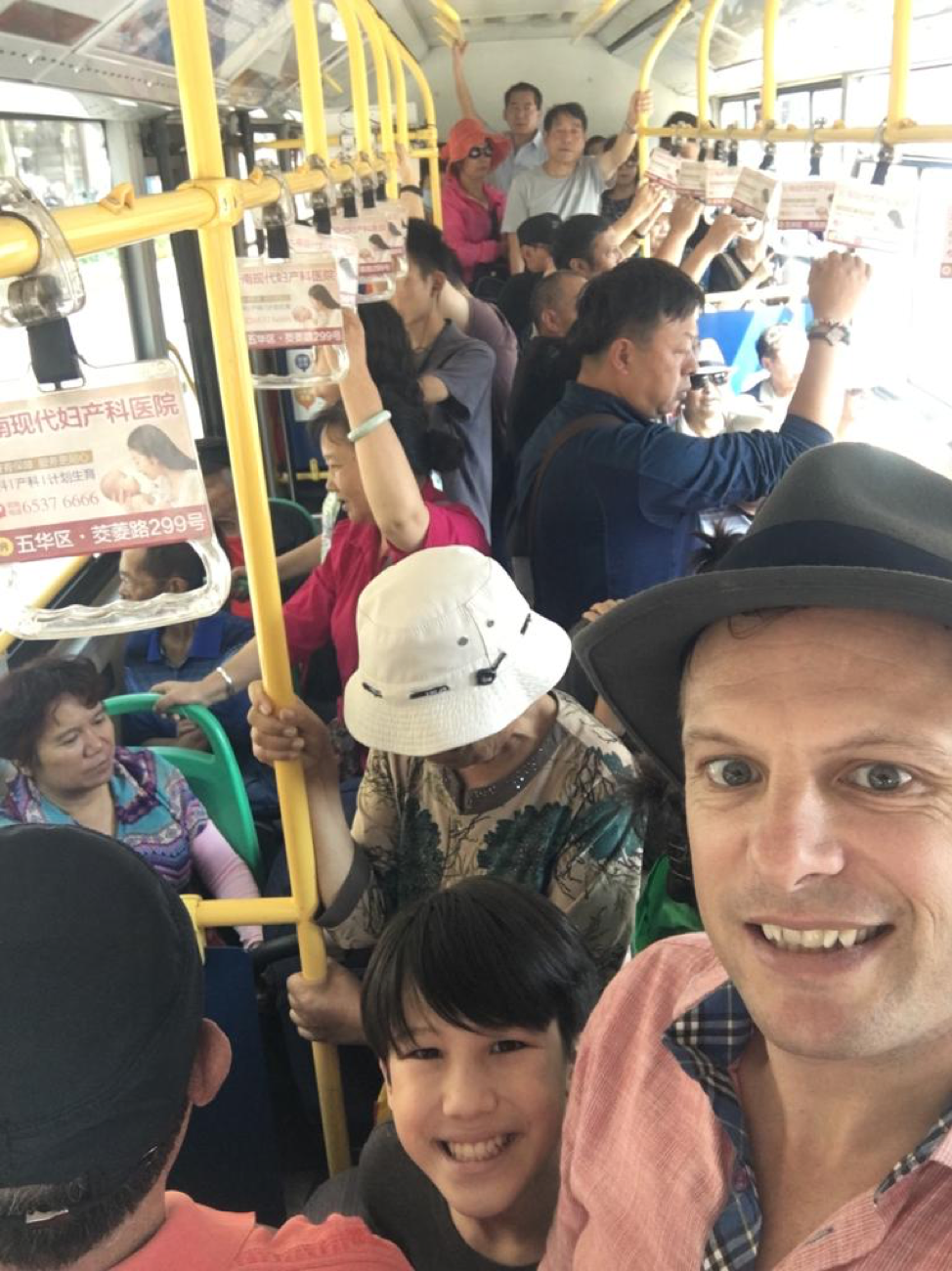 Riding the bus in Kunming, in southern China

For the last three months, I’ve been writing about the plumbing beneath the world’s financial system and how there’s a shortage of dollars in the market for very short-term loans (one- to three-day loans).

This is an important market because banks from all over the world use it to match their obligations with their assets on a minute-by-minute basis. Trillions of dollars change hands every day. I used to work on the repo desk at Citigroup, and trades measured in the billions would cross my desk.

I’ve described how the Treasury’s voracious appetite for cash (after it raised the debt ceiling) has coincided with foreigners refusing to buy Treasurys (because FX swap rates went negative), which has coincided with deflation in the eurodollar market.

You don’t need to understand any of this. All you need to know is that there aren’t enough dollars in the system, and the situation keeps getting worse.

I’ve called this a “slow-motion credit crunch.” I’ve been warning that, unless the Federal Reserve fixes it, things are going to start blowing up.

Well, the Fed hasn’t fixed it. I’m not even sure it understands what’s going on. And yesterday, ZeroHedge carried this headline:

You can see that “chaos” in the chart below. It shows the overnight repo rate, which spiked 6.4% between Friday and Tuesday. 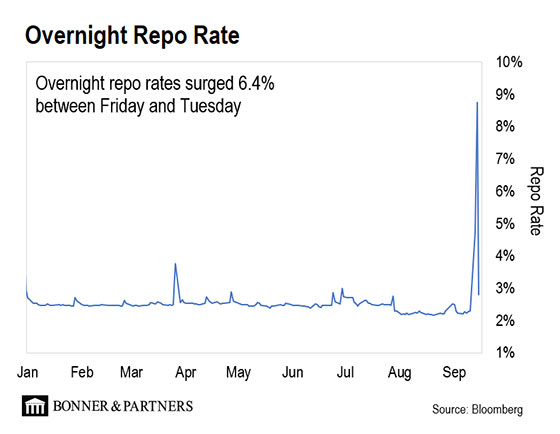 To reiterate, any moment now, the Fed is going to open the liquidity taps. If it doesn’t, things are going to start blowing up, especially in emerging markets.

P.S. We continue to be amazed how modern and prosperous this part of the world is. The subway is so bright and shiny it almost hurts the eyes. The traffic is perfectly organized. The buses don’t accept cash. There’s no honking or civil disobedience. The restaurants all have digital signage. There are big, imposing banks with long rows of ATMs everywhere you look.

I wish I could talk to the locals and ask them if there’s been any inflation in prices… or if consumer credit is popular… or how they can afford to buy apartments.

But we can’t communicate. It takes us five minutes just to buy a drink, order a meal, or get directions. We mime and point at pictures. And when we’re not getting our message across, we use our phones to translate.

P.P.S. This is in Hanoi a few days ago. The train squeezes down this little alley. It’s become a tourist attraction. Lots of cafes have sprung up next to the tracks, and you can have a coffee or a plate of spring rolls while you wait for the train. We love trains in this family (well, okay, it’s mainly Dad), so of course we had to go. Here we are getting flattened against a wall by the train… 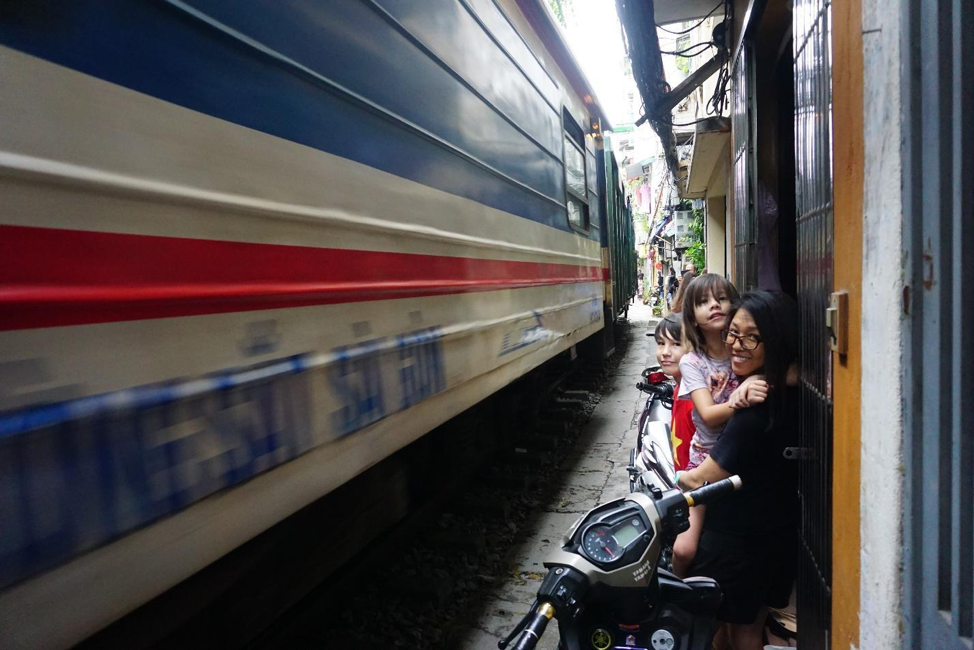 What are Chinese ghost cities?

Tom’s answer: I don’t know. I think the government says, “we need a city there,” and along come the cement trucks and cranes. The hope is, in 20 years or whatever, it’ll be a bustling metropolis. I don’t know the story of the particular city we were just in (Chenggong), but I think it revolves around turning it into a big university town. Wish we could’ve stopped there and taken some pictures…

For those of us who want exposure to gold/silver but don’t want to purchase physical gold/silver to hold on to or have stored, what are your top recommendations? Something liquid with decent volume that can be purchased easily through a TD Ameritrade, Schwab, or Vanguard account. Thanks!

Tom’s answer: Lots of options. Too many to write here. But it’s an important question because many gold ETFs (exchange-traded funds) have high expenses, and I wouldn’t recommend them. I need to do a few hours of research to give this question the answer it deserves. (Keeping in mind I can’t give individualized investment advice.)

I think physical gold is the best option. As easy as online shopping. What I love most about it is that I can’t sell it impulsively. When the time comes, I’ll have to box it up and send it back, like returning an unwanted online purchase. I can’t just “click” and sell it, like I do with stocks. It forces me to be more deliberate about my strategy.

Glad to hear that you and Kate are gluing your family back together! Marriage isn’t always easy, but it’s worth it to make it work.

I have been reading about your travels for a little while and I find them completely fascinating. Certainly your children will have a global perspective lacking in most American adults, not to mention American children.

However, I’m glad you finally clarified what for me was the gorilla in the room and explained why you were traveling the world with your ex-wife. Maybe you can describe your beautiful companion as your fiancée. For most guys experienced with a difficult marriage, being around the ex-wife runs chills down the back.

I am looking forward to your tales of nonconformity and your unconventional insights into How Things Are. Thanks for including me.

I’m so glad to be receiving your e-letter. I’ll have to read the previous posts to catch up!

I was wondering where you have been for the past year. I really enjoyed The Palm Beach Letter when you were there; your writings were awesome. I am sure I will also enjoy Postcards From the Fringe. Nice to see you back, and good luck with your traveling. Keep tight together. You have a fantastic family. All the best, amigo.

Tom, I just got the first postcard… Congratulations for taking the leap! Go see this great country and all this world has to offer. Your kids are truly lucky, as I think they will benefit immensely… and have a once-in-a-lifetime experience to boot! Look forward to your updates.

I’m writing not only to thank you for your ongoing travelogue, but also to encourage others to explore the world as you are doing. When I finished my professional education many years ago, and as others of my ilk were announcing their future work plans, I slipped away with a backpack. Much to my parents’ chagrin and against the advice of many, I accepted a work position in Australia for a year, followed by additional work and travel experiences in Thailand, Nepal, and India. Over a three-year period, both as a working professional and as a devoted traveler, I expanded my universe and cemented my values, consistently preparing myself for a life to come in America.

Now, in my “very senior” years, I look back on those experiences without an ounce of regret and with a cultured appreciation of the real world. I wouldn’t trade those years for anything, and I suspect that you and your family will ultimately feel the same. Godspeed in marriage, life, and continuing adventures.

Tom’s note: We love getting your feedback, questions, and responses to our postcards, and your messages are an integral part of this project. (I’ll never reveal your identity if I decide to republish your note.)

Write back to us at [email protected]. You can also shoot our customer service team a note here anytime.