It’s the most populated place on the planet. (There are 34 cities in China bigger than Chicago.) Yet there’s never anyone around.

Greetings from northwestern China! Today, we traveled from Zhangye to Dunhuang on the bullet train. 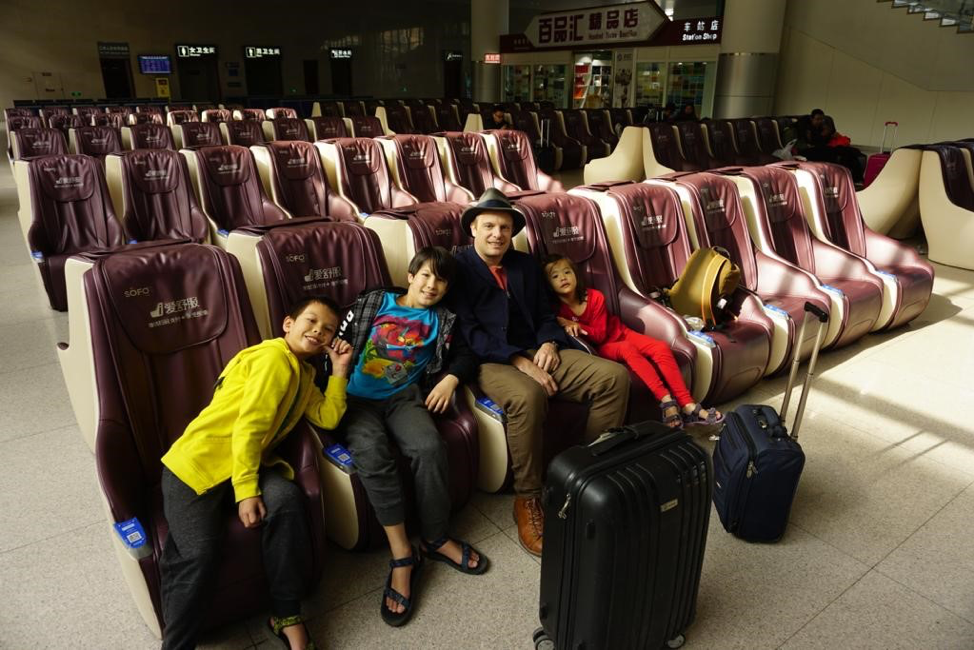 Dunhuang is a small town in the Gobi Desert and a trading post on the old Silk Road. It’s 10:37 p.m., and we’ve just arrived.

Pretty late for us, but we’re in a decent hotel (rooms cost $15 a night), the kids are asleep already, and I have time to write to you.

We’ll stay here for a few days, then get back on the road again…

Here we are boarding the train earlier today. 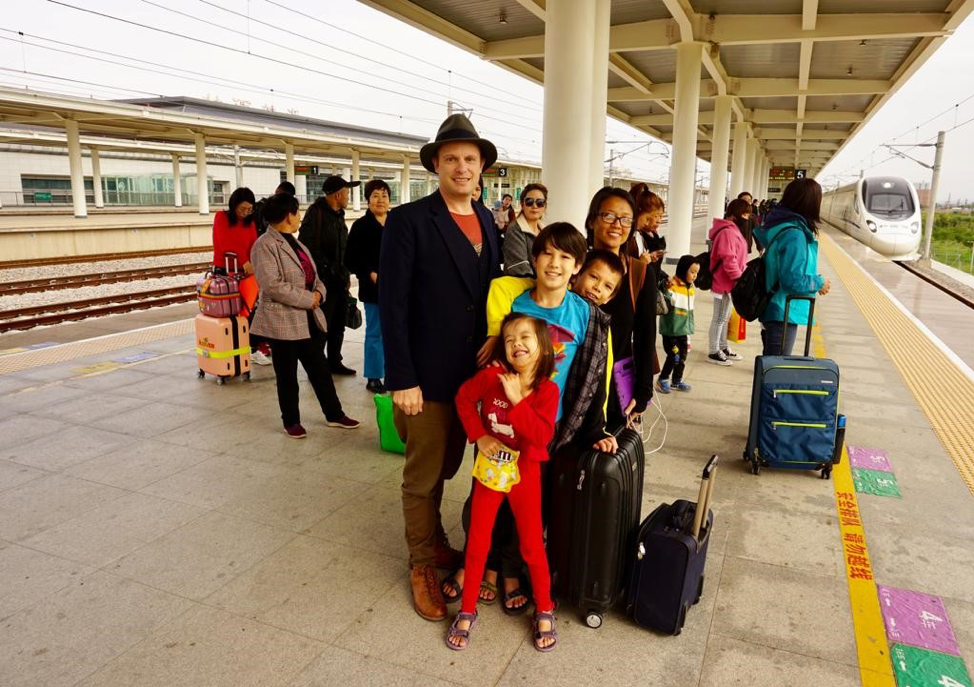 The trains always seem full. But the other day, we took a wrong turn on the platform and walked the entire length of the train to find our seats.

Half the train was empty, lights off, closed to passengers.

We’re in some of the least populated areas of China, so maybe that’s why we’re seeing all these empty seats.

Speaking of which, someone wrote in:

Do you believe, like I do, that China is building for the future… and that, as they develop a bit more, they can survive for decades to come by supplying homemade products and feeding into their incredibly large populace – just like America did 100 years ago?

This is the big question. I’m still trying to figure this out, but my preliminary feeling is no.

America developed organically, on a foundation of free markets and free capital. China is a gross experiment in inflation and centrally planned mercantilism.

China definitely “looks” wealthy… more than any other country we’ve been to outside of Western Europe and America.

People walk around in cities, toting shopping bags and Starbucks drinks, talking on their iPhones.

It’s clean and modern, and the marketing/branding campaigns are sophisticated (a sure indicator of a wealthy society).

We haven’t even been to the wealthiest regions of China yet.

But my gut feeling is, there’s a fragility underneath the growth and prosperity. And I think China is vulnerable to a recession in the West, which always shows up eventually.

I’ll have more thoughts on this as we travel around.

Reader comment: Over the years, I’ve deleted a lot of your emails. But your current communiqués are a completely different story.

Reader question: Do the Chinese people resent you? Do you feel any danger because of tariffs and current awkward relations?

Tom’s response: It’s very hard to communicate with the locals. But we haven’t felt any resentment. Definitely haven’t felt unsafe. The locals – at least in the areas we’ve been so far – have been humble, sweet, kind, and gentle. More than anywhere else in the world we’ve been to.

It’s been a reality check. I wanted to dislike the Chinese before we arrived. I had a prejudice. But they are, in general, extraordinarily charming people.

Also, there’s no haggling here. Which is such a relief after a year of constant haggling. The taxis have meters. Shops display prices. Tourist activities have set prices. (Same charge for foreigners as for locals.)

And they won’t accept tips. We always try to tip our taxi drivers and restaurant servers, but they never accept. So there’s never any conflict during transactions.

Finally, if you remember from one of our first postcards, we’ve been “treated” by random strangers twice now… one guy bought our subway tickets, another guy bought our dinner.

Reader comment: I have been fascinated by your stories. I am amazed that any modern-day person would have the courage and resolve to do what you and your obviously supportive family are doing. Not only will your children be forever more wise, tolerant, and understanding, but they will feast on these memories forever.

Reader comment: I really look forward to your updates. Please keep them coming. I am intrigued with the observations you have made about the oversupply of infrastructure in China. Look forward to your analysis of the economic implications. Best to you and your family.

Reader comment: My wife and I spent a month traveling China and Tibet in 2001. Your comments on how much construction is going on is almost word for word what I saw during our time there. It’s been 18 years! I would have thought it would be different by now. Enjoy your comments on your travels and family. Thanks for sharing.

Reader comment: I am a gold bug who has diversified all of my cash into gold, silver, and mining shares. I read with interest your observations on the massive infrastructure-building in the towns and cities, which confirms the many articles I have read.

My question is: Was or is part of the purpose of your trip to try and find a safe haven for your family, and if so, have you found it? Wishing you well and a safe journey!

Tom’s response: The trip was spontaneous. We hit the road less than three weeks after the idea first came up in conversation.

We homeschool our kids. So the primary goal was to show our kids the world… the ultimate homeschool field trip. Also, we’re divorced, so living together as a family after the trip wasn’t on the radar.

Now, we’re nearing the end of our trip. We have some decisions to make. Where will we live? What will we do? Honestly, we have no idea. Definitely haven’t found the magical safe haven…