BACKPACKER HOSTEL, EAST TOKYO – Gold is at $1,470. It’s been consolidating for three months. I like its behavior. It feels very strong to me, even in its weakness… like this is just a breather in an ongoing bull market.

I haven’t sold a gram of gold in this pullback, and I won’t. I’m not selling gold under any circumstances until the Dow-to-Gold ratio hits 5. Bill Bonner calls that 5 level the ratio’s “rendezvous with destiny.”

The Dow is at 27,821, just about at a record high. The stock market feels pretty strong too… Nothing makes it fall. The pros call this “climbing a wall of worry,” and it’s a sign of great strength.

I also like how many times the market has attempted to break higher. We saw gold do this this summer. When gold did finally break through the ceiling, it jumped $200 higher. I wouldn’t be surprised to see the stock market jump higher soon too.

We’re in Tokyo. I’m writing to you from the common area of our hostel. I write by hand, using a pencil. Later, I’ll transcribe my handwriting to my iPhone, add the photographs, and email it to you.

The boys are next to me playing Pokémon Go on our phones. It’s a treat for them. They’ve put up with so much hardship on this trip. We downloaded it for them yesterday.

Kate and Penny have gone to bed already. We’ll join them in a minute.

Our life is almost magical. Like we’ve entered a portal, and we’re in a secret dimension where there’s no school, no work, no bills, no shopping, no housework, no driving, and no meetings. Just magic. Every day.

Today we went to teamLab, a museum. You walk into a warehouse with no windows. A dark path guides you through a series of exhibitions that use light projections, sounds, smells, mirrors, water, and lights to create an “other-world” experience. It was incredible. Like entering a portal. We all loved it.

Here I am in one of the rooms… 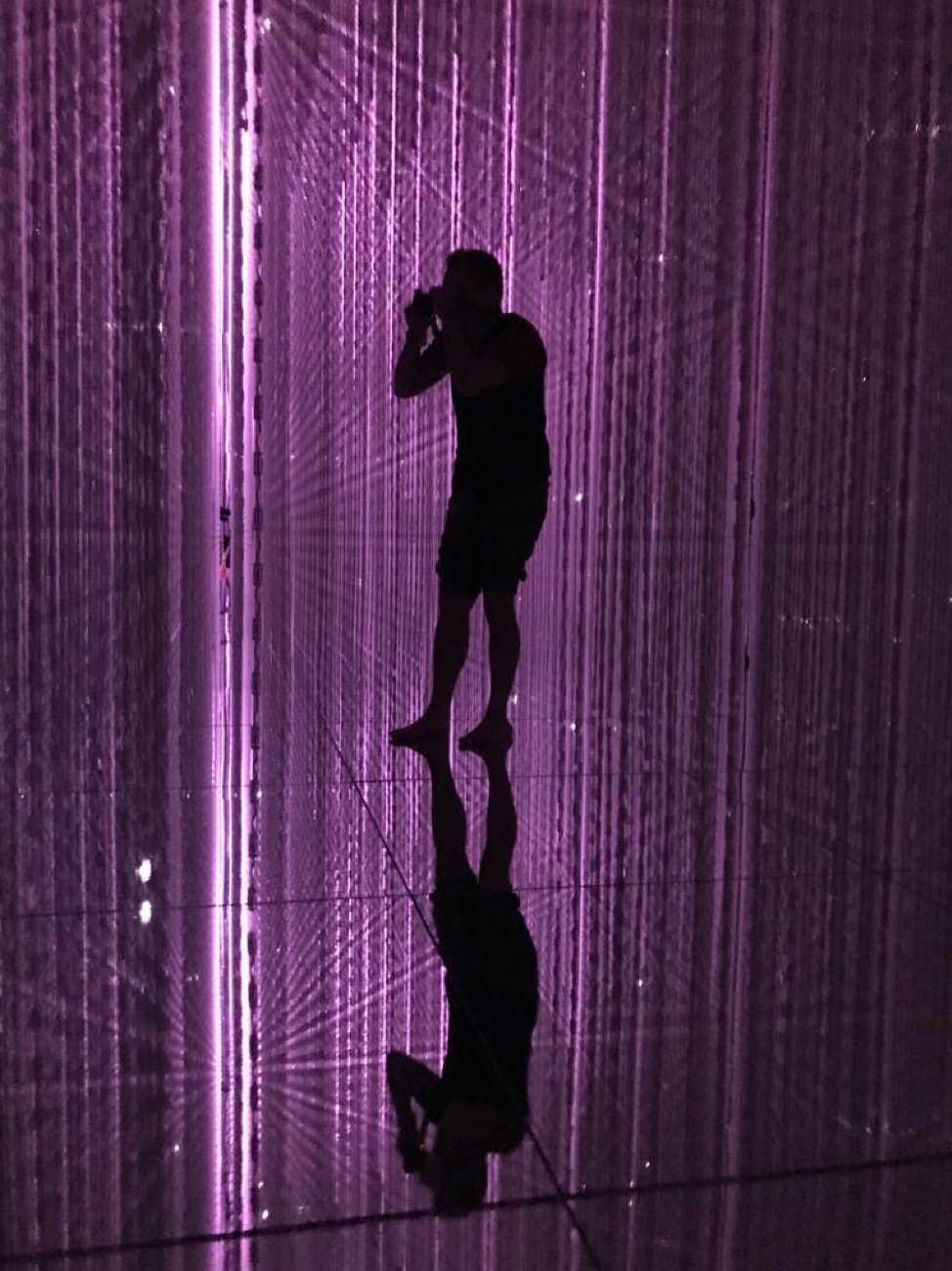 Entering an “other-world” portal at the teamLab museum

Tomorrow we board the bullet train southbound…

P.S. Here we are eating REAL ramen in Tokyo… 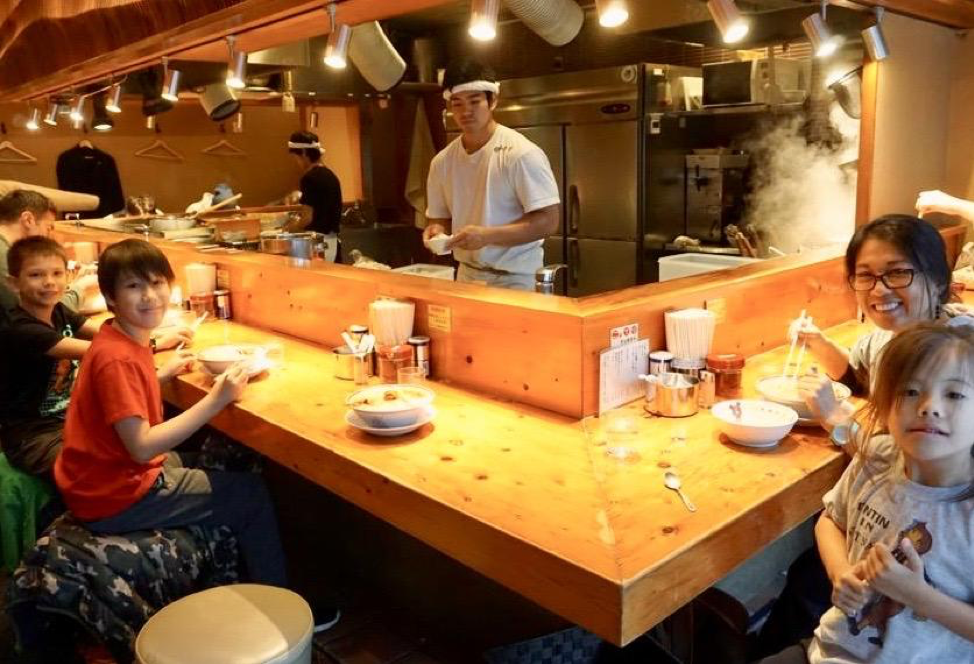 In the mailbag, appreciative fans… why Tom prefers holding gold over dollars today – even though some are calling the dollar the “best house in a bad neighborhood”… and more on Tom’s future (and past) destinations…

Reader comment: Following the Dyson Family Adventures has become an addiction in our own family. We await the next episode with much breathless anticipation, like following a serial thriller that has surprises, humor, and heartwarming humanity. You, your soon-to-be-wife-again, and your lovely kids are the truly well-cast stars of this long-running serial.

We’ll miss it when it ends. Please publish the book version for us, your appreciative fans. Thank you. (P.S. The love hotel episode is hilarious!)

Tom’s response: Thank you so much for this lovely comment. I just read it to Kate. She was very pleased. I’m hoping it’ll never end… I don’t want to go back to the conventional world. We’re having such a good time here outside the matrix.

Question from Brad Kidd: I know Bill Bonner has been raising the crash flag (continuously), and Porter Stansberry believes, as I do, that the millennials will give us a socialist administration in the very near future, so a major disruption or crash is highly likely. But I’m also a fan of Porter’s friend (and fellow surfer) Steve Sjuggerud, who thinks we will have a final melt up before going over the cliff…

Your thoughts on this would be greatly appreciated… and you can use my name… I like the press.

Tom’s response: Dear Brad, good questions. I’ve stopped paying close attention to nominal stock prices. I don’t have a strong opinion on where the stock market goes in nominal terms. But since you put me on the spot, it looks pretty strong to me, and I think there’s a good argument for stocks to rise if inflation picks up, as I’m starting to suspect it will.

I now focus my analysis on the stock market priced in gold. It’s so much easier to see the trends through the gold denominator. And in terms of gold, the stock market is clearly in a long-term bear market.

Tom’s response: A combination of all three. Plus silver, too.

Reader question: Harry Dent, the economist who has written extensively about demographics influencing investment results, thinks the dollar will still be “the best house in a bad neighborhood,” and we should hold on to those as opposed to going all-in on gold.

Tom’s response: I’m familiar with Harry Dent’s argument. I see a global synchronized devaluation of all paper money. So gold and silver will go up hundreds of percent. I also agree that the dollar will probably be one of the strongest paper currencies. But I still wouldn’t want anything to do with it. Like you say, it’s in a bad neighborhood.

Reader comment: I am a Chinese American traveling in Hong Kong as well; too bad you don’t watch more news from local TV stations. They broadcast in real-time (there is no editing) how “students” damaging public MTR [Mass Transit Railway] stations are causing the stations to shut down. Students throw petrol bombs, burning trains and causing the whole train line to stop operation.

All this chaos they create is only hurting local middle- and lower-class people. They punch and hurt people who don’t agree with them. All these “students” so-called fighting for Hong Kong’s democracy are depriving local people of freedom; now everyone has to watch where and how to travel to avoid getting into trouble. (Just like Tom ran into trouble and got teargassed).

Tom, when you were in Hong Kong, did you run into any government restrictions? Did you find any time that you didn’t enjoy the same freedom as you had in the States? Any restrictions on your web browsing or speech (as long as you’re not openly against those black characters on the streets)? You are free to do anything a law-abiding citizen can do.

All the Western media is painting HK as a bad place to be. Even U.S. senators lie about Hong Kong’s situation to give China a black eye. They keep bringing up the Tiananmen incident to relate to the current situation in Hong Kong, but you can see that since the beginning of the demonstrations in June ’til now, no one was killed by police.

Reader comment: Your description of HK reminds me of when I was stationed in Bangkok as a disease hunter with the U.S. Army… and was at ground zero for a little something called SARS. I was probably the only person rooting for it to recur the next year in Southeast Asia. Flights were empty; 5-star hotels on the beach were cheap.

I took my wife and two small children with me everywhere. It was awesome. One time, we had an entire Singapore Airlines flight to ourselves between Singapore and Malé, Maldives. I managed to get there a dozen times for work and saw the entire country from north to south. Another time, I picked up some great art in Nepal in the middle of their civil war. The shop owners were happy to see me… and I got away with a steal of great artwork.

I miss those days. Enjoy the adventure. Lifetime of memories.

Reader comment: We have had a similar experience in Bolivia, but encountered roadblocks, which disrupted travel, so we could not take tours. Could only travel between cities by air if you could get to the airport. The museums were closed. In Sucre, where we were there was no violence. Don’t get the idea that travel to places in turmoil is great. It is often not as bad as portrayed in the media, but don’t count on it.

Reader comment: So glad you are doing this. Fantastic experience for the kids. The world is almost never what it seems. Wish I did it with my kids. By the way, you and your ex look years younger than just a few months ago. I don’t think it is lighting or hairstyles, either. Just sheer joy in your eyes.

Reader question: I have thoroughly enjoyed reading your “postcards” and am quite envious of your adventure. Thank you for your insights about all the foreign destinations you have visited. I am keeping track of certain places I too would like to visit based solely upon your experience.

However, I would like to inquire as to whether you plan to visit South Korea, as that has become my No. 1 destination at the top of my bucket list. I would really be looking forward with much anticipation to your impressions of South Korea and its people and culture.

Tom’s response: Kate was born in South Korea, and we visited together 10 years ago. We loved it. We’re not going this time, though. (Kate was adopted by an American family when she was four years old, and they raised her in Florida. She’s never been in contact with her biological family.)

Reader question: I have been following your postcards for weeks with great interest. Just wondering why you only go to huge, fake, polluted cities? Why don’t you show your family the real nature, like on the Pacific Islands, or on your way back, the Russian Kamchatka, with the volcanoes. Just a stimulation, so your journey does not get too one-sided!

Tom’s response: We hate big cities. Harder to get around, more expensive, harder to find accommodation, more crowded, etc. We’ve gone to great lengths to avoid them over the past 18 months. Sometimes you can’t help it, though. The big cities have the big airports and train stations.

Reader comment: I’ve been binge-reading all your postcards. Though I am a Bonner & Partners lifetime member, I have information overload and didn’t come across the postcards until recently. It seems you started writing and publishing them regularly back in June. You were already in India by then. My question is: Do you have any writings to share from the earlier places you visited on your ’round-the-world odyssey?

I agree that physical gold: a) Is a great place to wait out the current madness of “the system.” And the Dow-to-Gold ratio gives you a great road map. And b) Has the added benefit that, as a form of savings, it “sticks” to the hands. It’s hard to spend or cash in physical gold. I have lots of it for these reasons.

But… I’m also ALREADY buying great dividend-paying stocks OUTSIDE of the USA. There are places in the world where the “valuations bear market” you refer to appears to have perhaps already reached a bottom. That’s where I’m going in. Maybe I should do a series of “Country XYZ Benchmark Stock Index” to “Gold in Country XYZ Currency” ratio charts to see what they show…

I have a portfolio that yields between 12% and 14%. It can be done. There is some country risk and currency risk, to be sure. But I can live with that. I feel I am being adequately compensated for it. Good luck on the next leg of your journey in Japan.

Tom’s response: Thank you for this idea. It’s a good one. I’ll look into it when the trip is over. I started writing these postcards in May. Before that, social media was the only place I posted…

Please keep writing us at [email protected]. Kate and I read every note you send us.