The latest statistics on foreign holdings of U.S. government debt came out this week.

Holdings fell by the most in two years. And demand for purchasing new debt was the lowest in over TEN YEARS. More below…

Greetings from Tokyo. First day in a new country. Always interesting. We never plan ahead, so I’m scrambling to learn about Tokyo and find things for us to do here.

We’re staying in another bunk-bed hostel. We’re paying $45 a night.

Japan will be the last country we explore on this trip. It’s also the one the kids have been looking forward to the most because they love Pokémon. So we’ll be doing some Pokémon tourism this month.

Today, we visited one of the Pokémon Centers in Tokyo. To me, it looked like any other store filled with expensive stuffed animals. But the kids were happy. And they’ve earned a special treat after all they’ve put up with over the last 18 months.

Here they are in the Pokémon Center this afternoon… 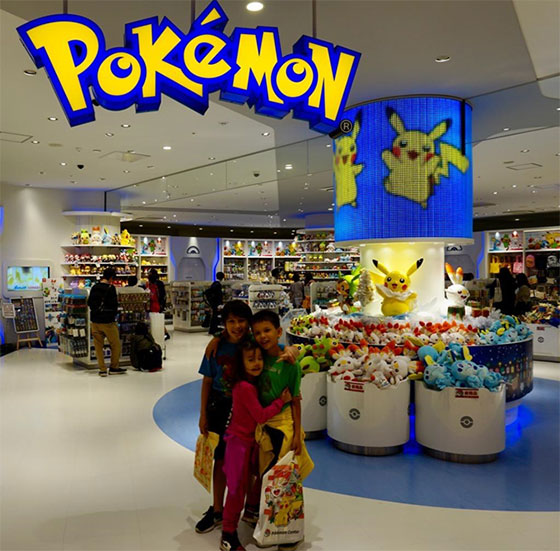 We took Dusty, Miles, and Penny to the Pokémon Center today.
They’ve earned it

We bought Japan Rail passes, so we’re going to travel around Japan by train over the next three weeks.

They cost $2,000 for the family for 21 days. Pretty expensive. But we figured we’ll never have this opportunity again, so might as well go for it.

Yesterday, I explained my hypothesis that inflation is coming back.

Another way of saying this: I’m expecting a big devaluation in the value of the dollar and other major world currencies. History’s first globally synchronized inflation. It will lead to a complete re-ordering of the current financial system.

Gold and silver will gain the most because they are the best stores of wealth. And there are huge quantities of wealth currently stored in bonds and cash (what I’ve called “dead money”) that’ll need to be reallocated once inflation starts rising.

Inflation is coming because the Federal Reserve and all the other major central banks are printing money. 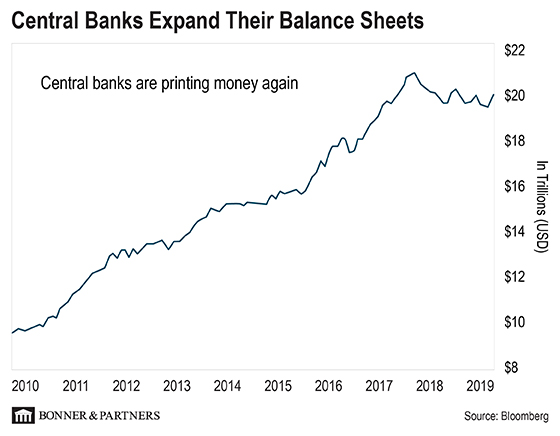 We need to keep watching this chart.

If my hypothesis is correct about the “valuations bear market” and the repo spike being caused by the government’s struggle to find buyers for its debt, we’re about to see A LOT more money-printing…

Someone wrote in yesterday:

Simple. America’s economic business model over the last 50 years has been based on trading blocs and running deficits with other countries, and then having those countries recycle their surpluses back to America by investing in the U.S. government’s debt.

First, it was Europe. Then, Japan and other Asian countries. And finally, for the last two decades, China.

This process allowed the U.S. government to borrow in unlimited amounts extremely cheaply. U.S. consumers and Wall Street both benefited, too.

This process came to an end in 2014, when China stopped increasing its holdings of Treasury bonds. (You can see this in the chart below.) 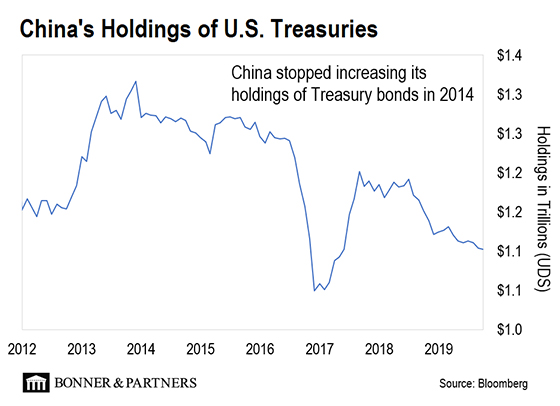 Pressure has been building on government finances ever since. In September 2019, the pressure came to a boil, the repo market spiked, and the Fed had to intervene.

In other words, the Fed is now stepping into the role of financier to the U.S. government.

Get Ready for Heavy Money-Printing

As I mentioned above, foreign holdings of Treasury bonds fell by the most in almost two years in September. And demand for Treasury bonds at auction was the lowest in 10 years.

If my hypothesis on the valuations bear market is correct, the next recession will come soon. When it does, the U.S. government’s appetite for borrowed money will soar, and therefore, so will the Fed’s money-printing.

In other words, we’re poised for a long period of heavy money-printing by the Fed… and this time, I’m betting, it will generate inflation…

…which is why I love to see The Economist suggesting the “end of inflation” on its cover. It means almost no one in the mainstream or popular culture shares my opinion.

On readers’ minds today, the riots in Hong Kong – and what may really be behind them…

Reader comment: Just like everyone else, I am interested in your adventures and look forward to your emails. Our college-aged daughter was going to Hong Kong for an immersion program for three weeks in December, but finally the university (based in the U.S.) moved the trip to Japan instead. My husband and I were happy; why take the risk with the increasing violence?

Not being as adventurous as you, it is not worth it in our minds. Additionally, the university is not allowing students to travel to the Hong Kong campus for the winter quarter starting in January.

All of this is too bad, as I would have loved for our daughter to experience Hong Kong. I enjoyed it very much when I visited in 1997.

Reader comment: I grew up in third-world countries (my dad was an engineer) and can say the experiences gave me a lifelong love of travel and novel experiences… I hope your kids will have this trip as a bedrock of their being.

The essential awareness that tolerance of “others” is a worthwhile goal is something achieved only by actually getting “out there” as you are doing. The drawback (if you want to call it that) is that the West will seem very shallow and superficial. I became very independent, opinionated, and allergic to hypocrisy (especially the religious and political varieties)…

As a footnote to the shootings in Hong Kong your family witnessed: My mother, sister (5), and I (6) were turfed out into the streets of La Paz as a coup was unfolding, and I still remember the bullets raking the wall above my mother’s head as we dashed for cover. Safe travels!!

Reader comment: Just in case you worry about the kids not remembering much about your trip, I would say it won’t be an issue. When I was nine, we moved to Karachi, Pakistan, and we stayed until I was almost 12. I remember most of it, including Europe, Beirut, Damascus, and Karachi.

Even at that age, I could learn about and enjoy different cultures, food, and environments, as I am sure your kids will. Like me, 60 years later they will remember the experience very positively.

Reader question: I say the Chinese are orchestrating the riots to create a pretense for increased control over Hong Kong. Does that sound reasonable to you?

Tom’s response: Yes, it does. I heard that rumor. I also heard a rumor that one faction of Xi’s government has orchestrated them as a power play to undermine Xi.

Reader comment: As you’re wandering around HK, it would be good to hear from some local businesses:

1) Has it become hard to move money out of HK to pay for products they import to sell? Sending money to us has become a fairly big problem for our mainland China distributors who buy our medical products for resale in China.

2) I live in Irvine (Orange County), CA. There is an unbelievable building boom going on here, where complexes of townhouses (no yards, no regular maintenance needed) are being built on every piece of available land. Office and light industrial buildings are being torn down to build these units.
Are you seeing any increased restrictions in China around sending money out of the country to purchase real estate? The Chinese I talk to in China are getting very nervous about the real estate bubble there, and are trying to move money over here.

Thanks for the vicarious entertainment from your adventures.

Reader comment: You mention you don’t have any sympathy for police in HK. And indeed, they may be abusing their power regularly. However, I am currently in Santiago, which is also blessed with protests. And all I can say is you should not be fooled by the saintly image of peaceful protesters. A lot of them are plain criminals.

In HK, they beat an old man recently only because he openly supported China. Protests were peaceful initially. Now they have radicalized.

Reader question: We have been told that hotels only allow three people per booked room in China and in some European hotels. How are you able to get by with five of you? Enjoy reading about your trip. Stay safe!

Tom’s response: It’s not true. We’ve stayed in hundreds of hotels in both Europe and China, and never came across that rule. Maybe it only applies in the expensive hotels?

Reader comment: I don’t think you understand the situation in Hong Kong deep enough. The protest started off as a peaceful demonstration in the beginning, six months ago. Now it’s become so violent it looks like the country’s in a civil war.

The black-cloth-masked rioters destroy subway stations every time they come out in groups, destroy traffic lights, and throw gasoline bombs at police.

Some Hong Kong citizens got so fed up with the disruptions in their daily life that they criticized the rioters. Just a few days ago, a 57-year-old man was arguing with the rioters… One masked man poured gasoline on him, and another used a cigarette lighter to light him on fire.

Anyone who dares to criticize the rioters on the street gets beaten up by the mob. You can find these videos on YouTube.

Tom’s response: I saw that video. It’s horrific. I heard a rumor it’s fake and that man is a stuntman.

Look, you’re right. I don’t understand the situation deep enough. AND I don’t trust ANY of the information I’m being given that is trying to explain or justify what is happening.

I’m not privy to the truth. So I’ll just keep telling you what I see… and let you make up your own mind.

In the meantime, keep sending me your thoughts and questions at [email protected].