FLIPFLOP LOUNGE HOSTEL, CHENGDU – Since I last wrote you, we’ve ridden a bus for three hours, taken two bullet trains, crossed a city by subway, and traveled around 1,100 miles. This journey has taken us nearly 24 hours.

We’re now in Chengdu, the capital of Sichuan Province, in central China. Just arrived a couple of hours ago. I’m writing you from our latest lodging, the Flipflop Lounge Hostel. We’re paying $27 a night for a private room and bathroom with two bunk beds.

Everywhere we go in China, we see these clumps of high-rise apartments under construction. They’re like mini cities. I’m not exaggerating when I say I see dozens of these developments outside EVERY CITY the train rolls through. Hundreds of them in total. Cement shells with cranes on every roof. Here’s an example… 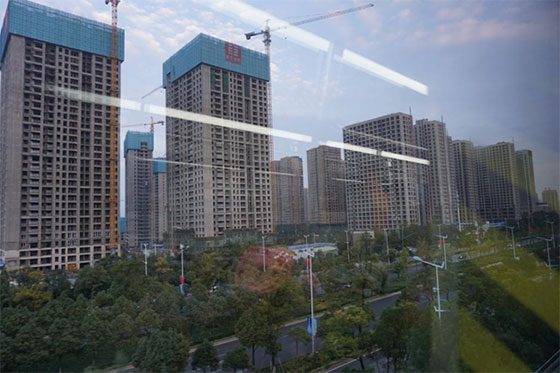 China’s construction boom is apparent in these concrete shells, littered everywhere we go

I’m on a family sabbatical. I’m not supposed to be working. But last fall, the Dow-to-Gold ratio started falling… for the first time in seven years.

Once the Dow-to-Gold ratio gets in motion, it tends to stay in motion. Its drop last fall implied to me that gold would start outperforming the stock market… possibly for as much as the next five or 10 years.

I immediately drained my bank and retirement accounts and put everything into gold and silver. Then, I started nagging my friends and family to do the same. Finally, I approached Bill Bonner and his publisher, Amber Mason. I asked them if I could write to warn you about this, too. They agreed. I started writing these postcards.

The chart below tells the whole story. It shows the Dow-to-Gold ratio going back 120 years.

Notice how it trends, moving in big, clear, predictable waves. Notice how it peaked in 1999 at 41 and how it’s been falling ever since. Notice how the primary trend got interrupted in 2011, and the Dow-to-Gold ratio rebounded. And finally, notice how the ratio peaked in October 2018 at 22.36 and started falling. 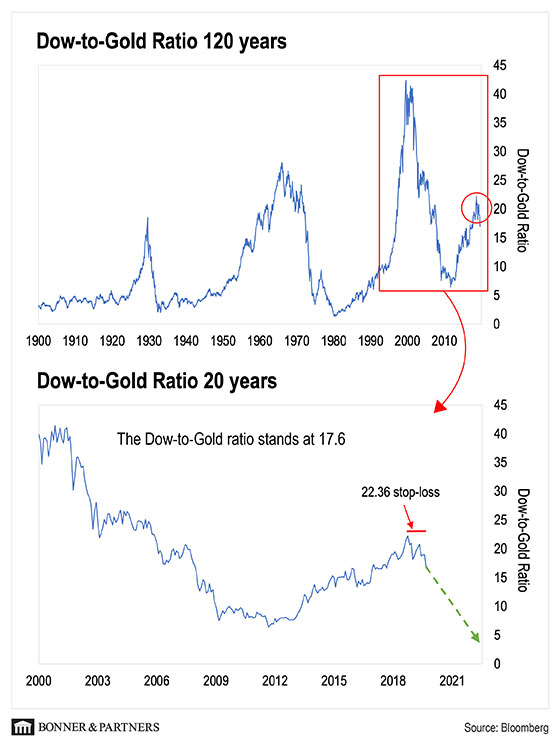 My hypothesis is that the Dow-to-Gold ratio is now back on its way down… to a level somewhere below 5. Bill calls this its “rendezvous with destiny.”

I will hold my gold until then, at which point I’ll sell it all and invest the proceeds into the stock market. Specifically, I will buy what I call “dividend aristocrats,” which are companies like Coca-Cola, Johnson & Johnson, AT&T, etc. They have decades-long track records of relentlessly raising their dividends. There are no better passive investments than stocks like these.

Anyway, that’s all in the future.

For now, my only job is to keep an eye on the Dow-to-Gold ratio (and to continue enjoying my sabbatical).

P.S. I could be wrong about all this. The waves could be just a lucky pattern, and there will be no “rendezvous with destiny” below 5. But I don’t think so. One look at The Wall Street Journal provides all the evidence I need – insane government deficits, central banks around the world competing to debase their currencies, global growth turning negative, stock markets near all-time highs, and a near-universal faith in central bank activism.

It’s a perfect recipe for a much lower Dow-to-Gold ratio. Ignore this chart at your peril.

P.P.S. Here we are hiking Tiger Leaping Gorge this weekend… 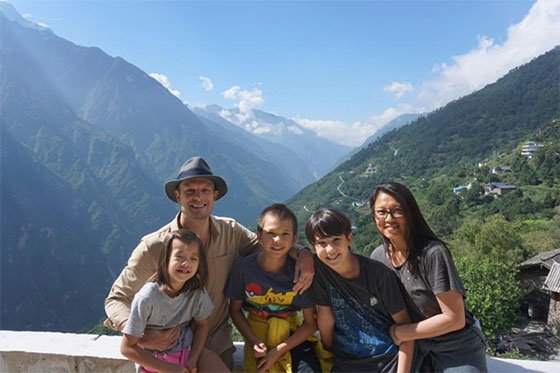 Reader question: How can you live so carefree? I am also divorced with two children, both eight years old. Life must be more grounded for me.

Tom’s response: The more relevant question for us is, how can we NOT live so carefree? I feel so close to my children. I’m relaxed and stress-free. We’re living on $50-$75 a day. And we’re doing something extraordinary that I know I’ll never regret. I’ve never been happier in my whole life.

Our trip around the world ends in four months. Then what will we do? We have no home. No place to go back to.

Reader question: What urged you to live this way? Was it just for the experience or something you thought about for some time?

Tom’s response: This trip was an act of pure spontaneity. I was in South Africa, curing my depression. Kate was in Florida with the kids. One day she said to me, “I want to take the kids on a road trip to see the national parks.”

(We’re divorced. We’ve spent the last five years living separate lives with new partners, passing the kids back and forth at weekends like most other divorced couples.)

She thought about it for a few days. Then she said yes. So I flew back to Florida, rented a campervan, and off we went. That was in May 2018. We’ve never looked back.

Now we live out of a suitcase. We don’t have any possessions (except what we can carry). We don’t have any cable bills, utility bills, cell phone bills, car payments, auto or medical insurance premiums, or any other obligations (except a Netflix subscription). And we go wherever we want (mostly cheap countries with low currencies).

Oh, and we’ll get remarried next year.

Reader question: Have your kids adapted well to this new way of living? It sounds great as long as they are still being educated along the way. Hope this experience for both you and the kids is fulfilling.

Tom’s response: Kate and I were just discussing this today after our 24-hour, thousand-mile public transport marathon with less than eight hours of rest. The kids were perfect. They never complained. There were no meltdowns. They were quiet and calm the whole time.

And for an added bonus, they’ve taken responsibility for our luggage. Miles (9) managed the big suitcase by himself for the whole trip… up and down escalators, on and off trains, along busy sidewalks, etc… he never faltered.

We do school every day, for at least four hours, even when we’re on the road, like today. Kate is a patient and dedicated teacher/supervisor. In my opinion, the kids are getting the best education money can buy. The only thing the kids are missing is having friends.

Reader question: I found your Dow-to-Gold ratio bet brilliant in its simplicity. I’d like to learn more. Or is there nothing more to know other than that the ratio is at 18, so it’s time to sell my stocks and bonds and ETFs and buy gold?

Tom’s response: The brilliance of my Dow-to-Gold trade is that I don’t need to concern myself whether stocks are going up or down or gold is going up or down. Only that gold performs BETTER than stocks.

I want to own stocks. There’s no better passive investment than a great business with a long track record of respecting shareholders. But I think I can accumulate more stocks later by owning gold now and waiting for the Dow-to-Gold ratio to hit 5.

I can’t comment on your personal situation. But I can tell you I’ve been nagging my family and friends to lighten up on their index ETFs and robo-funds and buy some gold. I’ve had only limited success. Buy-and-hold index investing is so deeply ingrained in our consciousness. And people just won’t buy gold.

Reader question: Can you shed more clarity on this statement you wrote last week?

“The real story here – the one no one’s talking about – is the Fed has begun monetizing the government debt for the first time since WWII.”

How is this different from QE1/QE2, etc.?

Tom’s response: This is very important.

In the past, the Federal Reserve used quantitative easing (QE) to stimulate economic growth, promote inflation, and ease lending conditions. Its efficacy is debatable, but the point is, the Fed chose to introduce these programs. It didn’t have to.

Today, the Fed is being forced to inject liquidity because there aren’t enough dollars in the system. The government’s obscene demand for cash is – quite simply – overwhelming the banking system.

In other words, the Fed is now buying the government debt because there aren’t enough other buyers.

There is no way out of this unless a) the government severely cuts its spending or b) another source of demand materializes, neither of which is going to happen.

So now we get to watch the Fed’s balance sheet grow bigger and bigger every month, ad infinitum.

To repeat something I’ve said again and again in these postcards, I don’t know exactly how all this is going to play out. I just know the system is terribly broken – beyond all repair – and I want out. That’s why we dropped out of the financial system and put all our money in gold.

Reader question: I enjoy reading your Postcards From the Fringe. It’s a nice daily break for me to read your post. I feel like traveling with you to your unknown places. Please keep the postcards coming!

Last week, you mentioned high cash value insurance. Could you explain what that is and how it fits into your investment objectives? I was in a conference call last night with a financial advisor, and he was telling me about universal life insurance, a type of permanent life insurance, and how it works to fund my kid’s college education and will provide income for our future retirement. I wonder what and how high cash value insurance works, on the other hand.

Tom’s response: First, I wouldn’t touch any life insurance product except whole life, which is the original, most basic, most vanilla type of permanent life insurance. It’s also got the lowest fees and is the easiest to understand.

Also, I wouldn’t buy it unless I was committed to holding it until death. (If you surrender it early, the insurance salesman wins.)

I see it as a bond that matures upon my death, and every year I get older, and closer to death, the cash value compounds a little bit (because I’m a year closer to realizing the full maturity value).

“What good is it owning a bond that matures upon your death?” you ask. Well, you can borrow against the cash value. It pays a rising dividend. And capital gains are tax-free.

Moving on to today’s last question… I received lots of messages from you this weekend asking about my specific investments in gold and silver. To avoid repetition, I chose one letter and answered that. If it doesn’t answer your question, or if you have more questions about this, please feel free to write to me at [email protected].

Reader question: I just read your Postcards From the Fringe for the first time. Did you buy gold coins or gold stocks? Which coins did you choose, and why did you select them over the hundreds of other choices available?

Tom’s response: I bought the cheapest physical gold I could find. I looked at Krugerrands, Maple Leafs, even Chinese Pandas. I looked into buying gold bars. I called a handful of different dealers. And I calculated the price I was paying per ounce of actual gold. (Some coins aren’t pure gold.)

In the end, I found one-ounce American gold coins from the late 19th century and early 20th century were just about the cheapest way I could buy physical gold.

I was the type of kid who loved finding and collecting old pennies, so I went for the vintage coins over Maple Leafs, Gold Eagles, etc. But I wouldn’t have done this if they weren’t also the cheapest way of buying physical gold.

I also bought a basket of “blue chip” gold and silver mining stocks and a silver ETF.