Those of you who have been with Inside Wall Street since the start of this year will know that I pop up in a lot of places and cover many miles.

I write many of these pieces on jumbo jets.

That’s because I believe that the best way to glean the most accurate information about what’s going on in the country and the world is to be on the ground.

That’s the investigative journalist in me.

But all around the world, the airline industry is being heavily impacted by the energy crisis I wrote to you about yesterday.

I’ll tell you all about that today.

Before I do, though, I just want to quickly remind you about my Running on Empty Summit at 8 p.m. ET TONIGHT.

It’s just a few hours away. I hope you can join me.

Now, back to today’s essay about the huge impact rising energy costs are having on the airline sector… how this is likely to get worse as the energy crisis deepens this winter… and what you can do to protect your portfolio.

Across the Atlantic and Back in Time

My next trip outside of the U.S. will be to the U.K.

I spent seven years of my investment banking career as a Senior Managing Director at Bear Stearns in London.

I created my own team of 29 incredible analysts there. I’m looking forward to having dinner with some of them while I’m in London next month. There will be drinks and stories! You’ll be seeing my updates from there soon.

And I’m happy to say my team here is equally awesome. We’re working on some tremendous analysis and strategies. We’re really pushing the envelope of what people like yourself can access for your own investment portfolios.

All that brings me back to one of the sectors that will struggle the most under rising fuel costs – airlines.

The Plight of Flight

As I prepare to travel to the U.K., I discovered that earlier this month, its premier airline, British Airways, announced it will cut 10,000 flights this winter. It attributes this action to staffing issues, strikes, and rising fuel costs.

And last month, Heathrow Airport set a limit of 100,000 on the number of passengers departing from the airport every day.

This measure was originally supposed to be in place until September 11. But airport management recently extended that until at least the end of October.

Back in 2018, the airport regularly had 220,000 passengers arriving and departing every day. But it just doesn’t have enough staff to handle the huge volume of departing passengers anymore.

These sorts of occurrences don’t make it easy for people to plan trips.

As well as that, airlines are struggling because they have fewer pilots and staff since the pandemic. That’s why they’ve had to cut routes.

Adding to travelers’ woes, they are now more likely to face delays or flight cancellations than before the pandemic.

And the incidences of delayed or lost baggage have reached epic proportions all over the world.

Take a look at what’s happened in the industry here at home during the first five months of 2022.

And yet, ticket prices rose…

Raging inflation has touched nearly every economic aspect of our lives. Prices have soared on all goods and services covered by the U.S. Consumer Price Index (CPI).

So naturally, air travel costs rose as well. The U.S. Department of Transportation’s Bureau of Transportation Statistics notes that the average cost of a plane ticket in the first quarter of 2022 was 16.9% more expensive than in the same quarter in 2021.

The Federal Reserve Bank of St. Louis tracks factors that contribute to the CPI number. It says airline ticket prices have risen by nearly 28% this past year, far outpacing the rise in average inflation.

That’s the largest annual jump in ticket prices since the St. Louis Fed began tracking the CPI in 1989.

If you add up all those fares, over the past year, total air travel costs for passengers have risen by an average of about 82.4% globally.

The Number One Airline Problem

Since the pandemic restrictions were lifted, travel demand has rebounded, especially in 2022.

But airlines have been dealing with the dual problem of worker shortages and a high demand for travel. That’s why they’ve cut flights and jacked up fares.

And that would ordinarily mean huge profits for them.

But fuel costs account for about 30% of an airline’s total expenses. So the huge spike in fuel costs this year that I wrote to you about yesterday is eating away at much of the airline industry’s revenue.

Now, the price of jet fuel reached record highs earlier this summer. It dropped back in July. But it has begun to climb again, as you can see in this chart of the Jet Fuel Price Index. 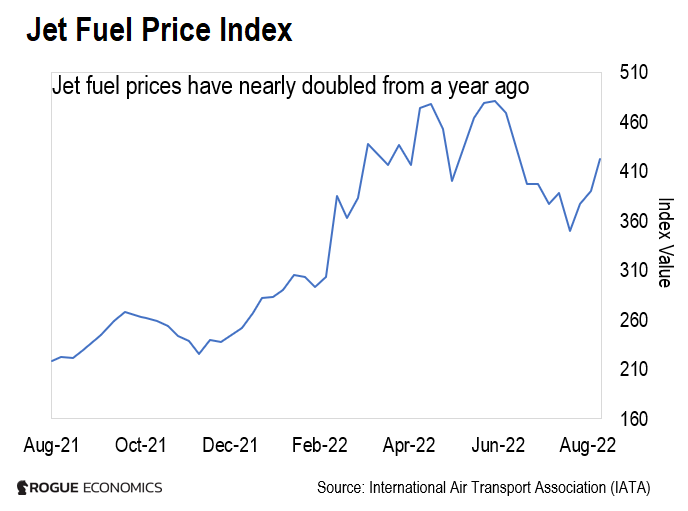 And as I discussed in yesterday’s essay, global fuel prices are set to skyrocket this winter.

That’s because Russia said it will halt movement through its key Nord Stream gas pipeline for three days of repairs starting today, August 31.

It was also closed for 10 days in July and is operating at about a fifth of its capacity. People fear that Russia could shut off supply entirely as winter approaches.

Across Europe, politicians have been warning citizens to brace for a rough winter and an energy crisis.

Meanwhile, they’ve been negotiating ways to combat the energy crisis.

And the markets seem confident that the European Commission will intervene in energy markets. Gas prices eased off yesterday.

But they’re still comparatively high. For example, the Netherlands benchmark price for European natural gas – called Dutch TTF – is still quadruple where the peak values were ahead of the pandemic.

And the threat of rising energy prices still hovers as we approach the winter months.

With the official start of the winter heating season around the corner, nations are rushing to fill natural gas storage sites. But they remain heavily dependent on Russian fuel.

Here at home, U.S. natural gas prices are already up 30.5% relative to a year ago. Earlier this month, they hit 14-year highs.

And as I wrote yesterday, if prices spike because of what’s happening overseas, you can bet they will spike in the U.S., too. That’s because fuel markets operate on a global level.

All of this will lead to higher jet fuel prices and more pain for the airlines.

The airline sector won’t do well during the energy crisis coming this winter, even if it jacks up fares like it always does.

So my recommendation to investors is to avoid the sector altogether.

But it’s not just airlines that are feeling the pinch from higher fuel costs.

Online retailer Amazon relies heavily on airlines to transport packages. It has already lost over $132 billion this year to inflationary pressures.

When you deliver over 4 billion packages to doorsteps across America each year, the cost of fuel plays a huge role in your bottom line.

But what if companies like Amazon had a way to eliminate fuel and gas costs altogether? That’s exactly what one small firm has discovered.

Tonight at 8 p.m. ET, I will be holding a special energy crisis summit to give you all the details. It’s called the Running on Empty Summit.

And I’ll give you details on the company I mentioned above, and show you how you can invest before the rest of the world catches on to its huge potential…

I urge you to sign up so that you can get ahead of this crisis.

I really hope to see you there!

P.S. Avoiding airline stocks isn’t the only thing you can do to protect your money right now. At tonight’s Running on Empty Summit, I’ll share my FULL list of the top five sectors that will go down… and the top five that will go up as we head toward winter.

So save your spot now… and be sure to join me TONIGHT at 8 p.m. ET.