It’s been a wild ride for the energy markets this year. But that’s likely to be just the beginning…

I’ve written a lot about the energy crisis in recent weeks.

And with energy prices up 33% in the last year, I hope you’ve been keeping up with my essays…

I’ve shown you why rising energy prices will lead to higher food prices.

And I’ve written to you about the energy-related factors that will drive fertilizer prices up… which will catapult food prices higher, too.

These are two subtle ways the energy crisis is hitting your wallet – beyond gas prices at the pump or the cost to power your home.

See, experts predict we could see an even bigger “energy shock” this winter.

And if you know where to look, you can protect your portfolio – and profit.

I’ll do a deep dive into the coming “energy shock”… and what you can do to prepare.

You can reserve your spot for free here.

Until then, read on…

Below, I’ll tell you what you need to know about the energy markets today. As you’ll see, there’s a global transition happening right now – and it has major implications for investors…

Now, I know not everyone feels the same way about climate change.

But no matter what your views are on environmental matters, what’s coming down the tracks brings with it a huge opportunity to profit…

See, global governments put a price tag of up to $150 trillion on their plans to reach COP26 goals.

And this year, the war in Ukraine has been a major catalyst in their push for renewable energy and related technologies.

And in April, the European Union (EU) followed suit. It proposed a ban on Russian coal imports. That ban went into full effect this month.

The EU also adopted a partial embargo on Russian oil in June.

That embargo will ban seaborne imports of Russian crude oil as of December 5. And it will ban petroleum product imports as of February 5, 2023.

If the EU follows through with the oil and petroleum sanctions, that will undoubtedly lead to fuel shortages and price hikes across the bloc.

That means the EU’s 27 member countries must now find alternative ways to power their economies… and fast.

And if the EU goes ahead with its Russian oil ban this winter, we can expect further price increases here. That’s because all these sanctions have global ramifications on oil and gas prices.

So the race to ramp up production from renewable energy sources is on, both here and across the pond…

The world’s governments have accepted that climate change is real. And this is unleashing a massive new investment trend.

I call that trend New Energy. It’s one of the five distortion profit themes I follow for my readers. And since 2021, it’s gotten a big boost.

Just take a look at some of the recent numbers…

And right now, the money spigots have been well and truly opened for New Energy… and energy transitions to upgrade older energy technologies…

Which spells opportunity for investors.

Take a look at the chart below. It comes from the U.S. Energy Information Administration (EIA). And it tracks the trend of energy consumption needs globally through 2050… 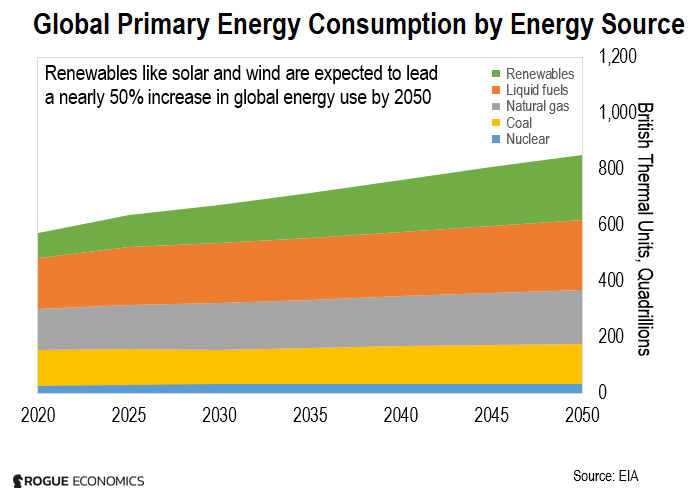 This chart shows the growth in renewable energy (green line at the top) as well as traditional energy sources.

As you can see, the projection is for a 50% growth in the New Energy space. And we’re already seeing rising demand…

2021 was another record year for renewable energy, according to the International Energy Agency (IEA).

The world added a record 295 GW of new renewable power capacity in 2021. That was despite the pandemic and rising costs for raw materials globally.

But from the chart above, we can also see that traditional energy isn’t going away anytime soon.

But the major growth will be in the renewable energy sector.

So as the energy crisis unfolds… and the EU and the rest of the world exert more and more pressure on Russia… I will pay close attention to New Energy companies.

I’ll do a deep dive into the energy crisis… and what you can do to prepare your portfolio ahead of the “energy shock” that could hit this winter.

I’m calling this event the Running on Empty Summit. And I’d love it if you could join me. You can reserve your spot – for free – here.

P.S. It’s not just American households that are feeling the pinch on account of the energy crisis. Some of the biggest companies in the world are suffering, too… including Amazon.

Rising energy costs are causing Amazon’s shipping costs to go exponential. At my Running on Empty Summit, I’ll reveal the name of the small firm that could help Amazon cut its gasoline costs to zero. Plus, I’ll give you my recommendation on Amazon – whether it’s a buy, sell, or hold.

If you want to find out more, be sure to tune in. Click here to reserve your spot.