Earlier this summer, I put my boots on the ground across the American Midwest…

I stopped in half a dozen towns – including Chicago, Indianapolis, and St. Louis.

One of my stops was in Cleveland, Ohio.

The city sits on the southern shore of Lake Erie. And it’s home to the Federal Reserve Bank of Cleveland.

Nomi visits the Federal Reserve Bank of Cleveland, built in 1923

This Fed is in a gorgeous, fortress-like building dating back to 1923. And it contains the largest bank vault door in the world.

But as much as I love history, I wasn’t there for a tour.

It’s the research that goes on inside that building that drew me to travel all the way from my home in Ojai, California – 2,400 miles away.

Wall Street uses that research to look beyond the headlines – and to understand real trends.

Today, I’ll show you how you can take advantage of it, too.

Looking Beyond the Headlines

That district includes Ohio… along with parts of Kentucky, West Virginia, and Pennsylvania.

This district is home to 17 million people. It covers a significant portion of America’s Rust Belt.

The Cleveland Fed regulates the banks in its territory. Some of them – like the National City Bank below, now owned by PNC – have been around since the 1800s.

Inside the National City Bank, the oldest bank in Cleveland

The Cleveland Fed also supports electronic payments to the financial institutions in its territory.

Wall Street looks to the Cleveland Fed for its crucial research on inflation.

See, this regional Fed is home to the Center for Inflation Research.

The Center publishes a monthly data series on alternative measures of inflation. This series digs beneath aggregate and generalized inflation figures.

I got my start examining the truth behind the average numbers and looking at data patterns.

What I looked at – and expected my team to build from – were numbers and figures that were mostly ignored or overlooked.

That’s because if you look where others aren’t looking, you can understand trends in a deeper way… And you can see what’s driving them.

The secret to success is to have an “undying and unquenchable thirst for information and knowledge.”

Jones is one of the most celebrated hedge fund managers ever, with billions of dollars under his belt.

And I could not agree more with him.

It’s why I’ve carried my habit of looking at data, as opposed to headlines, with me through my 15 years on Wall Street… and into my work as an investigative journalist over the last two decades.

Which brings me back to the Cleveland Fed… and the key role its inflation research plays right now.

Inflation and monetary policy are core topics in the news – and in our lives – today.

So it’s important to understand the real numbers behind the ones we see on the mainstream media.

And for that, I turn to the Cleveland Fed.

But the median CPI is slightly different. It measures the one-month inflation rate. It’s often more accurate at forecasting inflation than the more common CPI.

That’s because it ignores short-term volatility.

Here’s what that means…

Let’s say big storms hit the Gulf of Mexico and Texas, and oil prices spike as a result.

Oil prices are a big part of the headline CPI numbers. But the median CPI won’t let those temporary price spikes have too great an impact on its results. 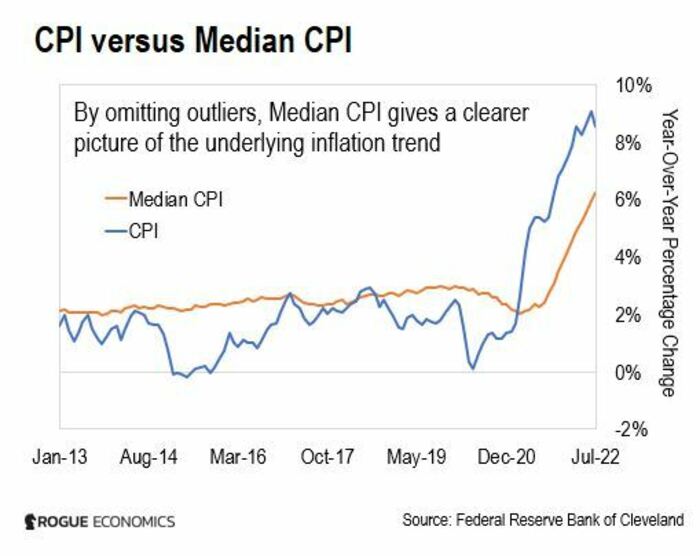 That tells me overall inflation remains on an upward path, but at a slower pace.

If that trend continues in the August CPI figures (to be released on September 13), it will likely give the Fed enough reason to be less aggressive at its next meeting later that month.

As I said on Fox Business recently, I think we will see the Fed raise rates by less than 0.75% in September.

What This Means for Wall Street and Your Money

It also produces something called an inflation “nowcast.”

This forecasts inflationary measures before all the official data is released. It provides estimates in real time for businesses and policymakers to use.

And it’s free for anyone to track on its website.

All these factors are ways to not only measure inflation, but to understand coming trends.

For everyday people – like the blue-collar workers in this region – these numbers drive personal and business decisions.

As for Wall Street?

Watching data from places like the Cleveland Fed helps them avoid certain sectors at times that are too volatile.

And it helps them understand the real trends… without getting too lost or caught up in the headlines.

Savvy investors can do the same.

P.S. I learned an important lesson during my 15 years on Wall Street… And that is that the smart money always looks beyond the headlines.

Today, my boots-on-the-ground research takes me to hidden corners of the markets – ones the mainstream media chooses to ignore. And by far one of the biggest trends I’m seeing beyond the headlines is happening in Middle America…

See, central banks around the world – including the Federal Reserve – are making moves right now that could lead to a $40 trillion transfer of wealth. Those moves could forever split our country into two groups – the “new rich” and “the new poor.”

And some Americans could find themselves living in a “Permanent Recession.” For all the details, check out this video presentation I put together for you.