Aluminum prices are about to explode on future supply shortages.

This is a big development, and yet very few people are talking about it.

Earlier this month, Goldman Sachs lifted its price forecasts for aluminum to $3,125 per ton during 2023.

Their reasoning? The reopening of China and stronger demand for metal in Europe.

Now, here’s the thing I learned about Goldman – one of the most powerful investment banks on the planet – from my experience working there…

They rarely make forecasts that bold unless there’s a lot of data backing them up. And when it comes to commodities, Goldman tends to get it right.

One reason is its history.

Back in 1981, Goldman acquired a company called J. Aron. It was a specialty commodity brokerage firm that had been around since 1898.

That was before Goldman hired me as a managing director in 2000. But it was the J. Aron managers that rose to the very top of Goldman.

Much of my direct chain of command at Goldman was comprised of Aron alumni. They knew commodities then.

And even though many of them have retired with significant amounts of money… their ethos in the commodities space remains alive and well at Goldman.

However, as usual, there’s more to the story.

So today, I want to shed light on what’s happening in the aluminum markets right now. And I’ll give you a one-click way you can position yourself for profits.

Shortages have become commonplace over the past one to two years. You’ve probably read a lot about global supply troubles in everything from drugs to computer chips.

But what you’re not hearing about is that the world is also running critically low on the basic materials that make almost everything we use.

Global aluminum supplies have been evaporating. Stockpiles around the globe have been taking hits from all directions since the pandemic.

And aluminum inventories are now at their lowest levels since 2002.

According to Goldman, global inventories, at around 1.4 million tons, are down by almost 900,000 tons from a year ago.

That’s really something if you consider that the metal already faced a steep shortfall in stockpiles in 2021-2022.

The so-called “aluminum can shortage” happened because more people were drinking at home during and after the Covid lockdowns, rather than going out. That led to a shortage of aluminum to make cans.

It’s different this time around though.

I’ve already mentioned Goldman’s argument that higher demand from Europe and China could trigger scarcity concerns in the aluminum market.

But that’s just one side of the coin.

You see, making aluminum requires a lot of energy. So much that aluminum smelters are normally built in places with access to cheap power.

But the Russian-Ukraine War threw a massive monkey wrench into all that.

The conflict led to a massive rise in energy costs, and the resulting supply crunch spiked aluminum prices at the beginning of 2022. 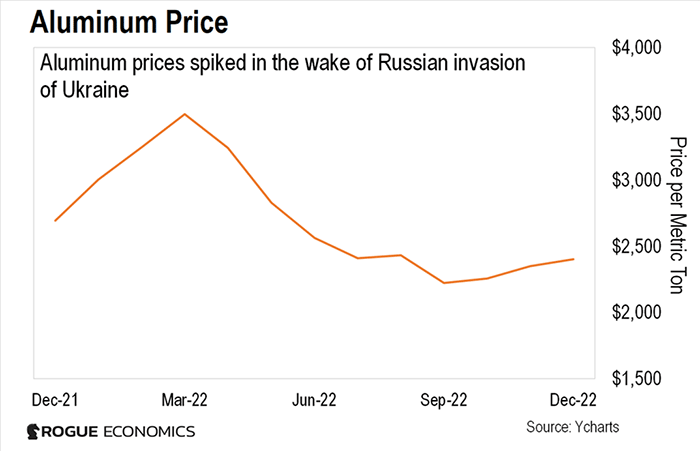 As you can see in the chart above, the price of aluminum hit peaks in February 2022, following Russia’s invasion of Ukraine.

It has since fallen, though. And with natural gas going through the roof, many aluminum smelters are facing huge losses.

We’ve seen a slew of headlines about power shortages in Europe shutting down aluminum refineries.

Take Norsk Hydro, for example. It’s one of the biggest aluminum producers in the world, and it shut down primary production at one of its plants last fall. Europe’s top aluminum plant, Aluminium Dunkerque Industries France, cut output by 22%.

Meanwhile, in the U.S., we’ve gone from having 23 operational aluminum smelters in 1993 to just six today. And most of these are running far short of maximum capacity. In fact, these facilities were running at about 50% capacity as recently as 2021.

I expect all this will probably get a lot worse as the energy crisis hits harder amid the ongoing war in Ukraine.

Now, it’s true that aluminum prices went up lately. But it’s not enough to cover higher energy costs at smelters.

Could refineries in places like China make up for the missing production? They might to a certain degree…

But China, too, has been struggling with power problems, most recently in the hydro-rich provinces of Yunnan and Sichuan.

There’s also one factor that plays something of a wild card in this story, and that’s the West’s potential ban on Russia’s aluminum.

In November 2022, the London Metal Exchange (LME) decided against banning supplies of Russian metal from the bourse.

But with no sign of Russia calling off its war in Ukraine, that “status quo” may not last.

The LME is the world center for the trading of industrial metals. It’s where the majority of all non-ferrous metal business happens.

Put another way, the LME taking such a step would affect all participants in the aluminum trade worldwide. And other marketplaces would likely follow suit.

Russia is responsible for 6% of global aluminum producers. Removing that supply would push aluminum prices way past what Goldman expects.

All the above tells me that aluminum prices are on an upward trajectory. It’s that or we’ll just run out of the metal as more refineries close.

This is a legitimate question given that most people associate aluminum with soda cans. You might be holding one in your hand right now.

But the importance of aluminum in our daily life is far greater.

Only about 25% of aluminum produced worldwide is used for consumer goods. The remainder goes to some of the world’s most important industries like construction, the electric grid, and information technology.

With how important aluminum is, it means that higher prices are much more likely.

A great way to position yourself for rising aluminum prices is with the iPath Series B Bloomberg Aluminum Subindex Total Return ETN (JJU).

It tracks an index of aluminum futures that rolls into new contracts every other month. And it offers convenient exposure to aluminum prices.

P.S. You can also invest in aluminum indirectly by purchasing companies that mine it. If history is any guide, these miners could deliver even bigger profits. And if you like mining companies… and are looking to profit from commodities needed in the new year, we’ve got broad exposure in everything from gold to copper to lithium in my flagship advisory, Distortion Report. My team and I follow trends like this one with aluminum and add new positions to the portfolio every month. Join us today by clicking here.